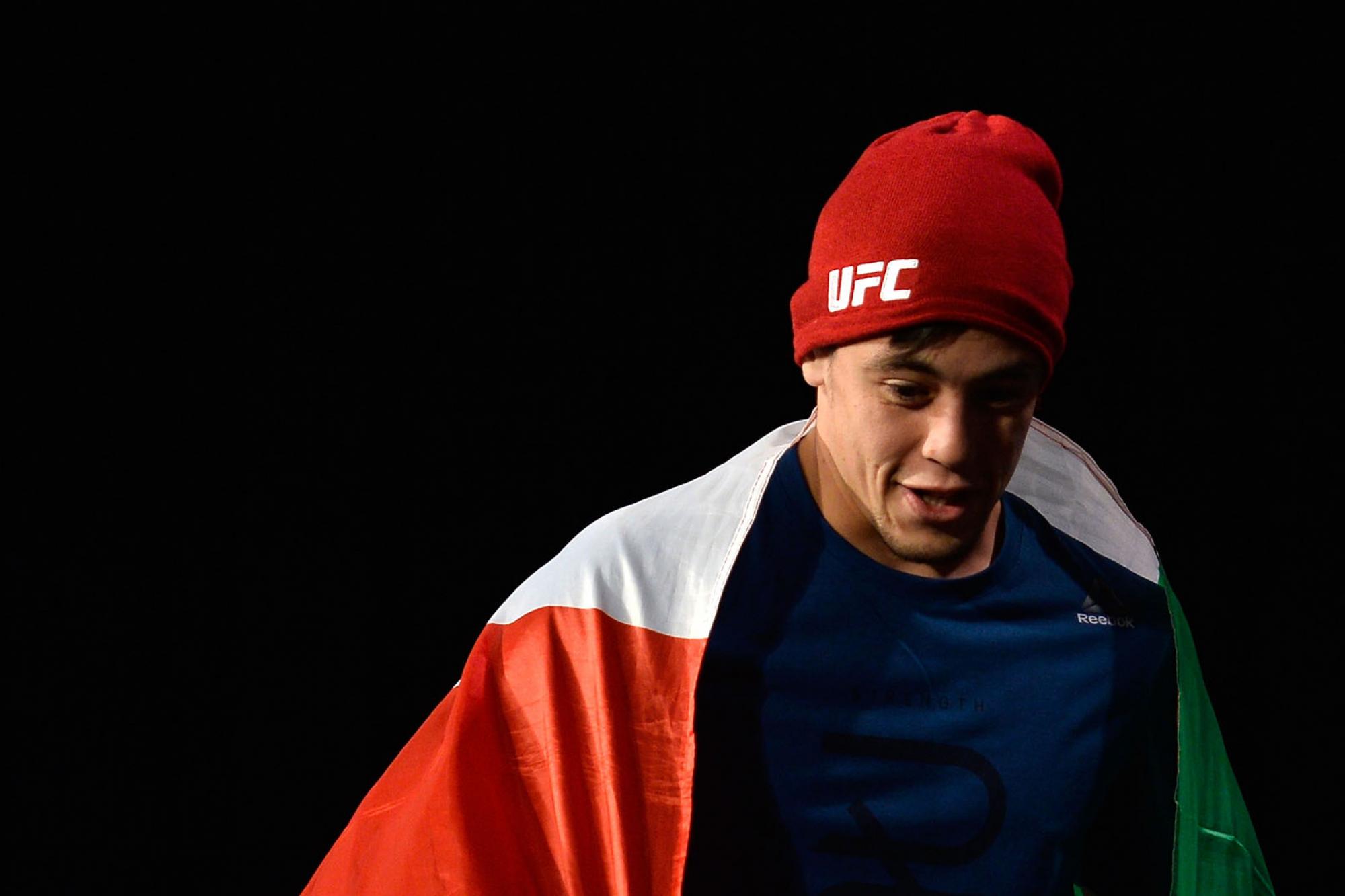 Brandon Moreno will enter the Octagon against Brandon Royval this Saturday as UFC 255’s featured prelim bout. But he doesn’t hesitate to mention he thinks he should have been featured a little higher up in the card, like perhaps in the flyweight championship main event.

“I had a lot of moments before with the promotion. I think I deserve the title shot right now, even before Cody Garbrandt, even before Alex Perez,” he says plainly. “But here I am, and I have an amazing opportunity against Brandon Royval to show my skills; my new skills…I evolve every single day.”

Ever since Henry Cejudo moved on from the 125-pound ranks, the division has been a Wild West of moving parts and moving targets. After a brief, one-fight stint in LFA, Moreno hasn’t been defeated in his three-fight return to the UFC and boasts impressive outings versus mainstays like Kai Kara-France and Jussier Formiga. Even still, Moreno may have to exercise some patience before arriving at his moment, something he understands as he tries to take a longer view. 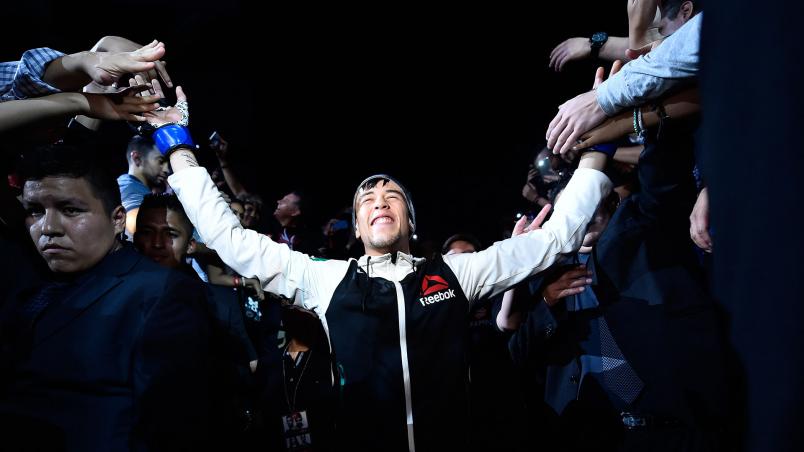 “I want to be the best. Just the best. I don’t need a belt on my belly. If I want one, I can buy one in the UFC Store for $800.” He smiles as he says this, and his expression leaves no wonder why his nickname is “The Assassin Baby.”

MORE UFC 255: Fight By Fight Preview | How To Order | Embedded | Rise Of Alex Perez | Countdown | Fighters On The Rise | Free Fight: Shevchenko vs Chookagian | Inside The Octagon

Free commercials for the UFC Store aside, Moreno has taken an inventory of the talent that surrounds him. He wants to continue his campaign to clean out the division, and if a backup opportunity came to pass, he’d prefer to start his campaign at the top. 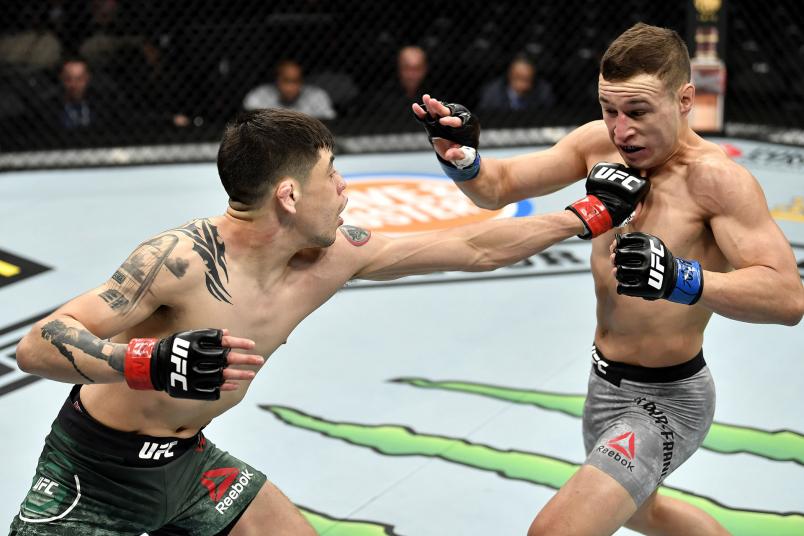 Indeed, Figueiredo is the man holding the belt after finishing Joseph Benavidez in back-to-back outings and wresting the title from him will be no easy task. But as Moreno sees it, the more difficult task will be standing in front of him Saturday night in the form of Brandon Royval.

“Royval is a tough matchup. I need to stay focused on him.” 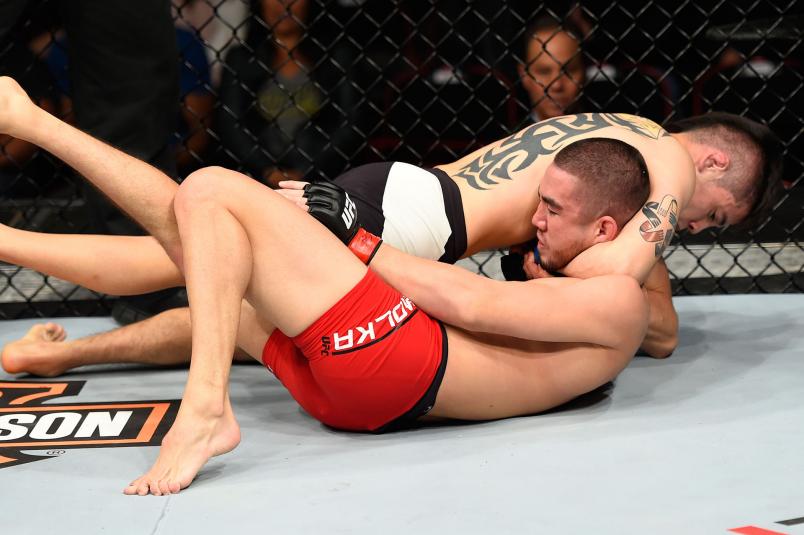 Getting it done vs Smolka, October 1, 2016 in Portland, Oregon. (Photo by Josh Hedges/Zuffa LLC)

Tough is an understatement. Factory X protégé Royval has made quite an entrance into the division with two second-round submissions of seasoned flyweights Tim Elliott and the aforementioned Kai Kara-France. “Raw Dawg” feels like he’s playing with house money, and nobody understands this better than Moreno.

“He’s in a position where he has nothing to lose. That makes people dangerous. I was in the same spot before when I made my debut in the UFC.”

Moreno hearkens back to his 2016 promotional inauguration, a first-round submission upset of veteran Louis Smolka.

“It was short notice. I had nothing to lose against Smolka, and I feel very dangerous in that moment, and I beat a very fast Smolka. I think Brandon Royval is in the same spot just like me before. And I know he’s dangerous for that.”

Watch Moreno vs Royval in the featured prelim slot of UFC 255. Prelims kick off at 8pm ET/5pm PT on ESPN2 and ESPN+