Burgos loss didn't make him hungry, it made him starving 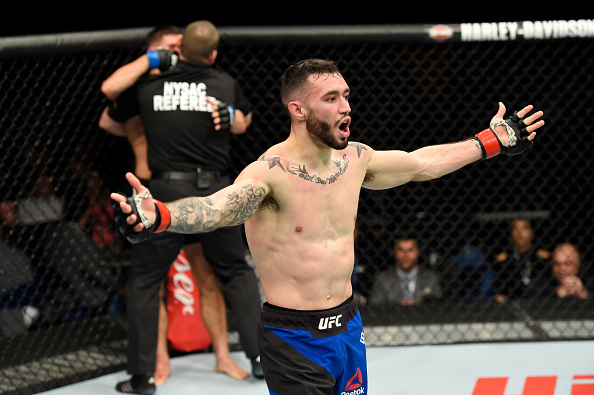 Every fighter hates losing. But featherweight prospect Shane Burgos REALLY hates it. So much so that when he suffered a takedown to Charles Rosa in their 2017 Fight of the Night battle, he nearly considered it a defeat, even though he won the fight.

So imagine how the Monroe, New York product felt after his first MMA loss to Calvin Kattar in January. Again, it was a Fight of the Night award winner, only this time it was Burgos on the short end, as he was stopped in the third round by the New Englander. And no, he didn’t accept it as just one of those things.

“It was tough,” said Burgos. “That’s the first loss I ever had as an amateur or as a pro, so it was definitely a struggle mentally because I never saw myself losing, let alone losing the way I lost. I thought the fight was just starting to go my way after the second round, and in the third round I was getting ready to pick it back up and I got no excuses, I got caught.”

It happens. To everybody. And Burgos wasn’t fooling himself into thinking he was going to run over the featherweight division for the next ten years without running into someone who had his number on a particular night, but he didn’t see the Kattar loss coming.

That’s the past, and if there is any consolation for Burgos, it is that Fight of the Night bonus and knowing that his stock didn’t drop in defeat. Of course, that’s the view from the outside.

From the 27-year-old’s perspective…

“I appreciate that, but it’s me,” he said. “Even though my stock didn’t drop to anybody else, it dropped to me and it just pissed me off. I have to work my way back up.”

That work begins on Saturday night in Madison Square Garden when Burgos faces Kurt Holobaugh at UFC 230. It’s the kind of matchup that could put another bonus check in the New Yorker’s pocket, and that works for him.

“It’s a great matchup,” Burgos said. “I feel like the fans love my style already, and his style is somewhat similar to mine and I actually like the way he fights. I think we’re gonna meet in the middle and may the best man win. But I’m gonna do everything in my power to get my hand raised and leave that cage victorious. It’s been too long since I won a fight and I’m hungry like I’ve never been hungry before.”

“As corny as it sounds, everyone always says a loss makes you hungry, but it got me starving,” he laughs. “I’ve never felt this kind of hunger in my life. As soon as I was good to go, I started running sprints, I did distance runs, and I’ve been wanting to fight since July, so it seems like forever that I’ve been training for this one.”

Add in the fact that he’s got his Tiger Schulmann Fight Team squadmates Lyman Good and Julio Arce fighting on the same card, and there’s plenty of motivation to get things done for himself and the team.

“There’s always good energy in the room, but especially when we’re fighting together or close to the same time, we’re all focused, we’re all training super hard, and fighting with my teammates, I love it,” he said. “It puts more pressure on because you don’t want to be the one to lose, but I love the pressure and I love fighting alongside those guys. We haven’t really spoken about it, but I think we’re all going out there to make a statement and represent.”

For Burgos, there’s only one statement he can make and that’s getting a win. There is no other option as far as he’s concerned.

“I’m just so competitive,” he said. “I hate losing in anything. I hate losing in a game of tic-tac-toe. I’ve always been like that since I was a young kid. I hated losing board games. I just do not like to lose.”