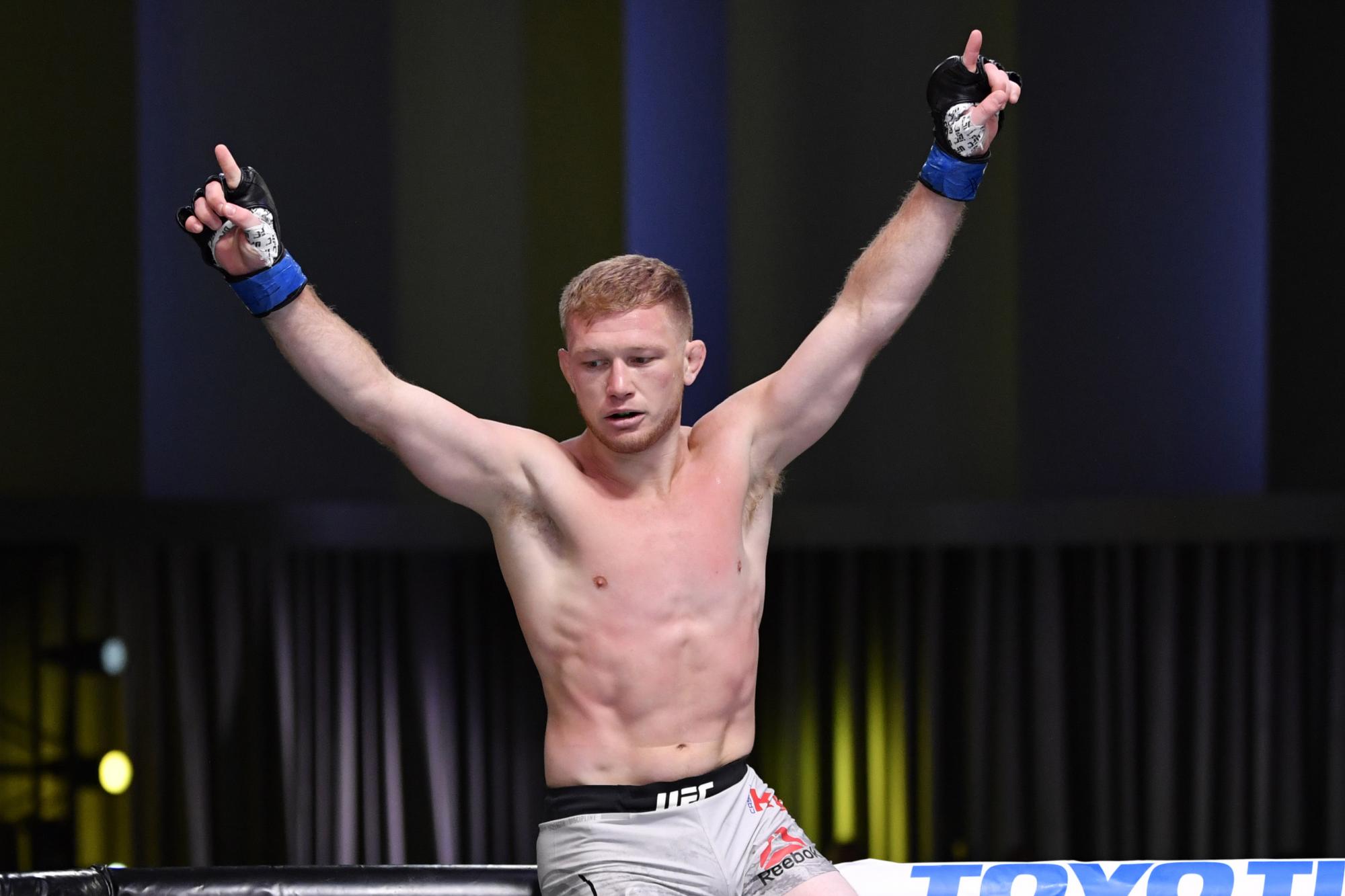 Casey Kenney: Have Gloves, Will Travel

Rising bantamweight star Casey Kenney has fought twice in 2020. On Saturday, he makes his third walk of the year against AlatengHeili. Not a bad schedule, but Kenney isn’t satisfied, and he means that in the most respectful way possible.

“This is the year of the quick turnaround, and I guess I haven't been screaming it loud enough, so I might have to get a little louder this time,” said Kenney, who jokes of putting out a petition for him to stay on Fight Island after this weekend’s bout just in case someone falls out of a fight on one of the cards in Abu Dhabi this month.

He means it, too, but if you doubt his intentions, he has a reminder 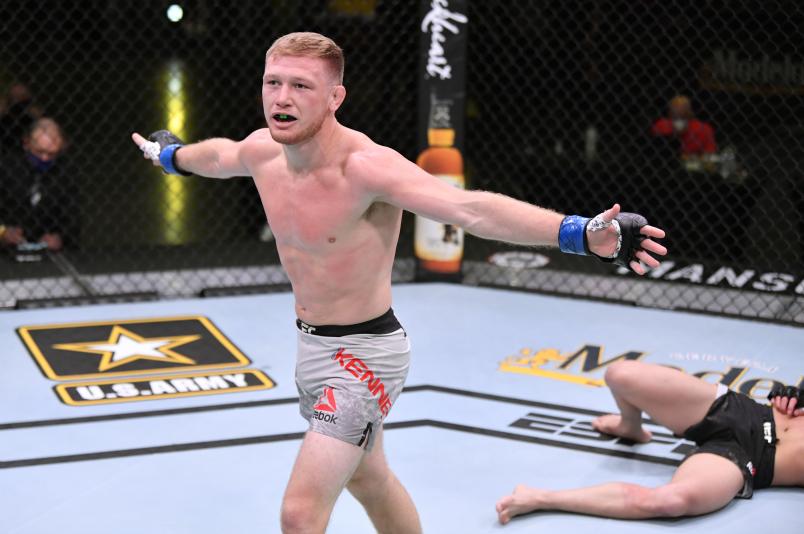 LAS VEGAS, NEVADA - MAY 30: Casey Kenney celebrates after his submission victory over Louis Smolka in their bantamweight fight during the UFC Fight Night event at UFC APEX on May 30, 2020 in Las Vegas, Nevada. (Photo by Jeff Bottari/Zuffa LLC)

“I made my (UFC) debut fighting back-to-back weekends and I fought a guy (Ray Borg) that fought for the title for my debut,” said Kenney. “That's my world.”

That attitude puts Kenney firmly in the camp of “have gloves, will travel” that has been the motto of so many in this new normal during the COVID-19 pandemic. Yet there are fighters who aren’t interested in the short-notice call, opting to stick to a two-to-three per year schedule.

“I completely understand that,” he said. “Maybe down the road it will turn into something like that, but I'm a young, single guy that's hungry as can be and I've been eating, breathing, living fighting for the last eight years and that's what I want to do. I do a pretty good job of taking minimal damage and getting ready to get back in there and staying ready, so why not fight once a month? The paychecks keep getting bigger, so I want to change my life.”

Did I just hear Kenney imply that getting married and settling down would slow his fighting career?

“I hope not,” he laughs. “But that's why I gotta push it off to the side because I do think it slows some people.” 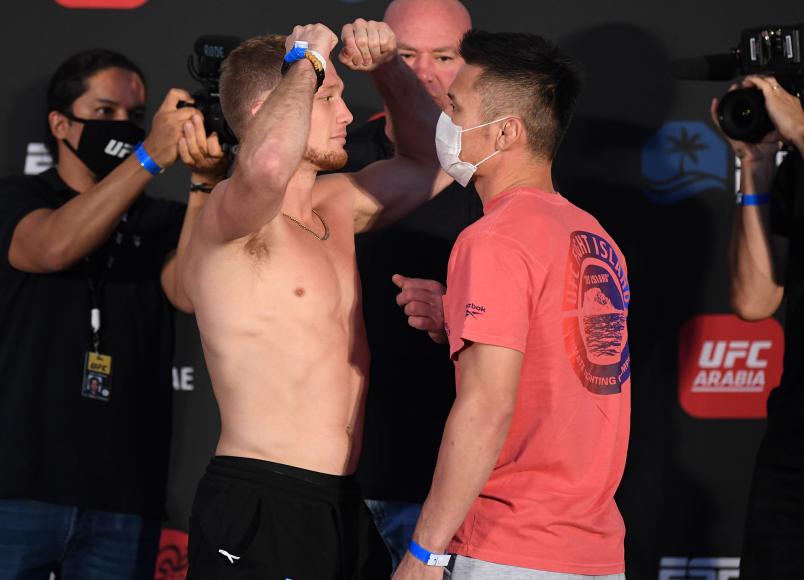 Hey, whatever makes you happy, and there may have been no one happier in Las Vegas on May 30 than the Arizona product, who bounced back from a February loss to Merab Dvalishvili with a first-round submission win over Louis Smolka that put his Octagon slate at 3-1.

“I was happy as can be,” he said. “Not only the short notice fight, but getting someone who was gonna bring the fight to me and throw down. I got exactly what I asked for, and when I get that, it's gonna be a short night for them or, if they survive, it's gonna be a Fight of the Night type of thing and I was able to get the job done, put him away and get my first finish in the UFC. I've had a few decisions, but I'm definitely always trying to finish fights and I finally got it done in the UFC in the first round. I couldn't be happier, and I want to keep rolling with the momentum.”

He gets his chance this weekend, but while opponents like Borg, Smolka, Dvalishvili and Manny Bermudez had a bit (or a lot) of name recognition with fight fans, that’s not the case with China’s AlatengHeili, who is 2-0 in the UFC and the definition of a high risk fight. Kenney isn’t concerned with his opponent’s Twitter follower count, though. He knows he’s in a tough fight and he’s just looking for a win.

“I'm in a position now where I'll fight anybody,” he said. “I just need to keep getting wins, keep putting on good performances and getting finishes. Alateng is no slouch. He's 2-0 in the UFC, he's tough, he's gonna bring it, and I really don't care who they put in front of me. Maybe when I get a couple more wins, I’ll start calling out some ranked guys and start working my way up that ladder again. But right now, I just want to keep fighting and putting money in my pocket and working my way back into those rankings.”

He’ll get there. The talent is obvious, as is the desire. More importantly, though, Kenney’s success may derive from the fact that whether he’s in the gym or the Octagon, he really likes this stuff.

“This sport, sometimes I wouldn't wish it on my worst enemy (Laughs), but this is what I feel like I was born and bred to do and I am happy,” Kenney said. “When I first had a dream of being a UFC fighter, it was almost guaranteed that you had to have another job to be a fighter. So when I first got into fighting, it wasn't always about the money and everything; it was about proving myself, being the champion and competing. That's what I'm truly happy doing, competing and trying to be the best in the world. I've done it most of my life and I am happy doing it. Obviously, you're gonna have your rough patches, you're gonna have your times where you're not happy with everything, but you just gotta roll with the punches and keep going. And on the flipside, now I am in a position where you can change your life financially too as long as you do the right things and keep going. And that's what I'm looking to do.”

So fighting every month then? At least until he gets married?

“I'll probably pick up a hobby down the road, but right now I'm living my hobby, so let's keep fighting.”