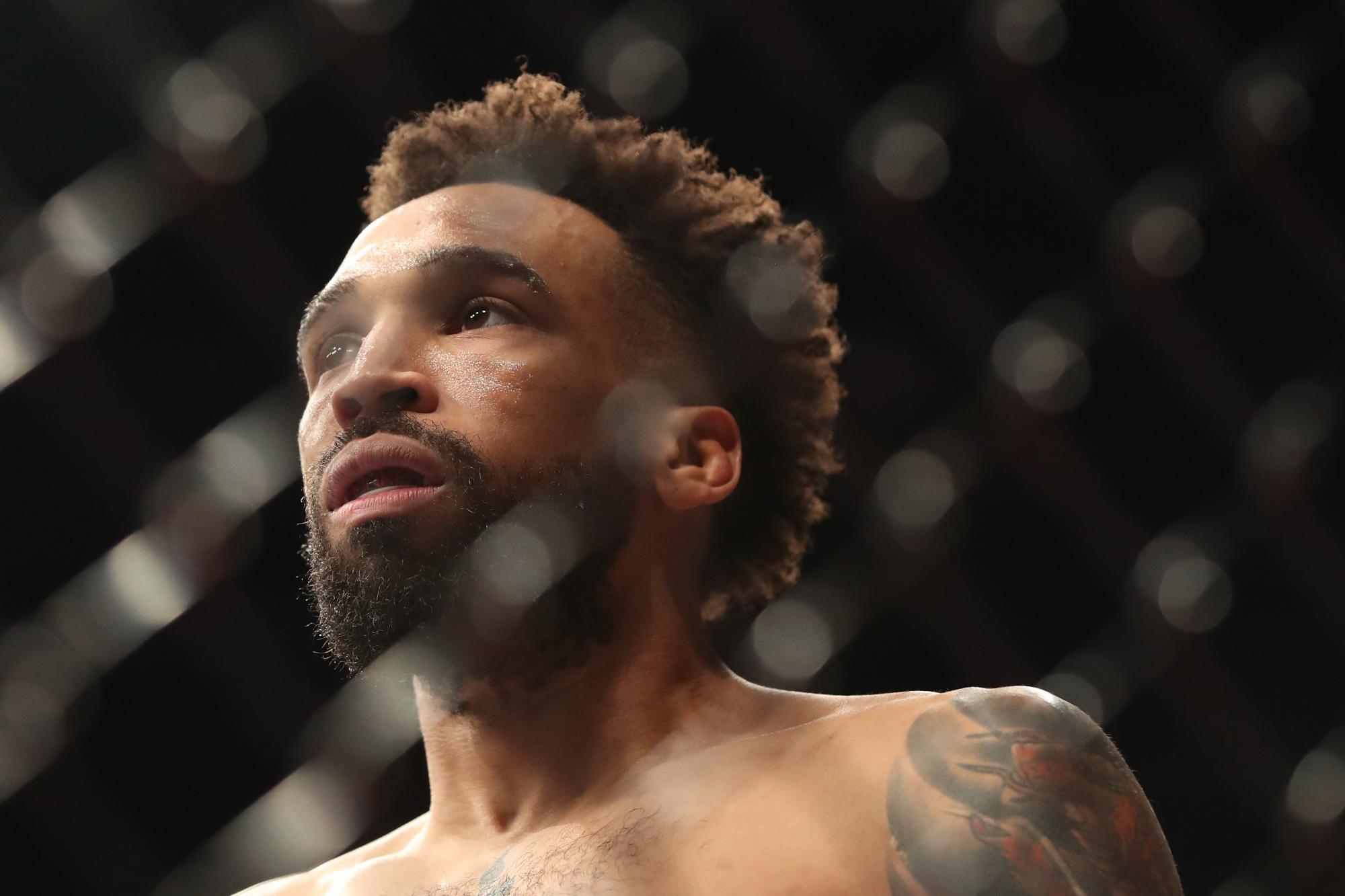 Ewell's Goal Is To Become The People's Champ

What can you do in a day? It’s the question Andre Ewell asks not only of himself, but of the world.

For the bantamweight prospect, who returns to the Octagon this Saturday to face Brazil’s Anderson dos Santos, the answer is something he’s been working on in the six months since his last appearance, a submission loss to Nathaniel Wood at UFC 232 in December.

The defeat, his first since 2017, snapped a five-fight winning streak that included an upset victory over former world champion Renan Barao in his UFC debut last September. After beating Barao, the world was Ewell’s for the taking.

Or so he thought. In reality, juggling life as a prizefighter with a grueling custody battle for his son Eli was taking more of a toll than the Ewell realized.

“At first, I thought I was able to handle it and I was doing so well,” he said. And while he offers no excuses for his loss to Wood, he does realize that he may not have been at his best that night in Inglewood.

“I’m not going for excuses because I honestly hate it,” he said. “It ended up showing that I’m a hundred percent human and things are able to get to me. So in those situations, you’ve got to end up figuring it out and making it where it favors you. That last fight, it wasn’t me at all. Hopefully my next fight, everybody will accept my apologies with my fists. I’m not stopping, I’m still fighting.”

That goes for his career inside the Octagon and the fight for Eli outside it. But with six months to wait between fights, the 31-year-old has been finding his balance.

Keeping things positive has been the fight before the fight for Ewell, but he’s winning that one. Now he just needs to win when the Octagon door shuts.

“I’ve had a lot of time to focus on me, and I ended up understanding that for me to provide something magical for my son, I gotta do this,” he said. “I gotta continue to better myself and continue to keep on pushing forward to get better and let the world see and show the value. And then when it all comes down, he’ll understand that I did it for him. That’s what’s keeping me motivated and pushing forward – kicking out the negative and only focusing on the positive.” 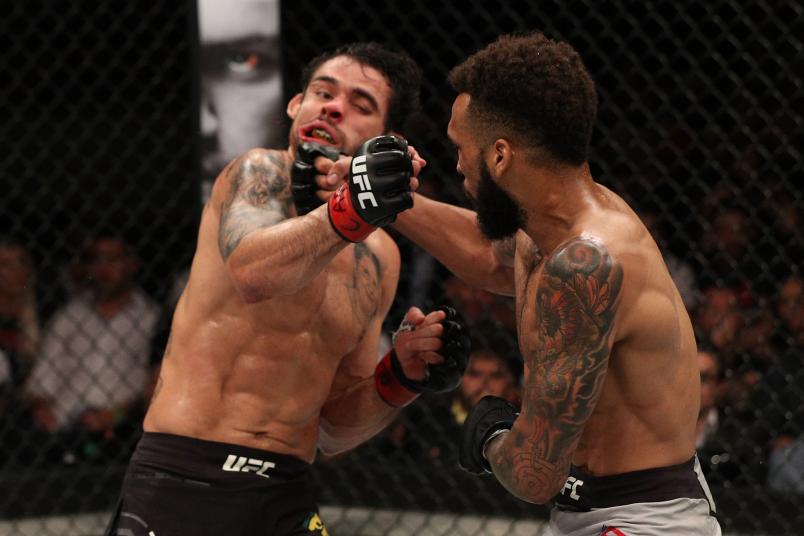 That positive begins with the foundation he’s planning on establishing in which he says, “I’m able to grab people that don’t have chances or end up getting their chances taken away.” Then it moves on to fight night in South Carolina, a night he can’t wait for.

“I’m beyond itchy,” he laughs. “As much as I’ve been itching to fight, you might as well say I’ve got hives. I’m totally excited to be on a good card with the Korean Zombie (headliner Chan Sung Jung), so it’s even more of a bonus.”

With a nickname like “Mr. Highlight,” it’s not surprising that Ewell can appreciate what a human highlight reel like Jung brings to the table, but the Californian wouldn’t mind stealing the show this weekend.

“I’m actually able to get an extra chance to show my value to the world,” he said. “I’m aiming to be the people’s champ, and for me to be the people’s champ, you gotta go out there and perform in front of the people. We’re in a sport where if you don’t perform well or you have a bad day, they can actually get rid of you. But I know where I’m meant to be and I know where I’m going to be.” 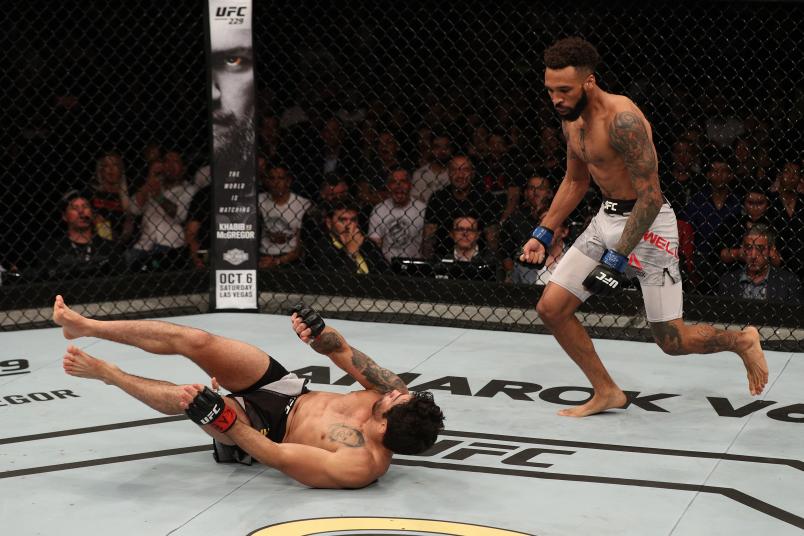 SAO PAULO, BRAZIL - SEPTEMBER 22: (L-R) Renan Barao of Brazil gets knocked down by Andre Ewell in their bantamweight bout during the UFC Fight Night event at Ibirapuera Gymnasium on September 22, 2018 in Sao Paulo, Brazil. (Photo by Buda Mendes/Zuffa LLC/

And he knows people are watching. Not just his son, friends and family, but also fans who have sent him messages of support after hearing his story, letting him know that they’re in his corner.

“I love things like that,” said Ewell, ready to take on the world, starting with Anderson dos Santos.

“It’s not a bad situation for me. I know that when I perform, I’m great. No one can beat that. I’m bringing excitement to the table and I already know the outcome is gonna be in my favor. It’s a must-win thing, but all I’m thinking about is performing and doing what I have to do.”

So what can Andre Ewell do in a day? He’s got some ideas, but he’ll start by keeping it simple.

“You have 24 hours to do something, to make something positive,” he said. “Every positive outcome that comes into your life, you’re able to change something in the future, and you aim for the next day to be better than the last.”

Not a bad plan at all.