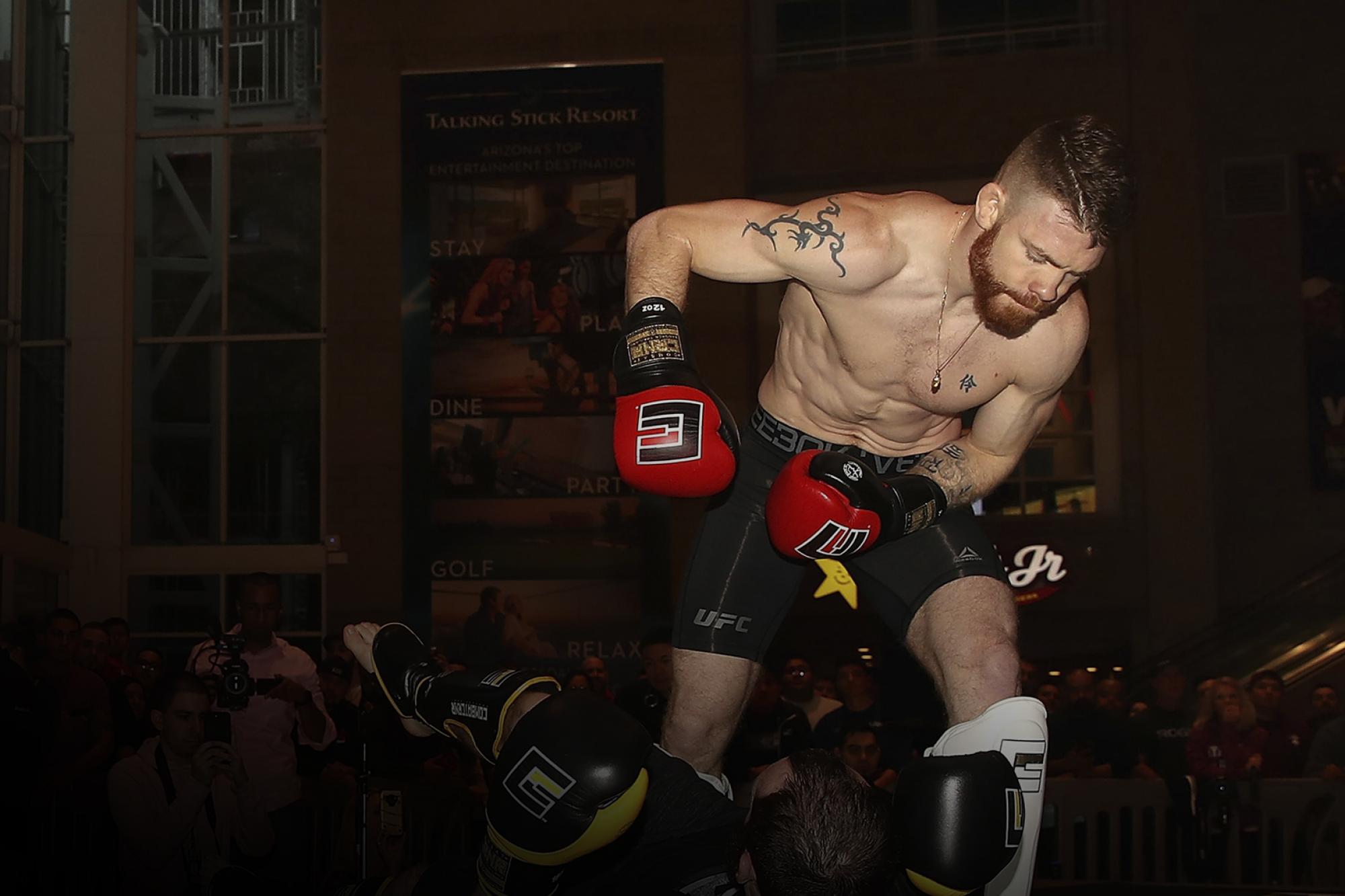 Felder Is Fired Up For UFC Phoenix

After Spending Time Recovering From Injury, Paul Felder Is Excited To Get Back In The Octagon Against James Vick
By Zac Pacleb • Feb. 15, 2019

Even though Paul Felder wasn’t fighting, he was staying busy inside the Octagon.

As a color analyst during UFC fight nights, Felder developed into a well-liked analyst, something he credited to his time studying acting in school. Other than that ease in front of camera, he also tries to keep things straight forward.

“I feel like I just have fun with these guys, and I call what I see,” Felder said. “I’ve been fighting for a long time, doing martial arts for most of my life, so sitting back and being a fan and watching fights is fun for me. I get to be on the road with a company I love working for and people that I love dearly and appreciate what they do on a daily basis, so it was an opportunity that I’m super grateful to be a part of.”

However, after losing to Mike Perry at UFC 226, his lone bout of the year, Felder was starting to get the itch to fight. Cancelled bouts and an arm injury that required surgery kept Felder away from another bout last year, and his 2018 turned out to be the complete opposite of his 2017 campaign that consisted of three knockout wins.

Felder has the chance to start his year off with a bang in the co-main event against James Vick, who is also coming off a loss.

We talked to Felder about his his up-and-down 2018, how he found success in the broadcast booth and what he’s most looking forward to about his fight. 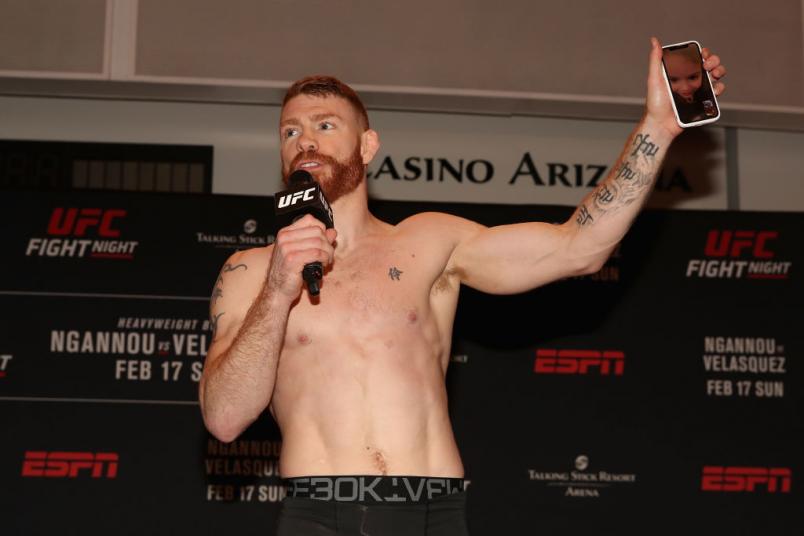 UFC: You kind of had a weird 2018. Injuries, stops and starts, but now you’re in a new year, fighting in February, how does it feel to be getting back into the swing of things?

PF: I think the timing is great that it’s only February. Hopefully, with no injuries, I can kind of plan out my 2019, and get a couple fights, three fights if there’s no serious problems and get back into kind of fighting, doing a couple of commentary gigs, fighting, but it’s a fresh start. A brand new year. It’s early in the year, so I have options. I can fight multiple times if I want to, so it’s good.

PF: I got remotivated. It got pushed back. I was supposed to fight in January, and I think ultimately, the timing is the best it could be. I’m coming off a surgery on my arm to repair that break, and it just gave me more and more time to really get comfortable. I don’t even think about that injury at all. It doesn’t even cross my mind when I’m training whatsoever, so the extension only helped me out, and it’s more time I’ve been away from my family, more time I’ve been dieting and that’s something I’ve really focused on this camp is getting the weight down to a reasonable area because a lot of people were seeing how big I can get in the offseason, but they’re not really taking into consideration that I’m coming off a surgery. Obviously, I gained a little weight. I fought at welterweight before that, so I feel healthy back down to 155, will make weight no problem, and I am ready to put on a show. I can’t sit here and tell you what the outcome is going to be, all I can tell you is it will be a typical Paul Felder fight where I’m going in there to mess my opponent up from bell to bell if it has to go the distance.

UFC:  What do you want to show people that they might’ve forgotten about you?

PF: I just want to show my well-roundedness in there. I’ve been working heavily on everything whether it’s wrestling, grappling. Obviously, me and Duke are always trying to up the Muay Thai skills, the elbows from every which angle, and I think I can really show that, that I’m not just a kickboxer out there, that no matter where this fight goes, I’m prepared and can finish it from anywhere as well, so I’m excited to do that.

UFC: Your opponent is a big, long physical specimen, so how do you prepare for him?

PF: There’s always a little bit of gameplan. I did some film study. Obviously, I watched some of his fights, I texted a couple of my teammates right away on points I noticed right away. I don’t have to think it, I don’t have to have him living in my head all the time. I’m going to see him. We’re going to fight each other. I know I’m going to see him a few times this weekend alone, so I don’t dwell on it. I look at it, I study it, I find the things I need to work on at that point, I let my coaches know what I think, they do more of the studying, and overthinking and analyzing, so when I go to do padwork or I go to grapple, my coaches are coming at me with those problems, with those situations they think I can get stuck in, potentially be an issue on fight night, and that’s how we go from there. And I have teammates, I got guys back in the camp that are well over six feet. Most of them are welterweights or middleweights or even heavier, so I’ve been moving around a lot of weight this training camp, and I don’t mean going to the gym and doing bench press. I mean physically with my training partners, so I’m used to much bigger, heavier guys right now to grapple with.

UFC: Did you expect to be as well-received as you are in the broadcast booth?

PF: I went to the university of arts, I studied acting in college, I worked professionally in the theater business a little bit, so being on camera, being able to talk in front of people, I didn’t’ think that was going to be an issue, but you never know how it’s going to be received. You never know what people are going to think about how you break down a fight versus how Dominick Cruz or Joe Rogan is going to break down a fight. You also don’t know how you’re going to gel with those guys, so that was the nerve-wracking part for me really was how am I going to get along with all these guys? Is it all going to go well or am I just going to be in and out of there real quick.

UFC: Sometimes broadcasting can put you in a tricky situation, but you’ve handled everything smoothly. What do you think it is about your personality type that just translates so well in the Octagon when you’re interviewing fighters, in the booth when you’re talking about fights?

PF: I try to keep it real, and I just try to be your everyday guy that is a fight fan talking about these things, and that’s what I am, but at the same time, I’m also somebody that is a veteran of this sport and has been in there. I’ve taken my licks. I’ve had my downside. I’ve had upsides. I’ve seen it all pretty much without being champion or the top five of this sport. I’ve fought some of the best guys out there, I’ve beaten some of the best guys and I’ve lost to the best. I don’t care if I got to talk about a highlight where Mike Perry is punching me in the face. He punched me in the face. That did happen. That was real. I can live with that. It was a tough fight, and I have no problem calling his fight and being like, ‘This is what he did well against me.’ I would do the same thing for Edson Barboza and whoever else beat me. It doesn’t affect me. I’m a martial artist. I’ve had losses. I’ve had setbacks in my life. And I feel like people appreciate that, that it’s just like, whatever, I like to crack jokes when I’m out there and try to make it lighthearted and fun for people that are watching it. This sport is tough to wrap your head around. There’s a lot going on, so if they can hear it from somebody from Philadelphia, from that area who’s just a regular guy who happens to be put in the spotlight. 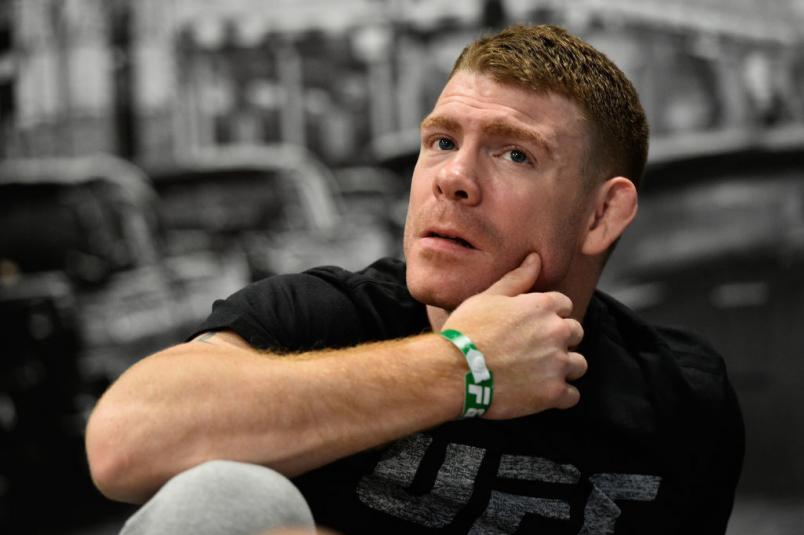 UFC: As you did more and more broadcasting while you were injured, were you starting to get a little itchy while seeing other fighters have success?

PF: That I was. When you watch all these guys that are kind of taking over where you have left the scene for a little bit and getting all this attention, I get a little jealous of calling some of the lightweight fights where I see these guys start to put winning streaks together, get big finishes, and I’m just like, ‘Man, I was just doing that in 2017 when I had three fights in a row that were all elbow knockouts.’ And things happen. At least I had that. It could be worse off and be a fighter that only has fighting right now. It doesn’t distract me as much as people say. Like, ‘Oh, he’s not focused on fighting.’ What are you talking about? That’s all I’m literally doing, is studying, watching and watching these guys in my division breaking down every single thing that they do, including James Vick. I called his fight against Justin Gaethje, I watched all his film. I had to give keys to victory in how he was going to beat that guy, so it’s just helping me. It’s keeping me in the game without actually having to be in the Octagon.

UFC: Lastly, when you finally make the walk to the Octagon, what are you going to be expecting or looking for internally?

PF: I can’t wait to feel that canvas under my feet. As soon as I touch that roughness and I smell the way that Octagon smells and the crowd, whether they’re booing me (or) cheering me, just looking back at my coaches like, ‘What the f*** am I doing?’ Or ‘Why are we doing this?’ And then it’s soon as that bell rings and Bruce Buffer announces, that’s the moment that I live for. It’s so stressful, it’s so nerve-wracking, it’s so terrifying, and I love every freaking second of it, and back when I fought Derek Cruickshank and I was on some losses before, I remember telling myself, ‘Take in every moment of this. Doesn’t matter what the outcome is going to be. Just enjoy this. This stuff is crazy.’ And as far as the walkout, I’m excited for the walkout. I’ve talked about my daughter a lot. I’ve talked about my father who passed away from pancreatic cancer. This one is for my mom. She’s the person that made me as tough as I am. She’s the one that put the grit in me. A lot of people would think it’d be my father, but it’s actually my mom, who is tough as s***. I mean, she’s the nicest human being you’ll ever meet, which is what I try to be. I try to be as nice to people as humanly possible, but when you cross me, I’m going to kick the s*** out of you.