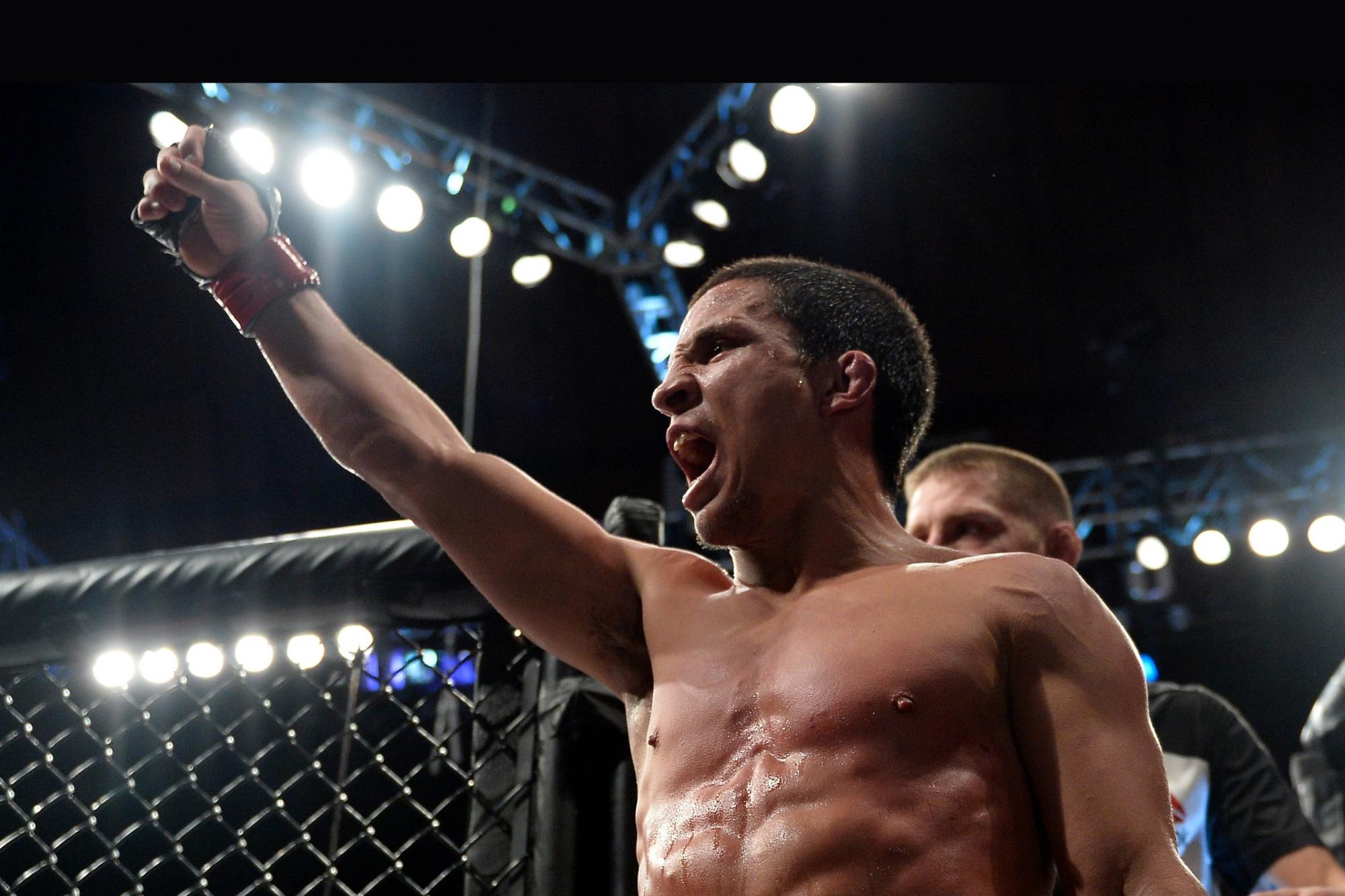 With The Flyweight Belt Cleary In Sight, Benavidez Reflects On His Momentous Journey
By E. Spencer Kyte, on Twitter @SpencerKyte • Feb. 28, 2020

Joseph Benavidez was one of the four men who officially ushered in the UFC flyweight division nearly eight years ago in Sydney, Australia.

At the time, many saw the creation of the 125-pound weight class as an opportunity for the then Team Alpha Male-based standout to finally capture championship gold and escape “The Franklin Zone,” a fictional state of purgatory named after former middleweight champ Rich Franklin and inhabited by elite contenders who had previously lost to the current champion in their division on two occasions.

Less than two years later, Benavidez had become “The Mayor of The Franklin Zone,” adding twin losses to Demetrious Johnson in flyweight championship bouts to his tandem setbacks opposite Dominick Cruz at bantamweight.

New division, same situation, but through it all, the talented fighter from Las Cruces, New Mexico never stopped working.

He accepted every fight that was offered to him, knowing it would take a number of victories and a couple lucky breaks in order for him to work his way back into another flyweight title fight.

Since that second loss to Johnson, Benavidez has gone 9-1, posting twin victories over Dustin Ortiz and Jussier Formiga, along with wins over former title challengers Tim Elliott, John Moraga, and Ali Bagautinov, with his lone setback coming against Sergio Pettis in his first fight back following an 18-month layoff after undergoing knee surgery to repair a torn ACL.

After each fight, Benavidez, now 35 and based in Las Vegas, simply continued to go about his business, content to keep posting victories and solidifying his standing as one of the best fighters in the world competing south of the 155-pound weight limit.

Now, nearly eight years removed from the night the division debuted and more than six years clear of his second championship defeat to “Mighty Mouse,” the last of the original flyweights gets another opportunity to claim the title many saw him winning years ago, as he steps into the cage to face Deiveson Figueiredo in the main event of the UFC’s return to Norfolk, Virginia on Saturday night.

“Eight years since the first title fight; that’s pretty cool,” said Benavidez, who rides a three-fight winning streak into this weekend’s championship headliner. “I’ve been blessed. You never want to be a flash in the pan and there have been so many talented guys come in and out; you always want to achieve longevity.

“I’m not the best at patting myself on the back or taking compliments, but to look back (at the history of the division), I’m pretty proud because I’ve been doing it right, with no shortcuts, the same enthusiasm. I’ve never stopped. I’ve always tried to stay consistent and believe.

“In any division, there are guys who were perennial contenders and now the division has totally changed, but our division is so new that we’ve only been able to have one of those rotations or orbits of contenders coming in and out,” continued Benavidez, who has as many UFC appearances (18) as his opponent Figueiredo has professional fights. “We’re on our first rotation, so it’s exciting.

I think the contenders right now are just as exciting as the contenders you knew before,” he added. “I also like that I can look back and I was in the first batch and I’m still here, I’m going for another title fight. It’s inspiring and motivating.”

As much as he’s familiar with fighting for UFC gold, Benavidez is quick to point out that things are dramatically different today than they were for either of his two prior attempts to claim the flyweight title.

Watch Benavidez Fight For The Flyweight Title With Your ESPN+ Subscription

The first time around when he and Johnson dueled in Toronto to determine whose name would be etched in the history books as the inaugural UFC flyweight champion, Benavidez built the fight up into a “life or death” affair in his head. He was the guy who was “supposed” to win and only through victory would he garner the respect, admiration, and validation he was seeking from his contemporaries and those who cover the sport.

When he lost and his world didn’t come crashing down, Benavidez resigned himself to never letting a fight consume him in that way ever again, and entered his second meeting with Johnson in great spirits, fresh out of a tremendous camp, and backed by a partisan crowd in his adopted hometown of Sacramento.

Just a couple ticks after the two-minute mark of the opening round, he got knocked out. Six years later, he enters his third flyweight championship fight with a much different mindset and matured vision than in his two previous attempts to capture UFC gold.

“This one feels different from both, honestly, and that’s something that only comes with time and experience,” began Benavidez. “For one, it’s not an obsession; it’s not something I feel I need. I’m super-grateful for (the opportunity) and I’m definitely not going to squander it, but I don’t care about the attachment added to it. It’s just another fight.

“This is for the love of it — for the glory and the moment,” he added. “It’s for the feelings that I’m going to feel with other people. The vision in my head of winning the belt was always me getting my hand raised with the gold belt around my waist, everybody cheering for me, but now that’s just a formality of the vision.

“Now the visions are about smiling with my wife, hugging my wife, enjoying the quiet moments after with her and with coaches and supporters.”

While Saturday’s contest doesn’t carry any of the “do or die” personal stakes Benavidez assigned to his first UFC title fight, there is a lot on the line from a professional standpoint for the 35-year-old this weekend against Figueiredo.

“Professionally, this is what you set out to do,” he explained, shifting gears and making it clear he understands that the outcome of Saturday’s bout at Chartway Arena will play a big part in determining his legacy. “There is obviously a huge personal component, and that is so important as well, but at the end of the day, there is a Wikipedia page and a list of accolades and being UFC champion is what is missing.

“People are always going to say I was a good fighter, no matter what, but this pretty much solidifies that I am the best. It puts that line on Wikipedia that I was a world champion.

“This is what I’ve worked so long to do, dedicated all my time to, so, of course, I want to win a world title,” he added. “From a competitive standpoint, this is as big as it gets and my professional career is not complete without it.”

But where the actual belt itself and everything he believed would come with it were his focus the first time around, the older, wiser Benavidez who will walk out to the Octagon on Saturday night is now chasing a feeling and a moment, one that even the articulate flyweight standout can’t quite put into words.

“The moments and the feelings are what it’s all about,” he said. “You can imagine them and you look forward to them but, for me, I can’t put it into words. I know it’s going to be glorious and I know how great winning feels any time you can get a win in the UFC, but this is going to feel that much better because of everything behind it and everything that has gone into it.

“So much of that moment and how I’m going to feel is about the people who have helped get me there. It’s hard to put into words, but I try to feel those emotions every day and envision it every day because that’s the thing I’m after — that feeling, that moment, that memory, not a belt that is going to sit on my mantle.”

Eight years after being projected to rule the division and six years removed from a second straight championship loss, Joseph Benavidez is finally at a place where he’s ready to sit upon the flyweight throne.