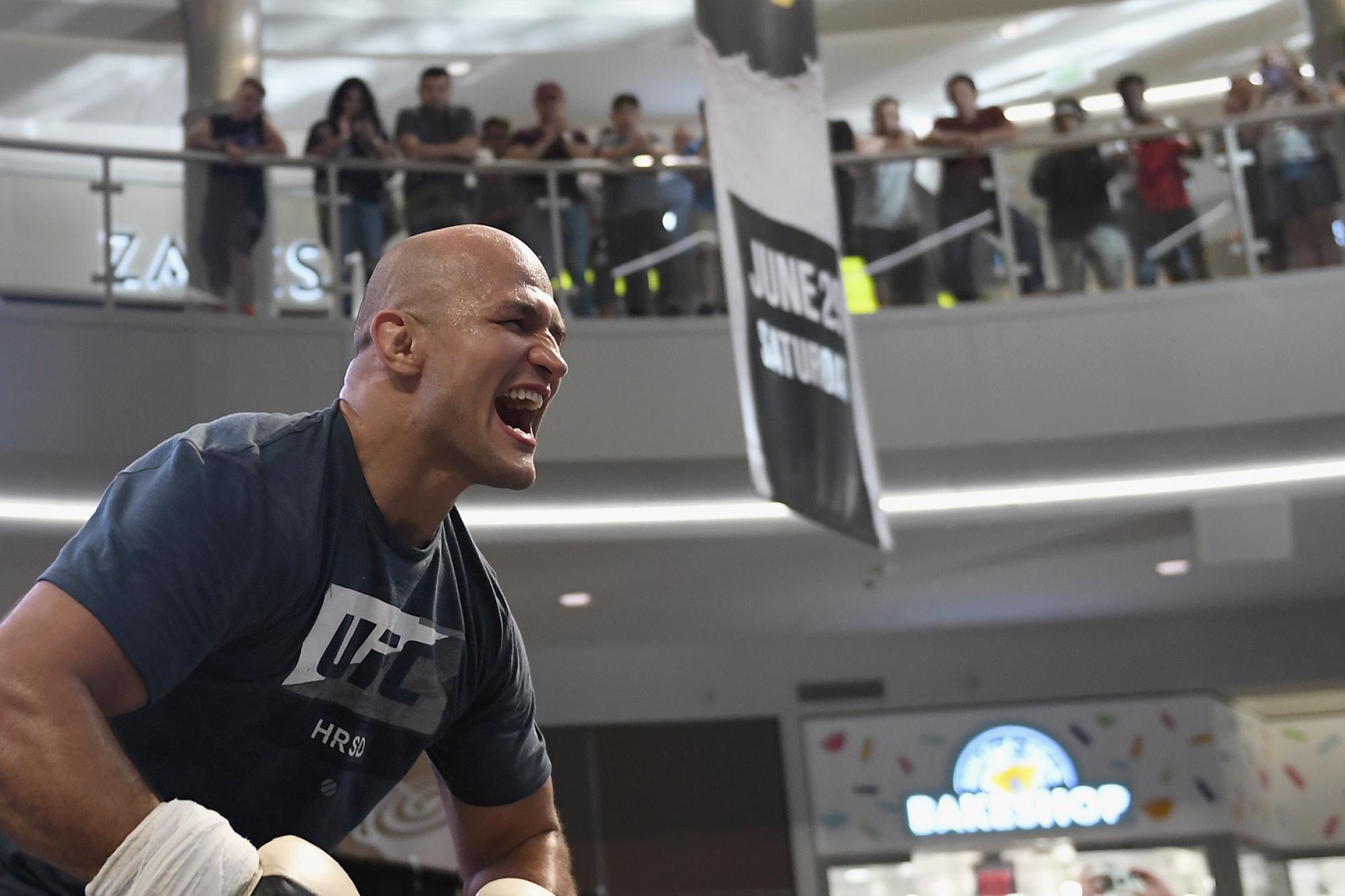 Dos Santos Plans To Fight Fire With Fire Once He Meets Ngannou At UFC Minneapolis
By E. Spencer Kyte • Jun. 27, 2019

Over his first four years on the UFC roster, there wasn’t better heavyweight in the sport than Junior Dos Santos.

Beginning with his shocking upset win over Fabricio Werdum at UFC 90 and running through his successful title defense against Frank Mir at UFC 146, the affable Brazilian rattled off nine straight victories, capturing the heavyweight title from Cain Velasquez in the historic first UFC fight broadcast on FOX and adding wins over some of the most noteworthy competitors of the era.

With fast hands, crisp technique and punishing power, Dos Santos seemed poised to lord over the division long term, but holding onto the heavyweight title has always proven difficult and soon “Cigano” would drop the belt and enter into an extended period dotted by inconsistent results and extended stretches of inactivity.

After a four-year run of dominance to begin his UFC tenure, Dos Santos spent his next five years alternating wins and losses, beginning with his victory over Mir and culminating with his failed bid to wrestle the title away from Stipe Miocic at UFC 211 in Dallas, Texas.

That loss was followed by more than a year on the sidelines after Dos Santos was one of several Brazilian fighters to initially be flagged for a potential anti-doping violation before having an investigation determine the positive test was a result of a contaminated supplement.

When he finally returned to action last summer against promotional newcomer Blagoy Ivanov, the former champion stood as a giant question mark in the division, with many people wondering if he could break the cycle of alternating wins and losses to become a serious title threat once again or was destined to be an established name on the fringes of contention for the remainder of his career.

“This is a very hard sport — it takes a lot to be a very good fighter and to keep winning all the time and sometimes you have negative results,” said Dos Santos, reflecting on his career journey as he readies to face Francis Ngannou in the main event of this weekend’s return to Minneapolis. “But those negative results will help you learn a lot if you understand that and recognize that you have to learn from those things.

“I’ve gone through some very hard times, but I don’t really care about it any more — it’s in the past already and I learned a lot from it.

“Right now, I’m ready to win the belt again,” continued the heavyweight contender, who enters this weekend’s event on a three-fight winning streak that includes back-to-back stoppage victories over Tai Tuivasa and Derrick Lewis. “I’m working hard to reach this big goal of my life — to become champion again — and I really believe it’s going to happen.”

While nothing is set in stone, this weekend’s headlining heavyweight clash certainly shapes up like a potential title eliminator.

Just as Dos Santos used the second half of last year and his first appearance of 2019 to put himself back in the championship mix, Ngannou rebounded from consecutive losses over the first seven months of 2018 with a pair of blistering finishes to re-establish himself as a menacing force in the heavyweight ranks.

With both men rolling and having collectively beaten the remaining contenders stationed behind them in the rankings, Dos Santos is confident that a victory on Saturday will deliver him into a championship fight later this year.

“Every next fight that we have is the most important fight of our careers and that’s how I’m taking this fight — it’s the most important fight of my career and I’m very well prepared for this,” he said of the pairing with Ngannou. “It means a lot to me because it will be one step closer to the main goal of becoming champion again, showing to myself and proving to myself that I wasn’t wrong and everything I went through was worth it.

Normally all laughter and positive energy, some of his opponent’s comments in the build up to this weekend’s event at Target Center have rubbed dos Santos the wrong way and caused him to bristle.

During a media availability at the UFC Performance Institute in Las Vegas last week, the hard-hitting Ngannou questioned the legitimacy of Dos Santos’ Brazilian jiu jitsu black belt, which he was awarded in 2012 by his long-time instructor, Yuri Carlton. 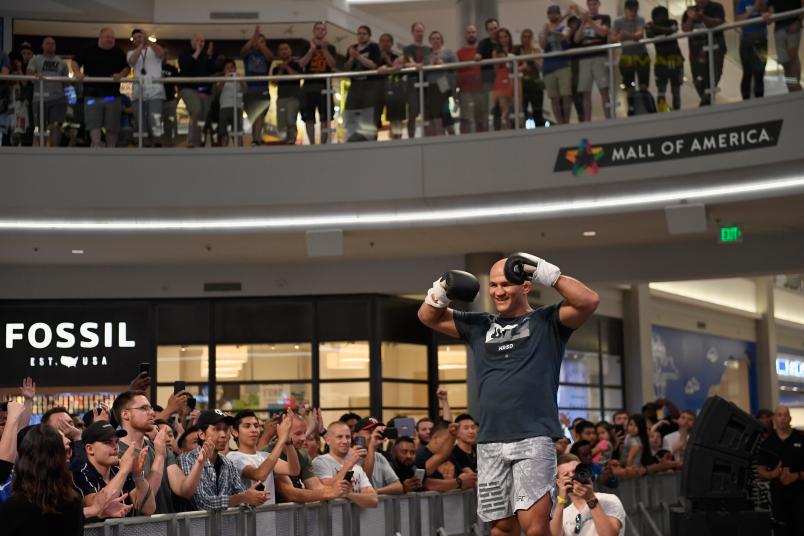 “It doesn’t really bother me, but I think it was kind of disrespectful to my coach, my mentor, Yuri Carlton,” began Dos Santos, addressing Ngannou’s comments. “It was disrespectful to say that. Saying bad things about a black belt, I think the whole jiu-jitsu community doesn’t like that.

Although he laughed as soon as he finished sounding off, the insinuation that his credentials are somehow fraudulent clearly tweaked Dos Santos and while he’s unsure of Ngannou’s motivation for making such an outlandish claim, the former champion wanted to make it clear that he’s not going to be goaded into altering his approach once the two get inside the Octagon on Saturday night.

“If they are thinking they can say something like that to avoid getting punched in the face, they’re wrong because there will be a lot of punching him in the face,” said Dos Santos. “(My first thoughts was), ‘This guy is saying s*** because he wants me to put him down and do something (on the ground),’ but it’s not going to work.

So no blast doubles to start the fight then?

“Don’t you know me?” he asked with a laugh. “I’m Junior Dos Santos, man. I never do that. I go to the stand up and bang game and it’s not going to be different against this guy.

“I know that he’s talking a lot and he really believes that he has really good boxing — he wants to fight boxing in the future — and he believes he can stand up and bang with me, but that’s his biggest mistake.

“I’m going to go punch him in the face and knock him out as I did with all the other guys.”