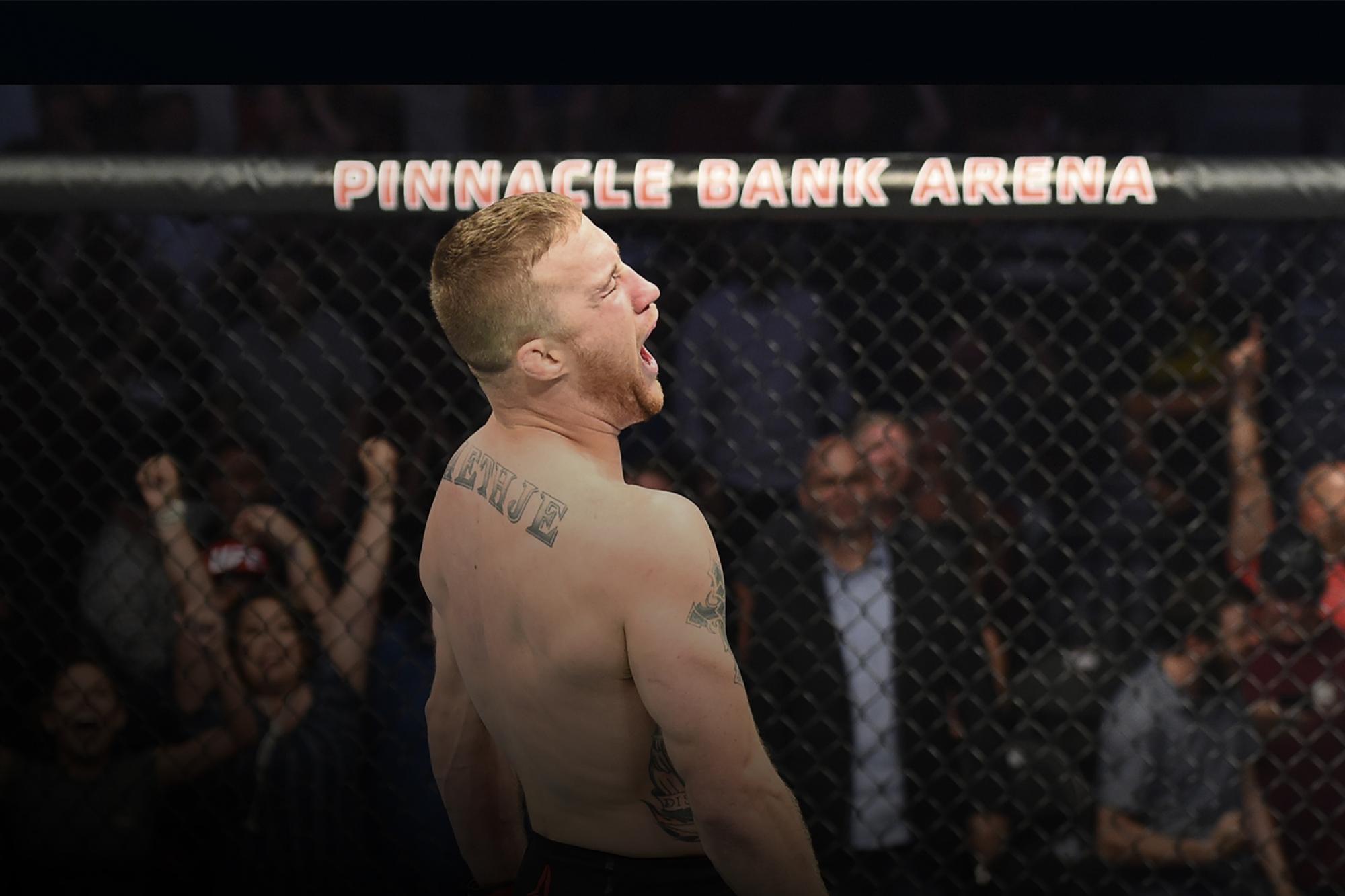 Gaethje Looking To Make It An Ugly Fight

Up and down the UFC roster, there’s a handful of fighters who always seem to bring it. Their fights are always, at the very least, entertaining.

And then there’s Justin Gaethje.

Whether he’s going airborn for a Rolling Thunder kick or taking an obscene amount of punishment just to give it right back to his opponent, “The Highlight” is as reliable as they come.

It’s part of the reason why he’s preparing to headline his fourth card in just his fifth UFC fight with the chance to launch himself up the gauntlet that is the lightweight division. In his last fight, the main event at Fight Night Lincoln, he put James Vick to sleep in the first round – a victory made even more satisfying by the trash talk the two shared leading up to the fight.

His next opponent, Edson Barboza, isn’t giving Gaethje nearly as much bulletin board material, which is less than ideal.

“I’d rather him talk s***,” Gaethje said. “I definitely would rather beat someone up that I don’t like, but hey, I’m a fan of Edson, but on Saturday night, he’s trying to take everything I’ve ever walked for, so I’m here to beat whoop his ass.”

Between Gaethje and Barboza, it wouldn’t be shocking if the only reason either fighter ended up on their back was because of a knockout blow, but that’s really where the similarities end. Barboza possesses some of the most beautiful and devastating techniques in the entire world. Gaethje, with good technique in his own right, almost always finds himself in a brawl, which has granted him three Fight of the Night bonuses in four fights.

For this fight, Gaethje is well-aware that giving Barboza distance is as good of an idea as putting his hands down.

“I got to go in there and make it ugly,” he said. “I don’t think he wants an ugly fight. He likes pretty fights, so I got to make sure that it’s not that. Definitely don’t (want to) hang out at range like (Dan) Hooker or some of those other guys. The guys that have beat him, have beat him with pressure, and I’m going to go in there and use my pressure and try to capitalize on the moments that I can.”

UFC.com talked to Gaethje about his thoughts as he gets closer to fight night, what he thinks of the matchup and if the feeling of walking to the Octagon ever gets old.

UFC: As you inch closer to your fight, what are those feelings like?

Justin Gaethje: Fight week is always something special. Each and every one brings a little bit different experiences. I’m excited to be here in Philadelphia and put on a show on Saturday.

UFC: You’re both polished and dangerous strikers. What do you think of that matchup?

JG: He’s extremely dangerous. I got to go in there, and I got to be on point. I can’t make mistakes. I can’t take breaks. I definitely can’t take breaks at range. Kinda go in there, make it an ugly fight per usual, so that won’t be a problem. For Edson to be successful and, get his kicks off, he needs space. He doesn’t like people pressuring him. I got one of the best pressure-style fighting styles in the game, so I’m going to use it.

UFC: Obviously, you want to compete against the top of this division. What do you think you have to prove in this fight, or is a win all that you need to worry about?

JG: In a month from now, only thing that matters is that I won especially when it comes to getting my next fight. Winning is very important, so I definitely am focused on that. I have to be strategic for five 5-minute rounds. That’s 25 minutes, so I cannot take breaks, I cannot make mistakes.

UFC: Another main event fight for you. Have you gotten used to that walk to the Octagon, or do you still take it all in as you head to the cage?

JG: I love it. I’ve been thinking and dreaming about it for the last 10 weeks. There’s nothing that compares to it, and it’s kind of ruined other aspects of my life because that energy is something that can’t be matched. You can tell me I won $10,000 or $20,000 on the slot machine. I’m not going to be as excited as I will walking to the cage in that arena, in Philadelphia. I know the energy is going to be out of the roof, so yeah, I’m excited for it.