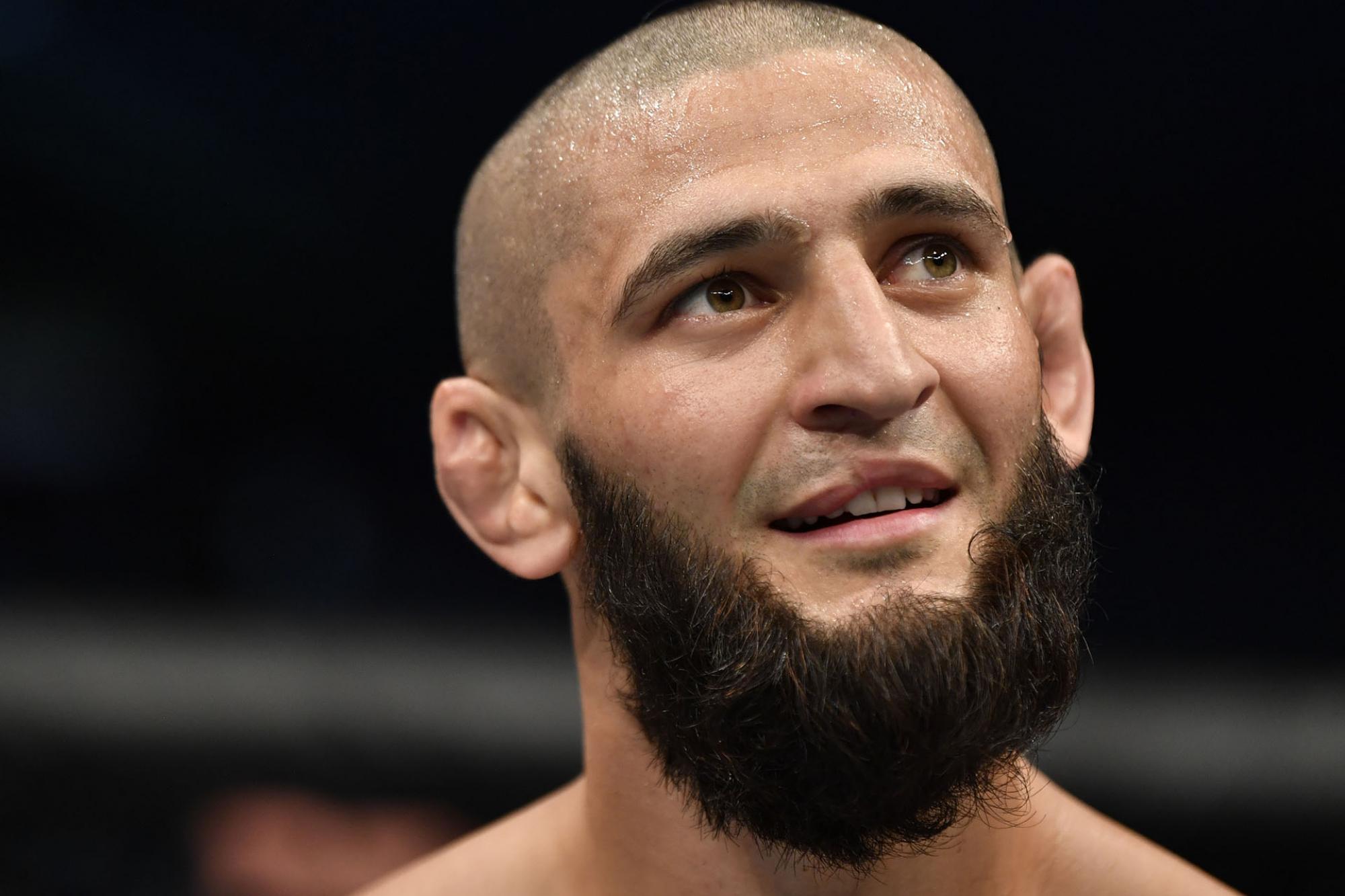 Very few people knew who Khamzat Chimaev was when the Chechen-born newcomer agreed to replace Contender Series graduate Dusko Todorovic in a short-notice matchup with John Phillips in Abu Dhabi on July 15, but it didn’t take long for the MMA community to sit up and take notice of him once the Octagon door closed.

Chimaev put Phillips on the canvas in a flash and spent the entirety of the round working over the Welsh slugger, controlling one of his wrists and riding his legs as he unloaded on Phillips with punches on the ground in a way that elicited comparisons to lightweight kingpin Khabib Nurmagomedov. Though Phillips survived the first round — and that’s the only way to describe it — it was more of the same to begin the second before Chimaev mercifully ended the bout by lacing up a D’Arce choke and securing the tap a little over a minute into the middle stanza.

In that moment, the 27-year-old became a person of interest in the middleweight division, but it was only the beginning of a breakout stay on Fight Island for the man christened “Borz” aka “The Wolf.”

During his post-fight interview, Chimaev lobbied for the opportunity to compete again as quickly as possible and the UFC obliged, inking Cage Warriors prospect Rhys McKee and stationing him opposite the intriguing new arrival in a main card showdown just 10 days later. There were no sophomore jitters for Chimaev, who followed up his defeat of Phillips with an even more lopsided mauling of McKee, finishing the promising 25-year-old from Northern Ireland in a little over three minutes without being hit once.

“It’s been crazy,” Chimaev said on Wednesday afternoon, reflecting on the whirlwind 10-day stretch in Abu Dhabi that turned him into the hottest prospect in mixed martial arts as he readies to make his stateside debut this weekend against veteran grappler Gerald Meerschaert. “I was thinking that maybe next year I was going to get a UFC fight, that I was going to be (building) slowly, slowly, but instead it’s been crazy.

While he has embraced his newfound celebrity and status as a rising star within the mixed martial arts world, Chimaev has kept things very simple in the two months since his debut, focusing on sharpening his skills, honing his craft, and continuing his push to climb the ranks in the UFC.

Though his follower counts on social media have exploded, the soft-spoken upstart has remained out of the spotlight since etching his name in the record books earlier this summer, taking a two-week holiday before returning to Sweden, where he trains alongside perennial contender Alexander Gustafsson and numerous other UFC veterans at Allstars Training Center in Stockholm.

“For two weeks I was in Barcelona, relaxing after my fights, but then I came back to start the hard work,” explained Chimaev, who has finished all eight of the opponents he’s faced to this point in his career. “Now I live close to the gym, in a hotel.

“People come to me to take pictures, which is nice; it’s nice to talk to people,” he said somewhat bashfully, clearly not yet fully adjusted to being a recognizable face on the streets of Stockholm and abroad. “Something is different now, but my hard work remains the same. I do my hard work and I’m going to fight with everybody now.” 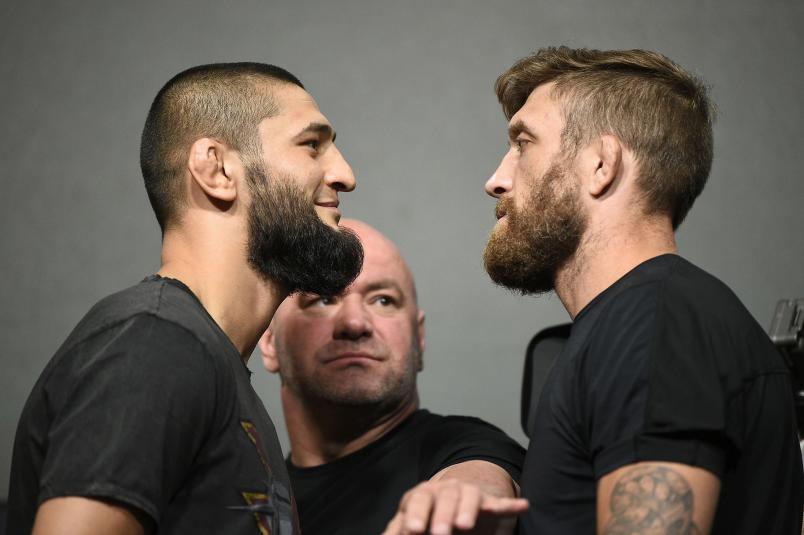 Opponents Khamzat Chimaev and Gerald Meerschaert face off during the at UFC APEX on Sept. 17, 2020 in Las Vegas, Nevada. (Photo by Chris Unger/Zuffa LLC)

Part of what has helped him maintain that singular focus on improving and readying for his next opportunity to compete inside the Octagon is that he is surrounded by a collection of older fighters who have all logged many miles in their own respective MMA journeys and are quick to pass on words of wisdom and act as mentors for the promising, undefeated neophyte.

“From Alex, it’s always motivation,” he said of Gustafsson, the gym’s most famous and accomplished fighter. “I’m close to Alex because he made history with his fights. He’s always a guy I look at as motivation.

“He’s helped me from the beginning, with money, advice, anything. Him, Reza (Madadi), Ilir (Latifi) — they helped me a lot and I want to say thanks to these guys now that I am here.

“From the day I came to Allstars, my head coach Andreas is always with me,” continued Chimaev, addressing the impact of Andreas Michael. “There are many things I get from him; every day he shows something to me. I didn’t show my striking in the UFC, but outside the UFC, I’ve shown my striking; I knocked out one guy. Because of him, my striking is much better now.

“Maybe I’m going to show this in this fight, but maybe I take him down and smash him.”

The cheeky smile that chased his thinking aloud about how things would play out between he and Meerschaert on Saturday night is part of what makes Chimaev such a compelling new addition to the UFC ranks.

He has that “It Factor,” the inexplicable mix of talent and confidence and je ne sais quoi that separates solid prospects from potential superstars, and there have been no signs that the sudden rush of attention he’s garnered since locking up “Breakthrough Fighter of the Year” honors during his magical 10-day stay on Fight Island earlier this year has gone to his head or changed his approach.

As soon as he was done smashing McKee, Chimaev lobbied for the chance to compete again at UFC 252 a month later, saying that he was ready to face anyone from the welterweight or middleweight divisions, confident that the result would be the same, even if he were facing the best each weight class had to offer.

While all fighters carry themselves with a certain level of self-confidence and a belief that on any given night, they are capable of beating anyone who steps into the cage with them, the truly elite talents discuss it and speak about it with a different kind of ease and grace.

Chimaev speaks that way, and it makes it clear that he’s not simply saying what you’re expected to say when he addresses the intense scrutiny and immense pressure that accompanies him as he readies to step into the Octagon with Meerschaert on Saturday night. 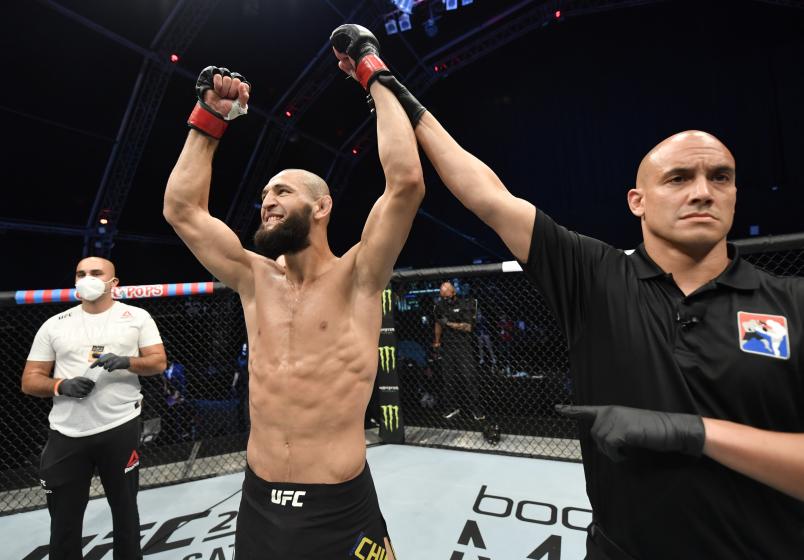 “I don’t feel pressure,” he said flatly. “I like this. I like to speak with people, talk to people. If somebody has good energy, you love these people with the good energy. If they love me, I love them back. It’s nice. Everything is nice.”

This weekend’s bout with Meerschaert is a step up in competition for the burgeoning star, as the Wisconsin middleweight has more than five times as many professional fights as Chimaev.

On top of that, the 32-year-old is a deft grappler who has 23 of his 31 career wins via submission, including five of his six victories under the UFC banner.

By any measure, Meerschaert is the most polished, professional, and accomplished opponent Chimaev has ever shared the cage with and the kind of seasoned fighter capable of halting his meteoric rise.

But as you would expect, the laser-focused standout is not the least bit worried about stepping into the Octagon with him this weekend.

“I don’t know what is going to happen on Saturday night, but I will go 100 percent to finish this guy; that’s what I know,” said Chimaev. “I give everything to finish him.”

Thus far, he’s done that every other time he’s set foot in the cage, saving his best performances for his freshman and sophomore showings inside the Octagon, so why should this weekend be any different?