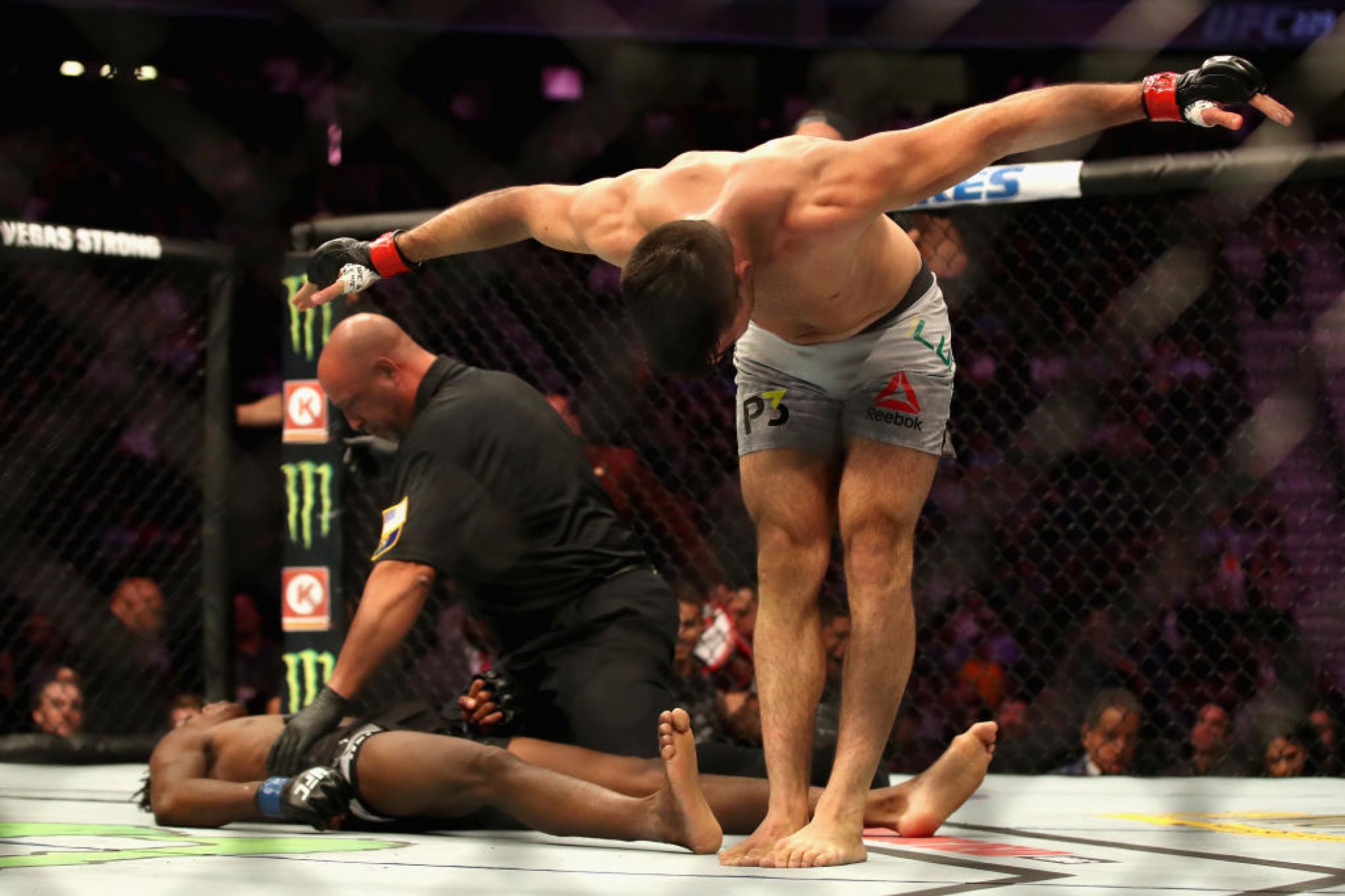 Standing inside the Octagon in mid-May, just a couple minutes removed from another first-round stoppage victory, Vicente Luque politely asked the crowd in Rochester, New York if they would be interested in seeing him headline the UFC’s summer debut in Montevideo, Uruguay.

The crowd roared in response, and though the 27-year-old Brazilian didn’t get the headlining gig this weekend, a co-main event slot against Mike Perry isn’t too bad for a young man trying to make a name for himself in a crowded welterweight division.

Of course, if he were in any way outspoken or controversial, Luque would already be a star, but because he is neither, the talented 170-pound upstart remains one of the most underrated fighters on the roster today.

His win in May over short-notice replacement Derrick Krantz was his fifth straight and ninth victory over his last 10 starts since beginning his UFC tenure with a unanimous decision loss at The Ultimate Fighter 21 Finale. Each of those nine victories have come inside the distance, including first-round finishes of Belal Muhammad, Chad Laprise and Jalin Turner, as well as a third-round stoppage win over Bryan Barberena earlier this year in a bout that is sure to land on every list of the year’s top fights come December.

The only man to get the better of him during his current scorching hot streak is surging contender Leon Edwards, who extended his own winning streak to eight two weeks ago with a unanimous decision win over Rafael Dos Anjos.

“With my fighting style, I don’t think many people want to fight me at this point,” he added, pointing out the Catch-22 many up and coming talents run into once they finally arrive on the brink of contention. “I know it’s harder to get fights because of that, so I’ve just got to keep fighting until no one can say ‘no’ anymore.”

After originally being scheduled to face Top 15 fixture Neil Magny before the Elevation Fight Team member was scratched from the pairing, Luque was hoping that pushing his winning streak to five with a fifth consecutive finish would be enough to secure him a date with a ranked opponent this time around. Instead, he’s been paired off with Perry, who in some ways stands as Luque’s polar opposite in the push towards the top of the welterweight division.

Ever since he arrived in the UFC, the charismatic Perry has been a main card fixture.

“Outside of the Top 15, this is one of the best fights I could get,” Luque said of the pairing with Perry, taking the optimistic view of things, as always. “I think Perry has a big name, he has wins over big guys that used to be in the Top 15 and every time he gets in there, he puts on a show.

“I’m the same kind of guy, so I think this fight, everyone is going to have their eyes on it, and being the co-main event, I think that’s a big plus for me and a great fight.

“I’m not the kind of guy that is going to talk my way up,” added the multilingual Brazilian. “I’m going to show what I can do inside the cage and get what I deserve because of that, so I’m going to be patient and keep doing what I’m doing.”

Over the last four years, that has largely meant making quick work of quality opposition and delivering the kind of performances that should have long ago forced people to stand up and take notice of the dynamic finisher who is equally capable of putting opponents to sleep with slick striking combinations or an extensive array of chokes on the ground.

In some ways, Luque is a victim of the natural predilection to pay greater attention to recent results and performances, rather than evaluating fighters on the totality of their efforts, as fans and observers were quick to herald Geoff Neal as a candidate for inclusion in the Top 15 after the Fortis MMA product extended his unbeaten run in the UFC to four with a second-round stoppage win at UFC 240 in Edmonton.

While Neal is certainly one to watch in the welterweight ranks and knocking on the door of the Top 15, his last two victories have come against Belal Muhammad and Niko Price, fighters Luque dispatched on either side of his loss to Edwards.

But as scribes and supporters rally to his side and climb up on their soapboxes to argue for Luque to get more attention, the mild mannered finisher remains focused on handling whatever opponent the UFC sets in front of him and continuing to deliver action-packed performances whenever he steps into the Octagon.

And that is precisely what he expects will happen this weekend when he shares the UFC cage with Perry in Uruguay.

“I’m definitely excited — maybe even more than I was for Barberena because now that I’ve been in a war, I know what it’s like and I have more experience,” he said regarding this weekend’s co-main event assignment. “I’m definitely going to get in there and make it as technical as I can — I want to get in there and be flawless — but if it gets dirty and he wants to bring the fight, we’re going to (get after it).

“I only see a knockout, a submission or a Fight of the Night. Those are the only options; I don’t see anything else.”

Provided it works out that way and he extends his winning streak to six, the surging dark horse in the 170-pound weight class wouldn’t mind getting one more fight in before the year is out in hopes of finishing 2019 with a place in the Top 10.

“The last 10 or 11 months, I’ve had four fights, so I think it’s been a good year and I can put one more in,” said Luque, who stopped Jalin Turner at UFC 228 last October before posting his first two finishes of 2019.

“My objective for this year is to break into the Top 10. This is a big fight for me where I can once again go out there and show my potential to be a top contender. I’ve got to see how I come out of this fight, but ideally, I come out healthy and I can put one more in before the end of the year.”

Maybe then people will be ready to start talking about “The Silent Assassin” as a serious threat in the welterweight division. But if they aren’t, that won’t change anything for Luque — he’ll just keep collecting finishes and stacking up victories until the only people left for him to fight are the division’s elite.