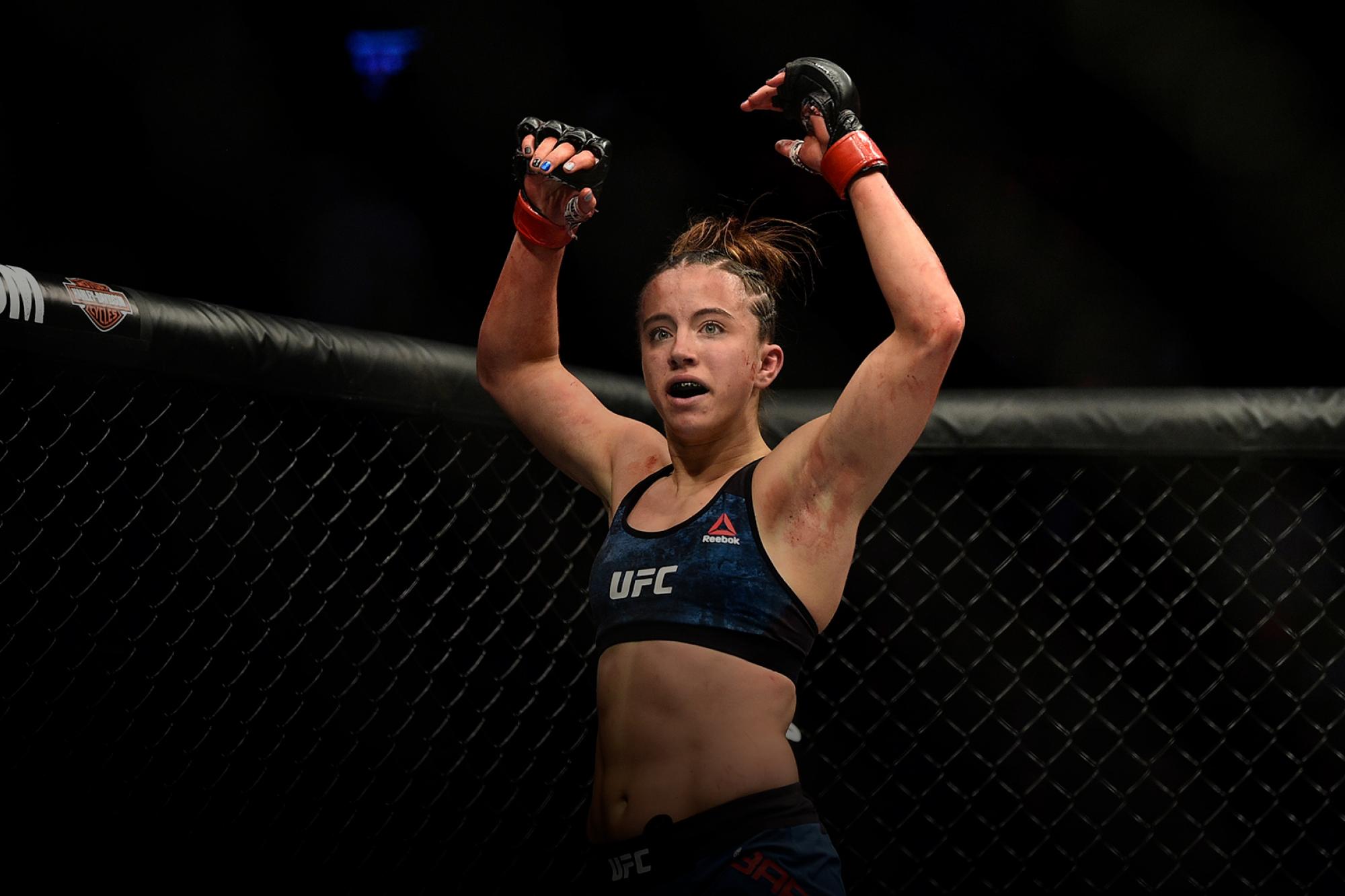 Before she takes on her first Top-10 opponent, Maycee "The Future" Barber looks back on her first UFC fight.
By Zac Pacleb, on Twitter @ZacPacleb • Jan. 15, 2020

Maycee Barber is watching herself on a laptop and wincing.

“My striking is so much better now than it is in that fight,” she said

Order UFC 246 For Any Device

The 21-year-old is watching a replay of her UFC debut, a second-round TKO over Hannah Cifers in Denver from November 2018. Since that bout, Barber picked up two more wins, two more finishes and moved up to flyweight, where she is now ranked in the top 10.

Heading into the fight, Barber held a 5-0 record and had just secured a UFC contract the previous July on Dana White’s Contender series. Making her first appearance in the promotion in her home state, Barber’s strategy was straightforward.

“I was just trying to dominate the striking and keep my range,” Barber said. “I was throwing a few reckless kicks, which we have cleaned up since.”

A big part of Barber’s development was her choice to move to Milwaukee to train full-time with Duke Roufus at Roufusport, home of former champion Anthony “Showtime” Pettis and top 5 lightweight Paul Felder, among others. She has also tabbed Ben Askren with helping her with her grappling so, for Barber, watching the fighter who entered the Octagon 14 months ago is an understandably cringeworthy experience.

“I watch past fights when I need to really talk bad about myself,” Barber said.

To Cifers’ credit, she made life difficult for Barber. The North Carolinian showed off her strength in the clinch, and when Barber landed a head kick, she flashed a smile that threw Barber off a little bit.

“I was trying to figure out when to throw and when to not because I was afraid to get clipped by her (Cifers) because she hits freaking hard,” Barber said. “But eventually I just went for it.”

Barber found some success with elbows out of the clinch in the first round, and in the second round, she started to settle into more of a groove. Getting a hold of Cifers, Barber secured a takedown and, after a bit of a scramble, Barber felt Cifers tie up her legs.

“She threatened for a leg lock,” Barber said. “I remember thinking, all right, I’m either going to sit up and tear my own knee, or I was going to stay back and she way going to get top position. I decided to sit up, and then that’s when I wanted to finish the fight because I tore my knee in that part, and I needed to finish that fight otherwise I wasn’t going to continue standing, so that sucked.”

When Barber sat up, she said she heard four pops in her knee. She would later learn that was the sound of a partial tear in her lateral collateral ligament and knew she needed to push for the finish. Alternating between elbows and punches, Barber kept the brutal pressure on Cifers until the referee stopped the fight.

Barber laments how long it took for the stoppage to come only because she has gotten to know Cifers since then. She called Cifers a “great person” and the two exchange text messages when they see one another fight. Ultimately, though, Barber got her debut win and introduced herself to the MMA world.

“It definitely wasn’t a blur,” Barber said. “I try to take everything in but, at the same time, sometimes I don’t. But yeah, it was good.”

The finish was Barber’s fifth of her career and set her on the path that led her to her upcoming matchup against the experienced Roxanne Modafferi. It’s Barber’s first top 10 opponent, and even though the fighter she was in Denver has completely evolved, it’s still a memory that holds a lot of weight for “The Future.”

“That was super bloody and definitely a finish that I’ll never forget,” Barber said.