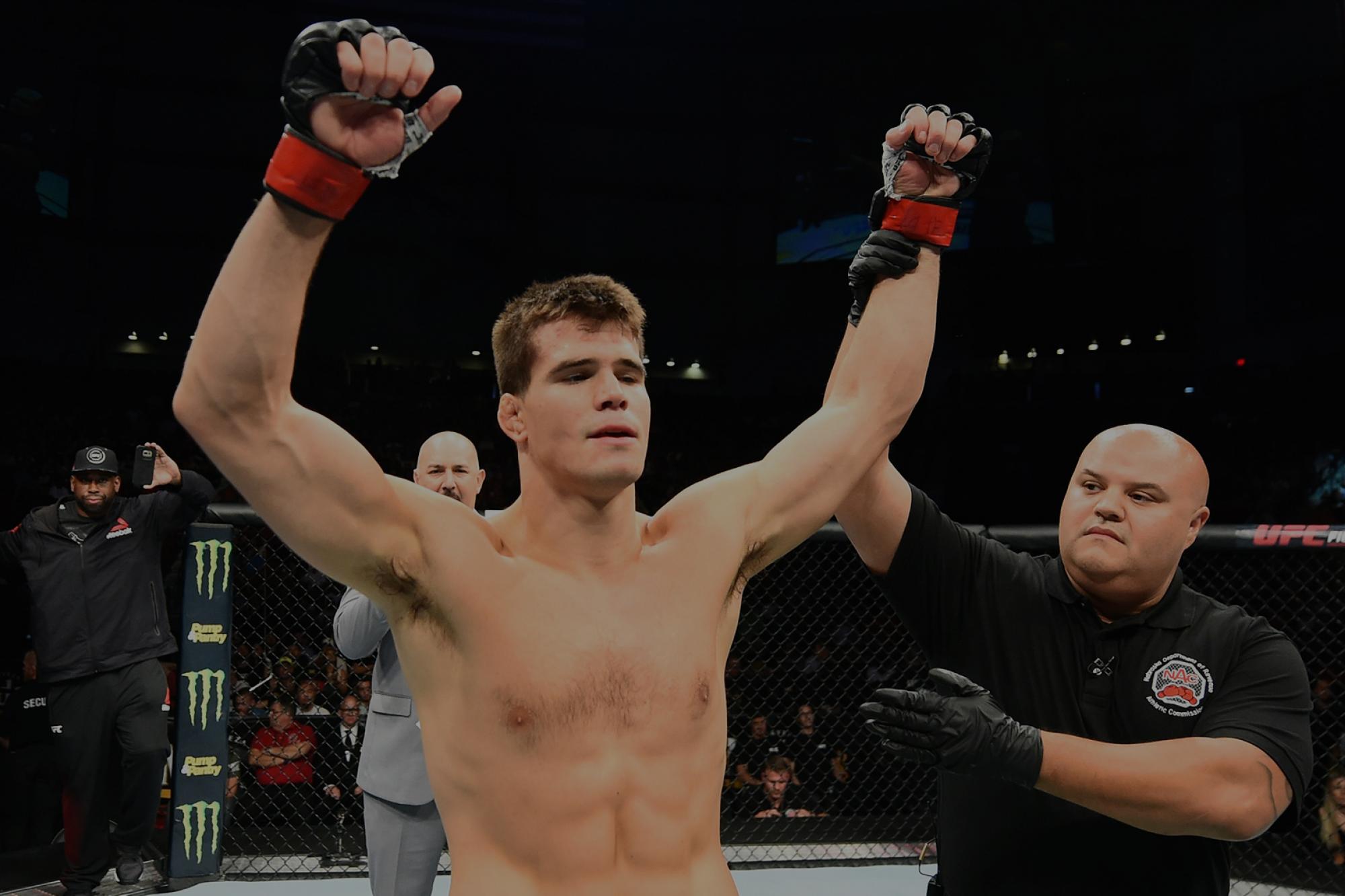 Never lacking confidence, Mickey Gall is heeding the advice of well-experienced mentors as he attempts to climb the rankings.
By Thomas Gerbasi • Feb. 28, 2019

There are mixed martial artists, there are competitors, there are fighters, and there are real fighters. Yves Edwards and Joe Schilling fit the real fighter category. In a world where many of their peers say they would fight for free, they’re the kind of guys that would actually do it.

Mickey Gall couldn’t have better mentors as he continues to learn about the world of prizefighting on the job, and he has no qualms about commuting from New Jersey to Los Angeles to get that education.

“It’s almost hard to put in words,” said Gall. “When you ask me, I feel it inside and it’s beautiful. They’re both special dudes, they’re different, and I feel very comfortable with them. There’s so much knowledge that I haven’t even grasped, but every day I’m definitely taking away more and more. I’m very fortunate and very grateful to be surrounded by these dudes that I looked up to that love me and want to see me do good. It’s amazing.”

“Diego Sanchez, that dude’s a legend,” said Gall. “I remember watching him for years, watching him beat Nick Diaz, and he beat my big brother Jim Miller. The guy’s an animal. The fight with Gilbert Melendez was crazy. But it’s a great fight for me. He’s a legend, and in this sport, big names make nice trophies. You want to take out these big dogs, and that’s how you become a big dog.”

Gall’s been chasing “big dog” status since he was a teenager. Literally.

“Since I was a 16-year-old kid, I’ve been preparing to be here,” he said, and while he chuckles when it’s pointed out that he was just 13 when Sanchez made his UFC debut in 2005, he feels like his time has come, that his talent and determination make up for any lack of fights on his record. So if Sanchez believes Gall is too green to win this weekend’s bout, the Green Brook native doesn’t care.

“I’m sure he (Sanchez) has delusions of being able to win this fight,” said Gall. “I’m sure there must be some sort of belief that he’s clinging on to, but I think the fact is that I’m a young superstar and I haven’t even scratched the surface of what I’m gonna do. But I don’t know, I think I kind of put the pressure to him and made him agree to the fight that I wanted. We’re all tough guys and we all think we’re gonna win, but this is the most confident I’ve been for a fight, for sure.”

His words are clear, and his voice doesn’t shake in the slightest when he says them. Gall isn’t the young kid who called for his shot and actually got it anymore. It’s been three years since that UFC debut against Mike Jackson in his second pro fight, and since then, he’s been in the pay-per-view spotlight against CM Punk, handed Sage Northcutt a submission loss, and suffered his lone pro loss against Randy Brown before rebounding with a 69-second submission of George Sullivan. It’s been an education in its own right, and Gall has passed with flying colors. Yet even though it’s been a whirlwind, he’s trying to keep his mind open to enjoy the ride.

“I got some really good advice,” he said. “These are the good times, slow it all down, take your time and enjoy this. But man, is it hard. There’s a lot going on and it’s kind of a blur sometimes. It definitely doesn’t feel like three years. It feels shorter but, at the same time, it feels like a lifetime.”

Maybe those three years will be enough to have him ready for Sanchez. Gall believes they will, and he can’t wait for Year Four to get rolling.

“Year Four, I’m gonna smoke Diego Sanchez and take him out in the first round,” he said. “Then I’d like to do my next fight on International Fight Week, if not before. Then I have one more fight, I do that fight after the summer, then I get my new UFC contract and I think I’m top 15 by the end of this contract. So Year Four, Mickey Gall’s in the top 15 and I’m fighting a guy in the top 15, ready to climb.

“I want to do something special.”