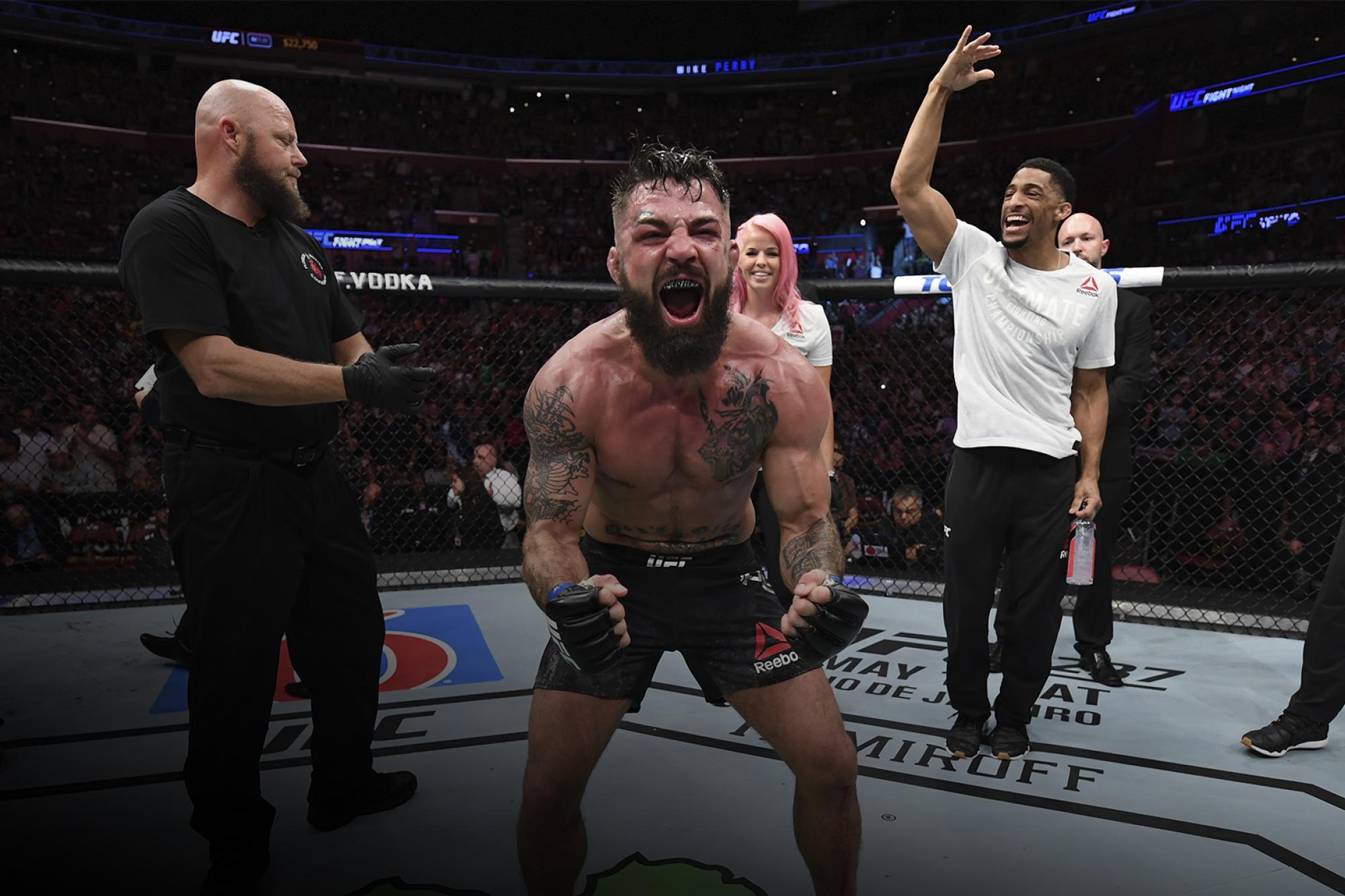 As he approaches his fight with fellow brawler Vicente Luque in the co-main event of the UFC’s first foray into Uruguay, Perry’s progression in understanding the fight game continues to grow.
By Zac Pacleb • Aug. 8, 2019

Watch Mike Perry fight once, and you pretty much understand what to expect every time he steps inside the Octagon: violence, chaos, the occasional chicken-dance.

He entered the UFC as an undefeated knockout artist, and that continued early into his run with the promotion as he went 4-1, with every win coming by knockout. A skid followed, and Perry lost three of his next four bouts, including a first-round submission at the hands of Donald Cerrone in Denver.

When Perry battled Alex Oliveira in Fort Lauderdale, he struggled early with the Brazilian’s length while still landing enough shots to keep things close. A counter left in the second round shifted the momentum, and in the third round, Perry went with a more patient and counter-focused approach to seal the win. The win – just his second decision win of his career - clearly meant a lot to Perry, though he was apologetic afterwards.

“I’m sorry for the fans that I didn’t push to the end and try for the KO,” Perry told UFC.com following the fight. “But I needed that (win).”

As he approaches his fight with fellow brawler Vicente Luque in the co-main event of the UFC’s first foray into Uruguay, Perry’s progression in understanding the fight game continues to grow.

“The way to win seems different,” he said. “It’s just really that I’ve grown up and matured, and there are smarter ways to go in there. I try to look toward the future and think about being a beat-up meathead, and how I don’t want to be that, and I want to be logical and think and be able to use my brain and function.”

Part of his fight education came from participating in a grappling competition for the first time in a gi. Perry said it was something that came on a bit of a whim, but it allowed him to compete and do so with a different mindset.

“I was like, ‘I got nothing to prove. I’m going to go out here and be smart and play the game properly,’” Perry said. “And that’s what I did, and I see how that could benefit me in the Octagon.”

His fight with Luque comes with major Fight of the Night expectations. Every single one of Luque’s victories has come by way of a finish, including an epic Fight of the Year contender with Bryan Barberena in Phoenix last February. Perry said he respects “The Silent Assassin” but feels like the level of competition he faced is greater than Luque’s opponents. Regardless, it’s pretty safe to assume the fight won’t need judges to determine a winner, but Perry is wrestling with how he’ll approach the bout.

“I battle it with myself all the time,” Perry said. “Do I want to go out there and smash into this guy as many times as it takes to beat him, or play the points, which I happen to be really good at, and I just never needed them. Now, guys are better, and they see me coming a certain way, so I can see myself turning it around for myself. Guys expect me to be one way, and then I come in and I’m a totally different way.”

So, “Platinum” is a points fighter now? Maybe, maybe not.

“I do get paid pretty good,” he said. “I do have this urge to put on a show, so we’ll see what happens when the bell rings.”

His welterweight clash with Luque is one that can launch him into the top 15, and it’s also one almost guaranteed to deliver entertainment for however long it lasts. Whether Perry decides to lean more technical in his approach or not, he knows that, at any point, he can lean back on his brawling tendencies.

“I have that dog inside that if I don’t see another way, going crazy can really get me out of some situations,” he said.