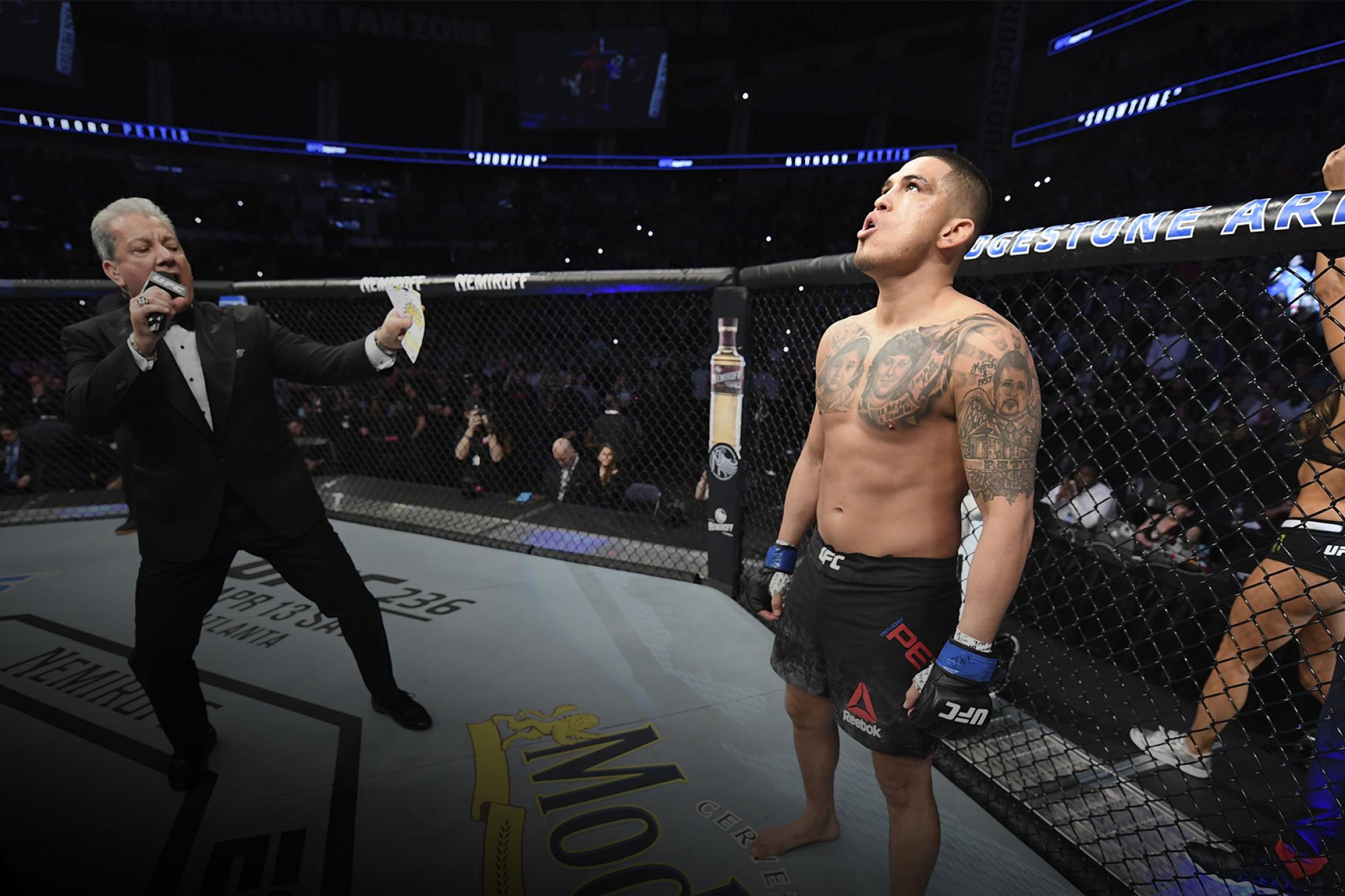 Pettis' Focus Locked In On The Right Things

Now that Anthony Pettis doesn't have to worry about Friday weigh-in's, his focus is locked in on what matters most
By E. Spencer Kyte • Aug. 15, 2019

Anthony Pettis used to spend a lot of time worrying about his weight, which in turn altered the way he used to conduct his training sessions and prepare for fights.

While winning on Saturday night was always the ultimate goal, successfully making weight on Friday was often the greater focus, especially during his rough two-fight visit to the featherweight ranks, where he came in over the 145-pound championship limit for his interim title fight against Max Holloway at UFC 206, which proved to be his last appearance in the division.

A super-strict diet and extensive roadwork left him run down and forced him to shift the way he approached other elements of training camp.

“I stopped trying to win rounds in sparring because I was saving myself for the fight,” said Pettis, reflecting on the differences between readying to fight at lightweight and competing in the welterweight division, as he’ll do again this weekend when he takes on Nate Diaz in the co-main event of UFC 241 at Honda Center in Anaheim, California. “I would think ‘I’m 165 pounds, I’m fragile,’ so I would get my rounds in, but not win the rounds.

“Now that I’m training at 185 pounds like I was this whole camp, I’m winning rounds and I’m lifting every day,” he added. “I was lifting Monday of this week and I’m two pounds over right now. My confidence is coming from my training camp and the kind of shape I’m in right now.”

His performance back in March in his UFC welterweight debut against Stephen “Wonderboy” Thompson likely has something to do with his soaring confidence, as well.

Early in the year, Pettis announced his intention to move to the 170-pound ranks and actively pursued a matchup with Thompson, believing that a victory over the two-time title challenger would propel him into the thick of the title chase and position him for even greater opportunities going forward.

Paired off in the main event of the UFC’s return to Nashville, Tennessee in late March, Pettis gave up a couple inches in both height and reach, but didn’t look out of place competing up a division. Though he was the biggest underdog on the card that evening, the former lightweight titleholder didn’t fight like it for a minute. Instead, he pressed forward from the outset, eating a collection of jabs that left his nose leaking crimson while attacking with low kicks as he tried to figure out the range problem that stumps everyone who stands across from Thompson.

Despite Thompson’s jab leaving him busted up, Pettis never wilted, and after the 10-second clackers sounded to signify the end of the second round was near, “Showtime” exploded off the fence with a Superman punch that landed flush and put the perennial contender on the canvas, ending the fight in a flash.

“I’ve been fighting for f****** forever now, so the opinions of fans don’t have an effect on me anymore,” Pettis said of the criticisms of his performance, which seemed to set aside the fact that he became the first fighter to finish Thompson and focused on everything that transpired before he knocked “Wonderboy” out.

“The game plan was exactly what I did,” he continued, reflecting on the victory, which elevated his record to 9-7 in the UFC and 22-8 overall. “We knew he was going to be fast in the beginning of rounds — he’s quick, he’s long and he’s agile — so I didn’t try to match him kick for kick, but I was attacking those legs.

“The only thing that gave me a hard time was his range; he’s a long guy. I took some punches, but I stayed true to the game plan.

“I’m only getting stronger,” he added. “I’ve got an eight-pack at 170 pounds and I’m two pounds over weight right now. I’m finding my strength at this weight class and it feels good.”

As he envisioned, the victory over Thompson indeed created an opportunity for an even bigger matchup in his sophomore appearance in the welterweight division, as Pettis welcomes Diaz back to the cage for the first time in three years this weekend.

There is some history between Saturday’s co-main event combatants, as Diaz was critical of the push Pettis received during his climb to the top of the lightweight division and offered his patented middle-finger salute to the Milwaukee, Wisconsin native on a number of occasions when they crossed paths at events.

“For me, it’s a long time in the making,” Pettis said of the pairing with Diaz, whose last appearance came at UFC 202 in his rematch with Conor McGregor. “What’s weird is that I thought there was real beef, but after watching the countdown show, it seems that he was just jealous at the time, so I don’t know what to make of it.

“I was expecting a lot more trash talk and a lot more animosity, but I’m here and I’m ready,” he added. “The thing that gets me amped up about this fight is that fans are — they’re crazy, man.”

Order UFC 241 Now For Any Device! | Check Out Every Episode Of UFC 241 Embedded

After a quick beat, Pettis continued.

Officially, the answers are McGregor, Marcus Davis and Rory Markham at welterweight and a whole host of talented fighters at lightweight, including Donald Cerrone, Jim Miller and Michael Johnson, but the questions were more focused on the unbeatable antihero status the former Ultimate Fighter winner from Stockton, California has within the MMA community.

As good as Diaz has been at different points during his 12-year, 23-fight UFC career, many, including Diaz himself, cast him as a world-beater whose only setbacks have been shady decisions or come in bouts where opponents were “too scared” to strike with the high-volume puncher and instead used their wrestling skills to grind out wins.

The reality is that he’s an abundantly talented competitor who has vacillated between stunning efforts like his back-to-back wins over Johnson and McGregor and subpar showings like his loss to Rafael Dos Anjos or lightweight championship defeat at the hands of Benson Henderson.

Despite the up and down career and inability to forecast which version of Diaz is going to show up on fight night, Pettis knows the popular 34-year-old wouldn’t be coming back if he wasn’t in great shape and ready to go to war.

“Nate hasn’t changed who he is since he started and that’s what I respect about him,” he said of Diaz. “He’s a fighter — he’s not trying to score points or win decisions; he comes out and he fights. Even though me and him have our differences, I definitely respect his style.

Regardless of which version of Diaz shows up in Anaheim on Saturday night, Pettis plans on handling his business and moving one step closer to completing the plan he laid out for himself at the start of the year.

“At the start of this year, I told (coach) Duke (Roufus), ‘I want three big fights this year,’ so I’m still on track,” he said. “I want to fight again in December, at the end of the year.