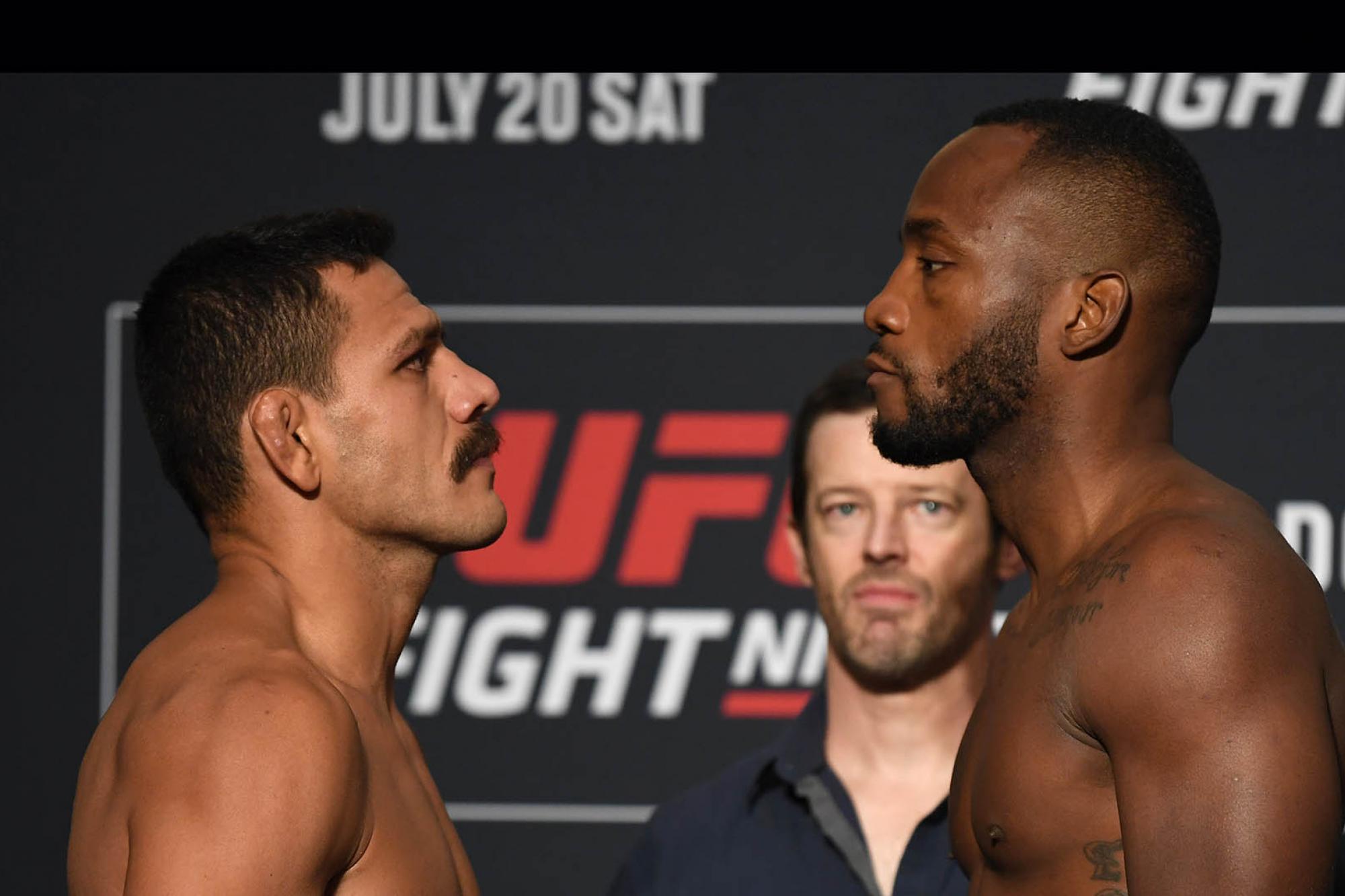 We Look At Some Of Saturday's Key Bouts, And What They Might Mean For The Future
By UFC Staff Report • Jul. 19, 2019

Saturday Night's stacked San Antonio card carries any number of implications for the fighters and their standings in the UFC rankings. We break down five key bouts, and where the winners and losers might find themselves this time next week.

Upside with Win: Virtually none. Like fellow welterweight Jorge Masvidal, RDA would be 2-2 in his last four outings, but unlike Masvidal, those two wins did not come against top 10-ranked opponents. On the basis of that alone, Masvidal is likely to stay ahead of him when the next rankings are determined.

Downside with Loss: Huge. RDA would likely find himself trailing Ben Askren in the ninth position. Both men defeated Robbie Lawler, but Askren, although he lost, faced a higher-ranked fighter in his last outing.

Upside with Win: Huge. On the basis of being 4-0 in his last four fights, a win should rocket him past the 2-2 Darren Till into RDA's current No. 4 ranking. Both Edwards and Till own victories over Cowboy Cerrone, and Till's only other big win is over Stephen Thompson, who is ranked below RDA.

Downside with Loss: Minimal. Neil Magny resides behind Edwards in the welterweight rankings, having gone 2-2 in his last four. A loss would put Edwards at 3-1 in his last four, which should be enough to keep him where he is. 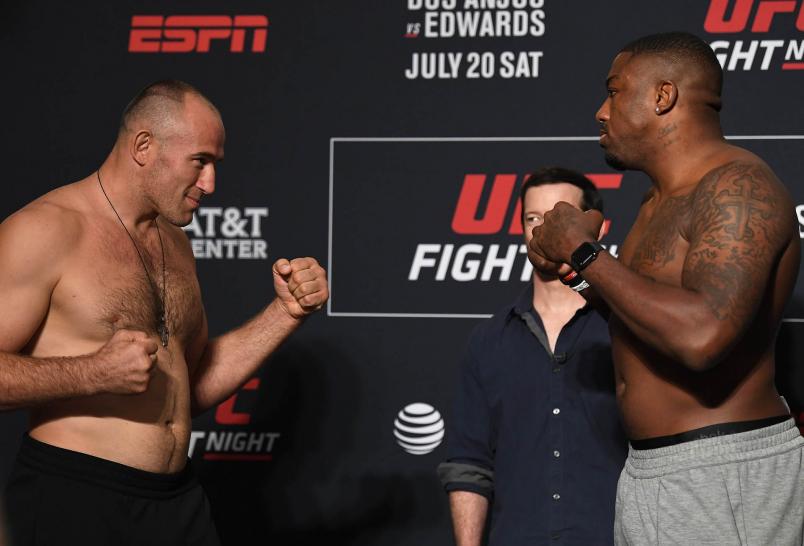 Upside with Win: Low. A win might be enough to bump "The Boa Constrictor" up into the relatively-inactive Cain Velasquez's number eight spot, but not past No. 7 Alistair Overeem; the last fighter to defeat him.

Downside with Loss: Pretty big. A loss here would put him in Tai Tuivasa's ranking neighborhood. Both fighter would be 1-2 in their last three, but one could make the case that Tuivasa's losses over hulks like JDS and Blagoy Ivanov were more "quality" losses. Look for Oleinik to have a No. 13 next to his name if this happens.

Upside with Win: Modest. He'd still likely be behind No. 11 Blagoy Ivanov, whose only major heavyweight loss is to Junior Dos Santos, but should scoot past Tuivasa and Tybura.

Downside with Loss: Also modest. The loss would make his record over his last three fights 1-1-1NC, wheras Maurice Greene, with a similar level of competition would be 3-0. It would likely be call for Greene's first heavyweight rankings, while causing Harris to slip out of the Top 15. 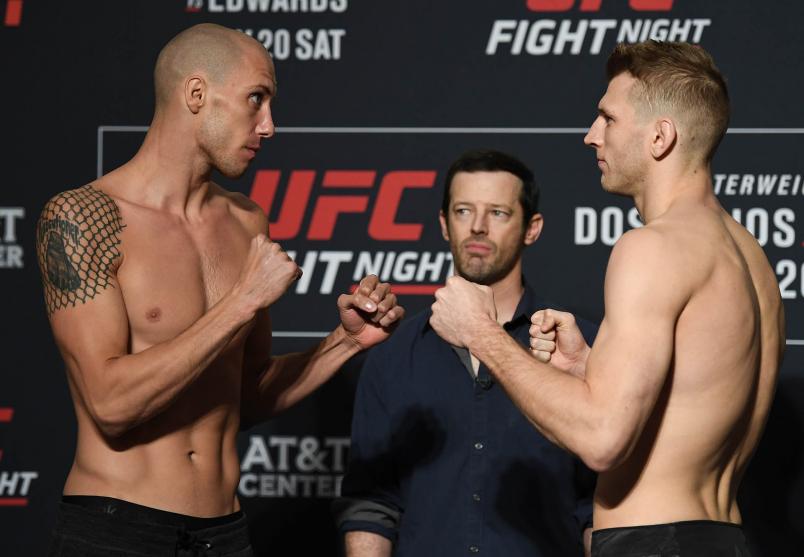 Upside with Win: Practically none. A win would be his first in three fights, which wouldn't be enough to propel him past the man in front of him, Islam Makhachev, who is undefeated in his last three.

Downside with Loss: Minimal. Vick would certainly fall out of the Top 15, making way for either Dan Hooker or Leonard Santos who are lurking in the same area, but it wouldn't be catastrophic in terms of rebounding later.

Upside with Win: Modest. Hooker should pop into the lower part of the Top 15 with a win here. His lone loss in six fights would have been to perennial tough guy Edson Barboza, and would boast more quality wins than Alexander Hernandez, who fights on the same card. Although undefeated in his last three, Islam Makhachev has yet to beat a ranked opponent, which should minimally give Hooker the No. 14 bragging rights. 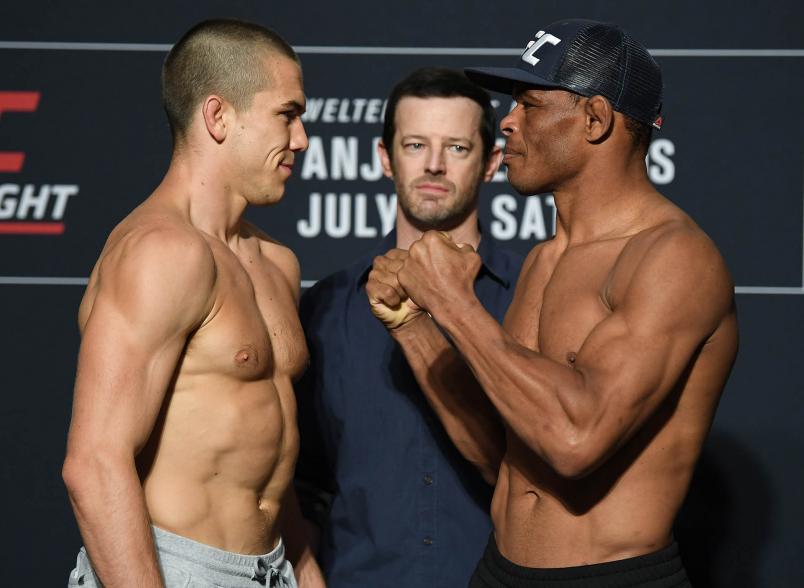 Upside with Win: Minimal. A win would return him to the glories that made one of the most exciting young prospects out there, but he would still have one more loss than the man who sits in front of him: Gregor Gillespie. Not only is Gillespie undefeated, but he also boasts a 100% finishing rate that will make him hard to pass for as long as he stays active. A win by Hooker could further disrupt his standing.

Downside with Loss: Moderate. Going 2-2 over four fights, he'd slip from the rankings with his best win being over the also-unranked Olivier Aubin-Mercier.

Upside with Win: Almost none. Even an impressive performance shouldn't be enough for him to keep the surging Leonard Santos from debuting in the Top 15 following a loss by Hernandez.

Downside with Loss: None. He remains unranked. 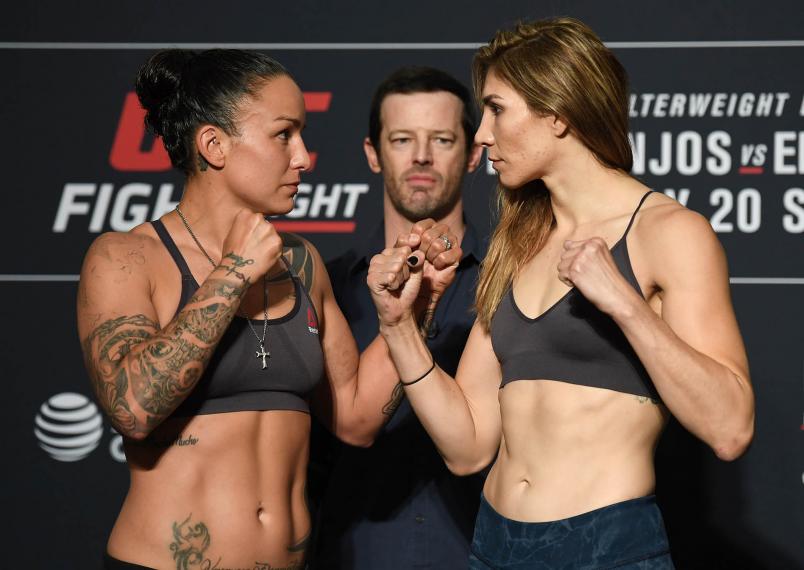 Upside with Win: Minimal. Both Pennington and Aspen Ladd were dealt defeats by No. 1 contender Germain de Randamie, but Ladd would still boast a 3-1 record over four fights, with Pennington going 2-2. One could make an argument for Pennington retiring Miesha Tate years ago, but Ladd's recent activity and résumé are likely to keep her ahead of the Coloradoan.

Downside with Loss: High. At 1-3 over four fights, she could expect to find herself in the bottom third of the Top 15 bantamweights, likely behind  the surging Macy Chiasson, who has dominantly gone 3-0 since arriving in the UFC.

Upside With Win: High. A win would likely catapult Aldana past Holly Holm into the #3 position, going 4-0 in her last four to Holms 2-2. In that stretch, only Aldana would hold a win over a highly-ranked opponent (Pennington).

Downside with Loss: Virtually none. Aldana would still own a better recent record than the fighter just behind her, Sarah McMann, with more quality wins to boot. 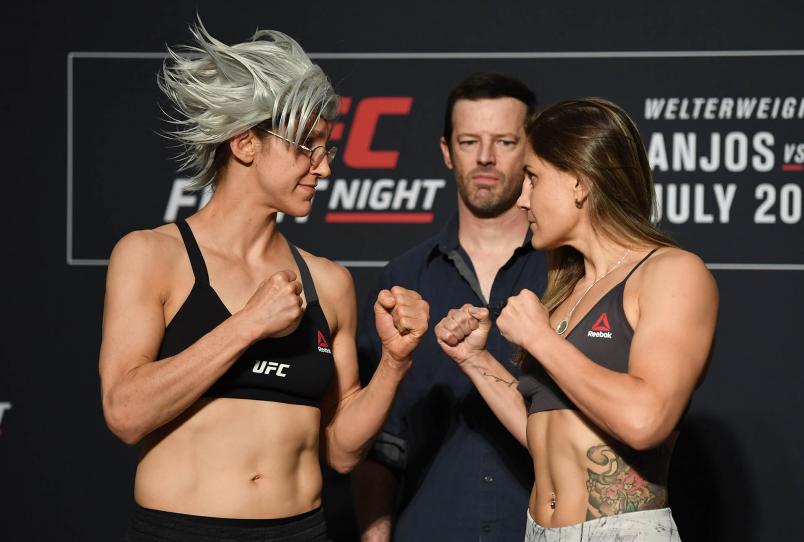 Upside with Win: Modest. With a win here Modafferi would move to #4 in the division above Joanne Calderwood. Modafferi has two top-15 wins whereas Calderwood has no currently ranked fighters in the win column of her resume at flyweight.

Downside with Loss: Medium. With a loss Modafferi should fall to the #8 spot, just ahead of Lauren Murphy.  Her resume being harder and having more recent wins gives the edge to Modafferi.

Upside with Win: Huge. With a win Maia should be ranked #4 in the flyweight division, just ahead of Joanne Calderwood. She would be one of the only fighters in the division with two top 10 wins on her resume.

Downside with Loss: With a loss Maia drops just behind Andrea Lee into the #7 slot. While Lee doesn’t have quite the strength of schedule, she is 3-0. The difference in record gives Lee the edge.

Tune into ESPN on Saturday at 9pm/6pm ET/PT to see the main card action, and see who rises and falls when the next round of rankings are released.