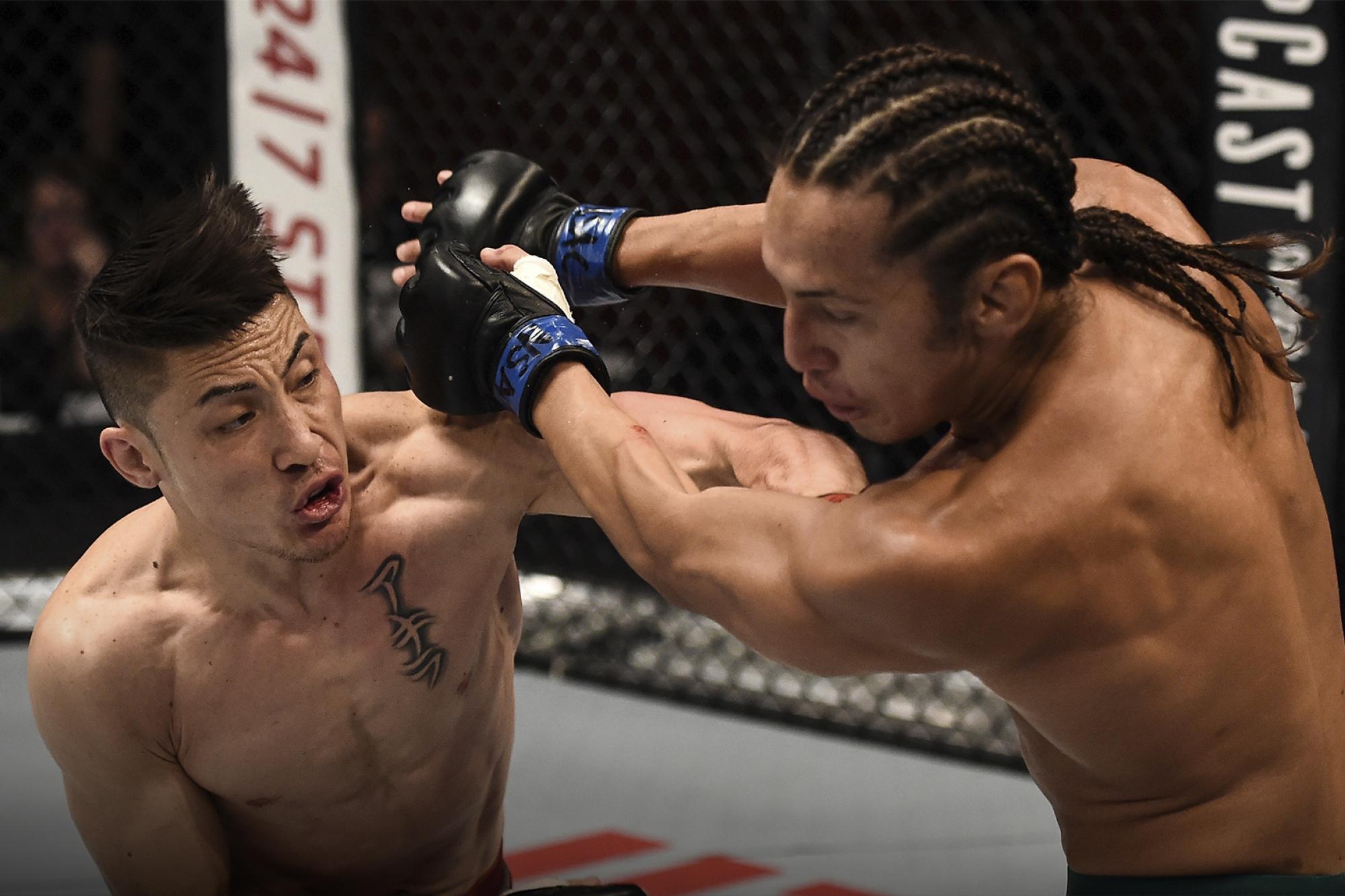 Here’s a closer look at three fighters in the early stages of their careers worth keeping an eye on long term. This is the UFC 236 edition of On the Rise.
By E. Spencer Kyte • Apr. 8, 2019

How do you get everyone fired back up following the first weekend off in since the start of February?

By delivering a pay-per-view headlined by tandem interim title fights that come complete with so much more than just the championship stakes on the line.

This weekend’s return to State Farm Arena in Atlanta, Georgia is capped by compelling title bouts in the middleweight and lightweight divisions that will not only set up future championship bouts, but also further the legacies of the combatants involved.

In the co-main event, Kelvin Gastelum looks to join the exclusive group of Ultimate Fighter winners to claim UFC gold, while Israel Adesanya aims to extend his unmatched rise to the top of the division by securing his sixth victory in 14 months and positioning himself for a showdown with Robert Whittaker later this year.

And in the main event, Dustin Poirier rides a string of three straight finishes over former titleholders and divisional standouts into his first UFC championship fight, where he’ll run it back with the reigning featherweight champion, Max “Blessed” Holloway, who enters on a 13-fight winning streak and eager to avenge his debut loss to “The Diamond” from seven years ago.

Before we arrive at the big stakes bouts of the evening, however, there is a collection of hopefuls looking to continue on their journeys towards being the next Holloway, Poirier, Gastelum or Adesanya.

Here’s a closer look at three fighters in the early stages of their careers worth keeping an eye on long term.

Based at Xtreme Couture in Las Vegas, but born in Waianae, Hawaii just like Holloway, Salmon will finally make his first official foray into the UFC cage this weekend after what has to feel like an eternity. One of the first competitors to step into the cage on Season 1 of Dana White’s Tuesday Night Contender Series, Salmon scored a unanimous decision win over Ricky Turcios, showcasing smooth boxing and a strong gas tank en route to securing the victory. His efforts also earned him the first contract handed out on the show, but while his debut was initially scheduled to occur soon after, it will only finally happen this weekend in Atlanta. First there was a fight with Augusto Mendes that fell through when “Tanquinho” suffered an injury. After Raoni Barcelos was tabbed as a replacement, it was Salmon who was felled by a knee injury and forced to withdraw. Following a year on the sidelines, the 28-year-old was finally on the cusp of competing again, only to have the bout scuttled at the last minute. This weekend, Salmon will indeed face off with the man he was supposed to battle back in November, Khalid Taha, in an intriguing clash of promising bantamweights. Taha earned top marks in a short-notice loss to Nad Narimani and brings powerful hands to the cage, while Salmon is a tactician on the feet, working behind a steady jab, fluid overall striking and quality footwork. “Boom Boom” had a fair amount of buzz behind him heading into his Contender Series appearance and coming out of his win as well. If he can deliver a strong showing in his long-awaited debut, the Hawaiian prospect should be able to recapture some of that hype and start building some momentum in the loaded bantamweight ranks.

Jackson is another Contender Series alum, but while Salmon has been unable to compete since his victory in Season 1, the 26-year-old Wisconsin native has been staying pretty active since defeating Rico DiSciullo early in Season 2.

The Pura Vida BJJ and MMA representative didn’t earn a contract following his win on the opening card of Season 2, but Jackson jumped at the opportunity to replace Benito Lopez at UFC 227 as a means of making his official Octagon debut. While he came up short against divisional dark horse Ricky Simon, Jackson showed flashes of promise and returned a little under five months later to secure a first-round submission win over Brian Kelleher to earn his first UFC victory.

Paired off with veteran Andre Soukhamthath, this weekend’s bout is another opportunity for Jackson to establish himself as one of the top prospects in a division currently flush with emerging talents.

Boasting long limbs, massive hands and a strong wrestling base, Jackson has risen through the ranks quickly, making it to the biggest stage in the sport just 14 months after his first professional fight. While he stumbled in his debut and could falter again at some point, maybe even this weekend, his upside is readily apparent and as Jackson continues to gain experience and sharpen his skills, he’s going to become a problem for anyone looking to keep him from climbing the divisional ladder.

First off, I feel obligated to include Costa in this collection simply because he’s walking around with one of the best nicknames in entire sport, “The Zohan.” If you’re willing to rock with “The Zohan” as your moniker, given how utterly ridiculous that movie and character was, you have my attention.

Nicknames aside, there is a lot to like about Costa’s long-term prospects as well.

Training out of Lauzon Mixed Martial Arts, the 24-year-old featherweight went 3-0 as an amateur, turned pro, couldn’t get a fight to come together, and went three years without competing before finally having his first professional bout last summer. After racking up four quick stoppage wins on the New England regional circuit, Costa got the call to the Octagon, where he’ll square off with Brandon “Killer B” Davis in this weekend’s opening bout.

Davis is a tough, seasoned vet who fought four times in eight months last year. Though he only came away with a single victory, the Alan Belcher trainee hung tough and had his moments in each of those fights and is a tremendous litmus test for Costa as he looks to start his UFC adventure.

If Costa can continue his run of impressive finishes this weekend, he’ll instantly establish himself as one to watch in the 145-pound weight class and make it clear that you really don’t want to mess with “The Zohan.”

Sorry, I couldn’t help myself.