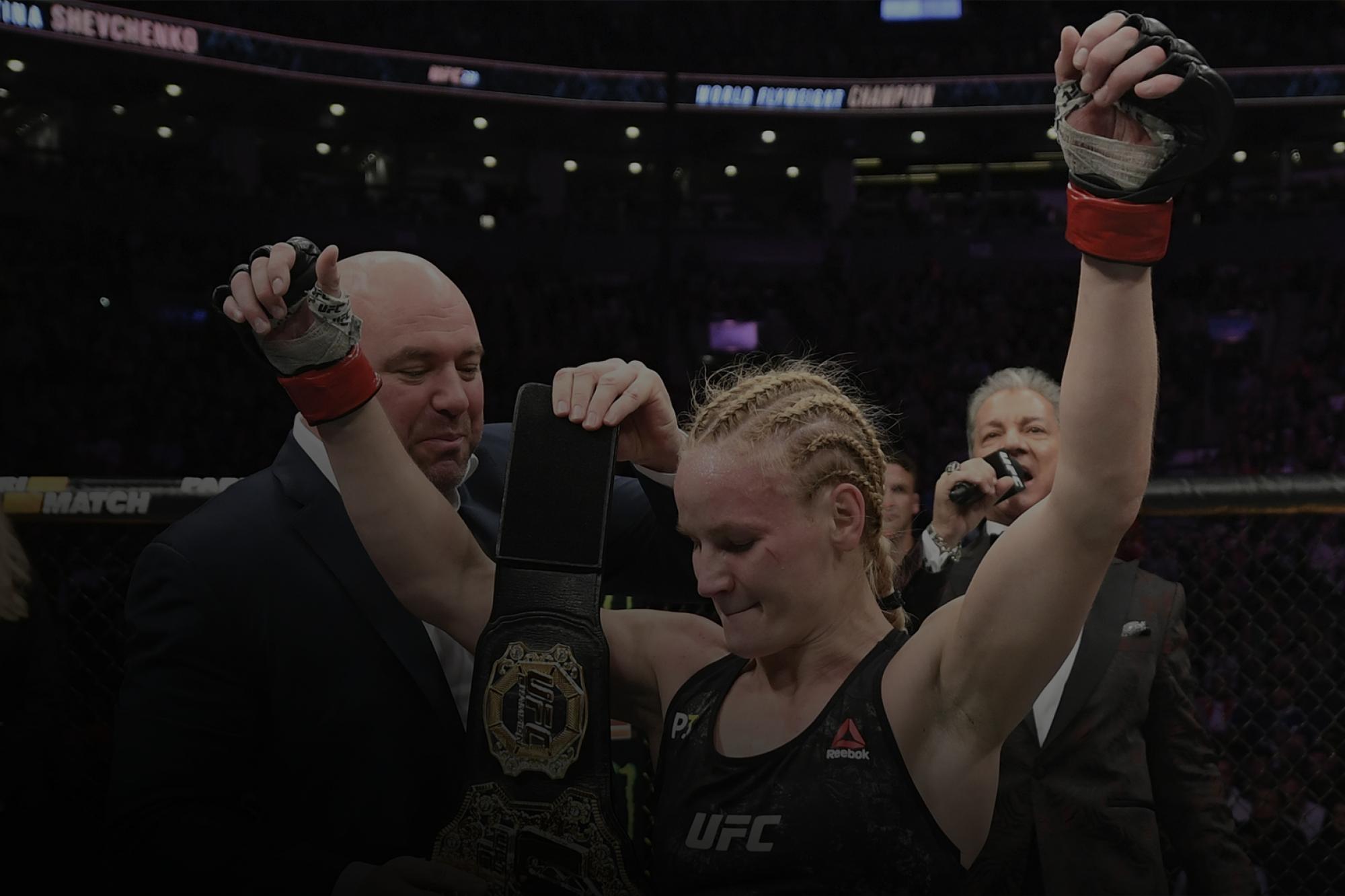 It took two weight classes and two title fights, but on Saturday night, Valentina Shevchenko got a well-deserved world championship belt, as she scored a unanimous five-round decision over former strawweight titlist Joanna Jedrzejczyk to win the vacant UFC flyweight title in the UFC 231 co-main event at Scotiabank Arena in Toronto.

Scores were 49-46 across the board for former bantamweight contender and title challenger Shevchenko, now 16-3. Jedrzejczyk falls to 15-3.

Jedrzejczyk was busy with her striking in the opening minute of the fight, but as soon as Shevchenko was able to get her hands on her, she easily secured the takedown. After taking some strikes, Jedrzejczyk was back on her feet, but Shevchenko kept her locked up against the fence. With 1:15 left, Jedrzejczyk got loose, and while she remained busy, a kick to the body by Shevchenko was the telling blow of the round.

Jedrzejczyk did her best to keep Shevchenko at the end of her strikes in round two, but each series of strikes was met with sharp counters from the Kyrgyzstan native, who again took over once she was able to slam Jedrzejczyk to the mat with a little over 90 seconds remaining. On the mat, Jedrzejczyk had no answers, as Shevchenko landed several hard elbows.

Shevchenko wasn’t able to score the takedown in the third, but she still landed several hard shots over the course of the round. Jedrzejczyk also landed her best shots of the fight, but they had little effect on “Bullet.”

In the second minute of round four, Shevchenko got the fight to the mat, but Jedrzejczyk rose fairly quickly. Shevchenko kept Jedrzejczyk in a headlock against the fence before moving into a more conventional clinch, using her strength to her best advantage. With under a minute left, the two broke, Shevchenko landing the better blows down the stretch.

Jedrzejczyk came out fast for the final round, landing a few hard right hands before Shevchenko clinched.  Shevchenko wasn’t working much in the clinch, but Jedrzejczyk did before referee Todd Anderson separated the two with three minutes left. Jedrzejczyk again pushed the pace, but when the 30-year-old Shevchenko did throw, she was making it count, leading to a strong finish and a world championship.

In his first bout since July 2017, welterweight contender Gunnar Nelson got back in the win column, submitting Brazil’s Alex Oliveira in the second round.

Nelson looked to be in control early, especially after securing a takedown and a body triangle following a blatant fence grab from Oliveira, but the “Cowboy” roared back, reversing position and landing a series of thudding ground strikes before a late ankle lock attempt by Nelson.

Oliveira locked Nelson up against the fence to start round two and he bloodied his foe’s nose in the process before Nelson reversed position and got the takedown two minutes into the frame. Nelson quickly got into the mount. In the final minute, Nelson opened Oliveira’s forehead up with an elbow, and as Oliveira turned, the Iceland native locked in the rear naked choke that forced Oliveira to tap out at 4:17 of the second round.

The pattern of the fight was established in the first round, with Dawodu using a varied striking attack to mark up and stay a step ahead of Bochniak throughout. Bochniak was able to score a trio of takedowns over the course of the three-rounder, but Dawodu didn’t stay grounded long, and while one judge surprisingly saw it for the New Englander 29-28, he was overruled by his two colleagues, who each scored it 30-27 for Calgary’s Dawodu, now 9-1-1. Bochniak falls to 8-4.

In a thrilling main card opener, Thiago “Marreta” Santos continued to impress at 205 pounds, as he knocked out No. 7-ranked contender Jimi Manuwa in the second round.

Both fighters engaged immediately, with Santos scoring flash knockdowns with each hand in the early going. Manuwa was able to recover and slow Santos down with a clinch against the fence, and with a little over three minutes remaining, Manuwa began to land some bombs of his own, forcing Santos to look for – and get – the takedown. Manuwa bounced up quickly and got right into the clinch again. As the two broke, they took turns rocking each other before going back into the clinch for a brief break. With a minute left, it was another heated exchange and this time Santos got rocked before falling to the deck after missing a kick. Manuwa took control on the mat, landing a couple strikes before the horn.

Santos and Manuwa traded kicks to start round two, and then Santos wobbled Manua with power shots at short range before a left to the head sent Manuwa down and out with no follow-up blows necessary. The time of referee Todd Anderson’s stoppage was :41 of the second round.

With her new belt over her shoulder, Valentina Shevchenko spoke with Megan Olivi backstage at UFC 231.

Gunnar Nelson impressed in his return to the Octagon and chatted with Megan Olivi backstage in Toronto.

We caught up with Hakeem Dawodu backstage after his UFC 231 victory to get his thoughts on the fight and more.

We caught up with light heavyweight Thaigo Santos after his UFC 231 KO victory over Jimi Manuwa.