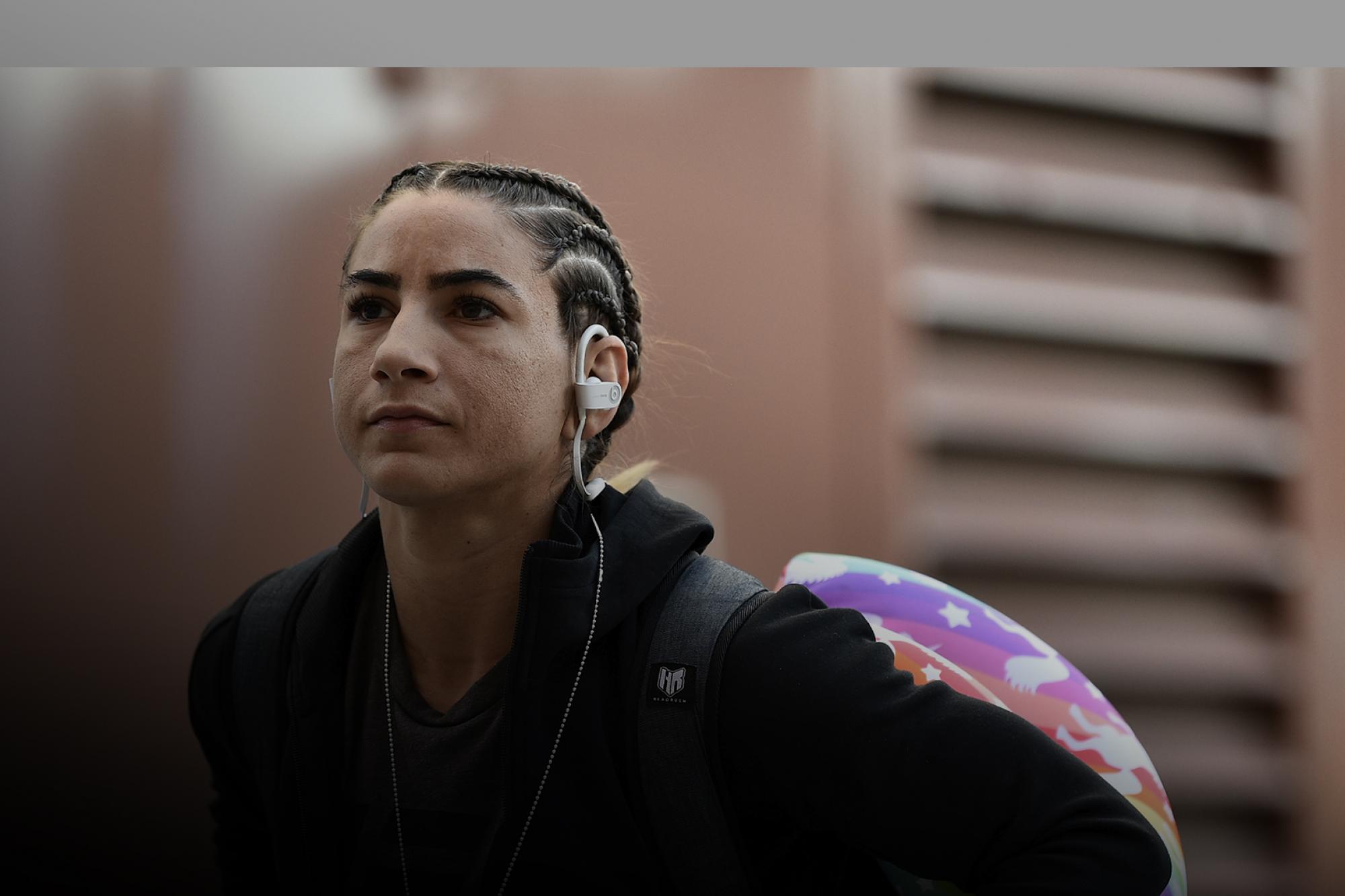 Torres Is Determined To Climb Back

After dropping her last three contests, Tecia Torres' only concern is focusing on what she can control at UFC Uruguay
By E. Spencer Kyte • Aug. 6, 2019

Tecia Torres is in a strange position heading into her main event assignment this weekend against Marina Rodriguez at Antel Arena in Montevideo, Uruguay.

Still firmly entrenched in the Top 10 in the UFC strawweight division as she has been since being part of the cast on Season 20 of The Ultimate Fighter, where the 115-pound weight class was introduced in earnest, the 14-fight veteran enters Saturday’s bout on a three-fight skid, but it’s not your everyday, average, run of the mill three-fight slide.

The first loss in the run came against current champion Jessica Andrade. The second occurred last summer in Calgary against long-time titleholder Joanna Jedrzejczyk and most recently, the American Top Team product landed on the wrong side of the results against Weili Zhang, who is set to face Andrade for the strawweight title later this month in Shenzhen, China.

“It sucks losing three in a row, but when I look at it, the four fights that I’ve lost, three of them are to champions and one of them is fighting for the championship,” said Torres, whose first career loss came against former champ Rose Namajunas, whom she beat when the two were still earning their stripes under the Invicta FC banner. “In less than a month, Weili Zhang could be the next champion and then all of my losses would have been to champions and all by decision.”

Losing is never enjoyable and finding a silver lining in your setbacks is a necessity that every competitor would happily trade for a victory any day, but everything Torres is saying is true and carries a great deal of weight.

Each of the four women who have bested her to date is an elite competitor, with the quartet brandishing a combined 25-7 record and 11 finishes in UFC strawweight competition, where three of those losses came in fights between one another.

Torres went the distance with all four of the divisional standouts, winning a round on all three judges’ scorecards in her bouts against Namajunas and Andrade, and giving Jedrzejczyk and Zhang a tougher time than the finally tallies portray.

“If you look at their fights with a lot of the girls in the division, they cremate them and smash them up, they’re all bloody and it’s a rough fight,” she said of the quartet of standouts to get the better of her inside the Octagon. “But my fights, they’ve all been decisions and it’s been a point thing where they didn’t do anything to me. 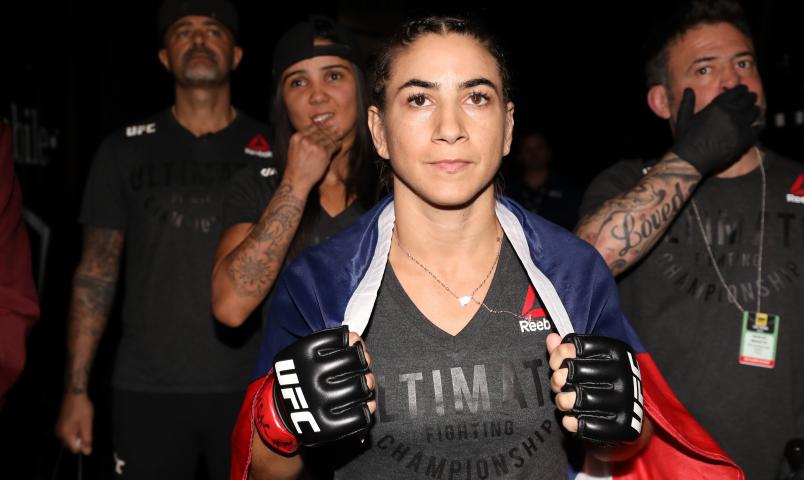 “Some of them I even won a round and then lost a couple,” she added. “They were great opponents and they were decision losses — nothing really happened in the fights; they just won.”

As she readies to take on Rodriguez this weekend, Torres is acutely aware of the key areas of her approach she needs to improve in order to get back into the win column and continue holding down a place in the upper tier of talent in the highly competitive 115-pound weight division.

“When I look at it, it really is a confidence thing; I give my opponents too much respect,” said the highly self-aware Torres, who turns 30 later this month. “I believe in their greatness more than my own.

“It just comes down to my confidence and being mean,” she continued. “I have a problem with being mean. I’m not mean. I’m super-nice, and when I get in there, I can get complacent and let things just happen. I hope to fix that in this fight.”

Torres started taking steps designed to help her halt her current slide in advance of her fight with Zhang in March, making the difficult decision to resume training at American Top Team, which means long stretches away from her fiancée, UFC bantamweight stalwart Raquel Pennington. 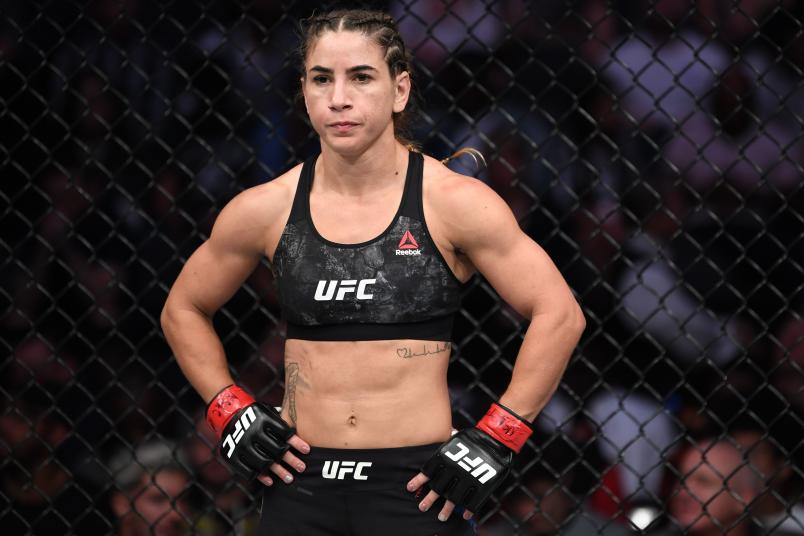 “When I left American Top Team to go to Colorado, it was truly because I was following my heart; it wasn’t because there was anything wrong with the gym or anything like that,” said Torres, who spent several years training at the famed South Florida outpost before relocating to Colorado and training alongside Pennington and her team. “I love the coaches there, I love my teammates and there just really are amazing girls in every weight class there and that really does help me. I feel better training there because I have that.

“I had great training back in Colorado and at one point, I liked it better than at American Top Team because I had more one-on-one training,” she added. “But I do like having people that are my size (to train with). Obviously Raquel is a fighter, but she’s 30-40 pounds bigger than me, which is a big difference, so I feel like I’m doing the right thing for my career.”

After keeping things pretty basic for her first camp back in Florida in March, Torres has set herself up a little more comfortably this time around, getting an apartment and that punch-buggy she always wanted, as well as two of the fighting couples’ dogs.

Feeling more settled and fully aware of the importance of this fight, the veteran has been locked in on Rodriguez and doing whatever it takes in order to get back into the win column and re-affirm her standing as one of the top talents in the strawweight division, drawing inspiration from a recent title challenger who was once in a similar position.

“She looks like a great striker, great Muay Thai background, comes forward the whole fight,” Torres said of her opponent this weekend, who has earned a win and a draw in her first two Octagon appearances and carries a 10-0-1 record into their showdown on Saturday in Montevideo. “Her ground game looks basic and she’s going to be the taller, rangier fighter. I expect her to be pretty strong because she’s bigger than me, but it’ll be a fun fight.

“A win over Marina will do a lot for me,” she continued.”It will bring back a lot of confidence that I may have lost losing these last three fights and I think it will bring a love for fighting back too.

“It sucks losing back-to-back-to-back, but one of my coaches showed me Jessica “Evil” Eye as an example: she lost three or four in a row before winning a few and getting a title shot and I have to look at it like that — yes I lost three in a row, but at the end of the day, those girls were champions and great competitors and I still have it in me to get in there, win a few more and be right back in title contention.”

And while she’s more focused on her fight than the milestone birthday that is on the horizon, a win this weekend in Uruguay is definitely the one present Torres wants to get for herself.

“I’m not freaking out yet about being 30,” she said. “It’s kind of crazy looking back like, ‘Damn — I’m getting kind of old now,’ but I’m excited. I still have a lot of life to live, a lot of great things that have already blessed my life and I’m looking forward to the next decade, the next journey, and the next chapter in life.

“But getting a win before my 30th birthday would be very sweet.”