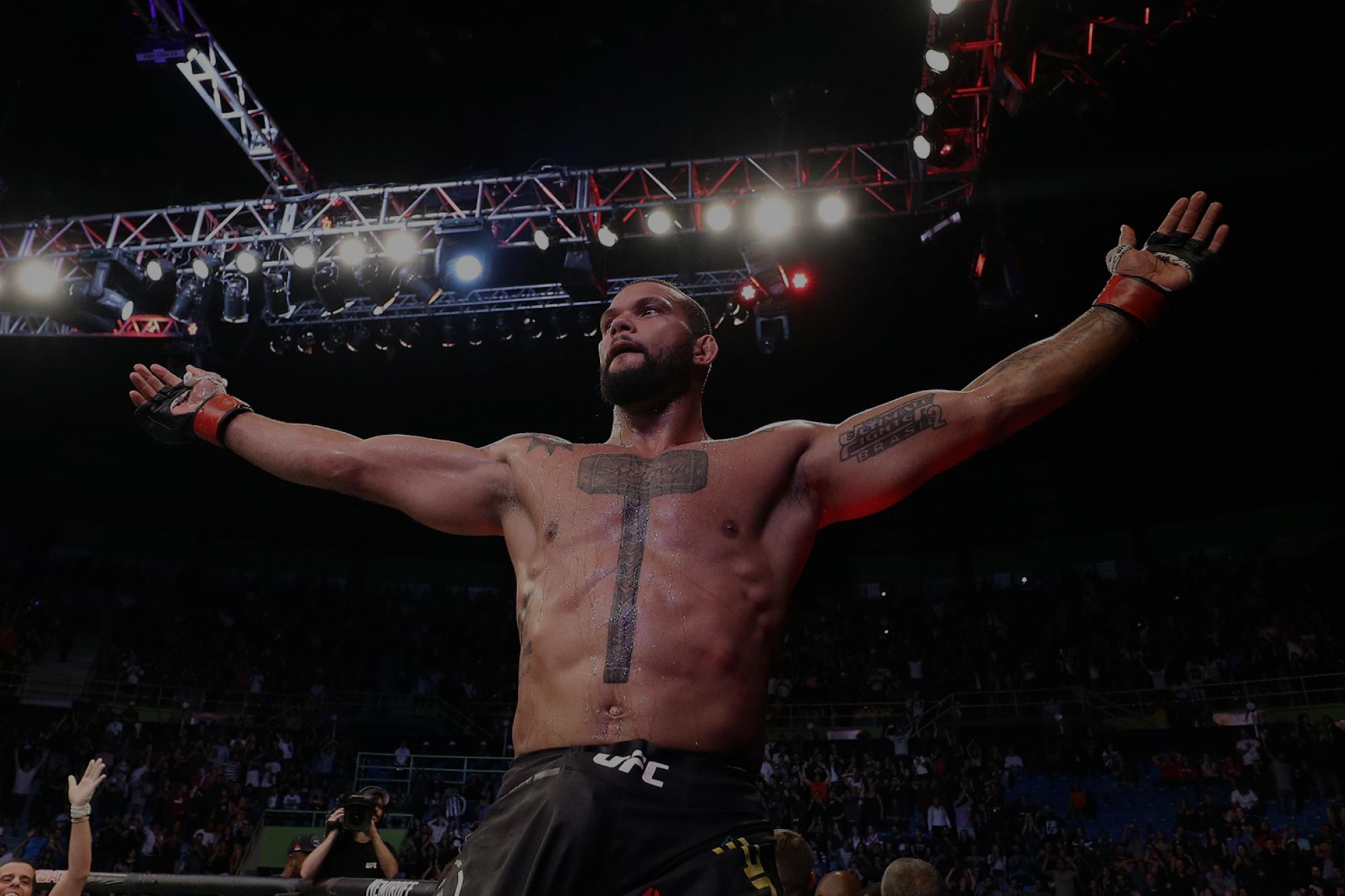 A move to light heavyweight changed everything for Thiago Santos, and even though he's doesn't have a title shot yet, he'll keep fighting until it happens.
By E. Spencer Kyte • Feb. 21, 2019

Sometimes the narratives that look like they make complete sense are nothing more than a coincidence.

Take the case of Thiago Santos and his move to the light heavyweight division.

Just over a year ago, the Brazilian marauder squared off with Anthony Smith in a thrilling back-and-forth battle that contained more action than you could imagine transpiring in six minutes and three seconds. Both men threw with reckless abandon, launching rockets at each other every time they reared back and released a strike, connecting with serious force and yet somehow still managing to remain capable of continuing into the second round. 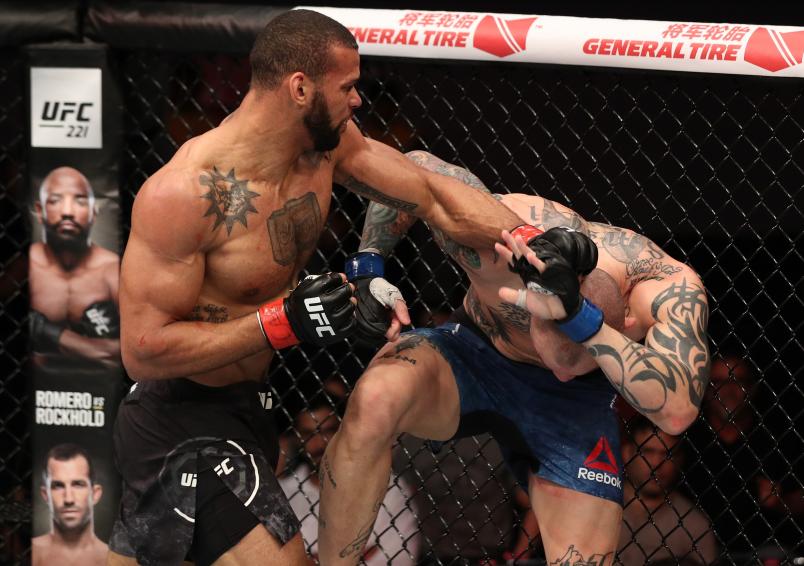 Early in the middle stanza, Santos drove home a blistering body kick that caused Smith to buckle over, and the wild affair was brought to a halt soon after.

Santos made a quick return, stepping into the cage 11 weeks later against David Branch, and he landed on the wrong side of a first-round knockout.

Two months after that, Smith debuted as a light heavyweight, making quick work of former champion Rashad Evans before doing the same to Mauricio “Shogun” Rua six weeks later in Hamburg, Germany. In a matter of two fights, “Lionheart” had become a dark horse contender with intriguing upside in the 205-pound weight class, while nine victories in 14 fights over five years still left Santos outside of the middleweight Top 10.

Following his back-to-back wins over Evans and Rua, Smith landed a main event assignment against Volkan Oezdemir, the Swiss contender who began 2018 by challenging Daniel Cormier for the light heavyweight title. Two days after that fight was announced, Santos battled promotional newcomer Kevin Holland in the opening bout of the UFC 227 main card.

Six weeks later, when the opportunity to step in against light heavyweight contender Jimi Manuwa at home in Brazil presented itself, Santos jumped at the opportunity, though he ended up fighting fellow middleweight Eryk Anders instead, as the British veteran was sidelined with a hamstring injury. 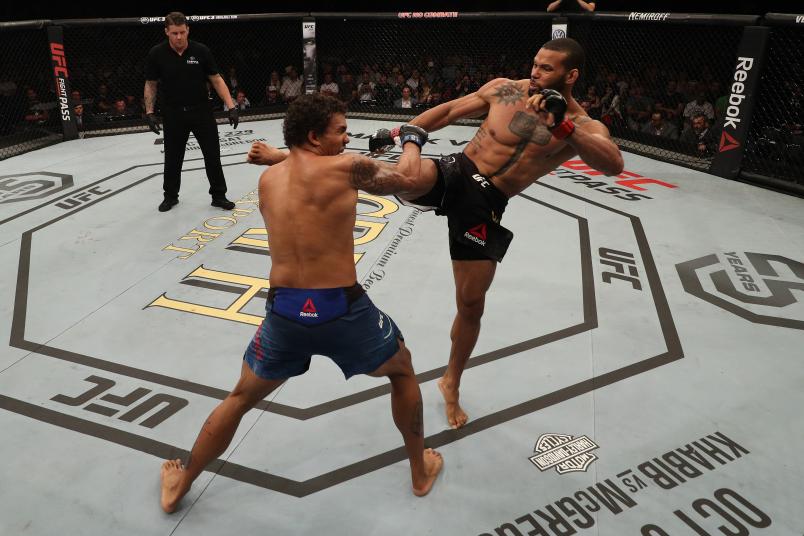 Once Manuwa got the “all clear,” the duo was re-booked and Santos emerged victorious, closing out his five-fight 2018 campaign with a performance similar to his first outing of the year against Smith, who finished Oezdemir in October and used his post-fight interview time to politely request an opportunity to fight for the light heavyweight title.

As far as narratives go, the idea that Santos saw how much success someone he had quite recently beaten was enjoying fighting up a division and decided to follow suit seemed like an easy sell.

Related: Fight by Fight Preview | Blachowicz: Finally, It's My Time

Of course, that’s not the actual reason why “Marreta” opted to change divisions, even if it does sound like a great storyline given how their years played out.

“It had nothing to do with that,” Santos said through a translator when asked if Smith’s success played any part in his decision to move up to light heavyweight. “Making middleweight was too tough and I decided to move up.”

Just as the idea that seeing Smith quickly rise into contention prompted Santos to reconsider where he was competing sounded plausible, the notion that making the cut down to the 185 pound limit became too daunting for the hulking Brazilian specimen is even more easy to understand.

Standing six-foot-two and looking like he’s chiseled out of solid marble, the 35-year-old former paratrooper was massive for the middleweight division and while he never missed weight, the Brazilian veteran knew that putting his body through the rigorous process to make weight meant that he wasn’t stepping into the cage at his very best on fight night.

“My performances at middleweight were a bit weak because of the cut,” explained Santos, who collected victories over Elias Theodorou, Nate Marquardt and Jack Hermansson during his time at middleweight.

So he opted to relocate, and just as Smith did, Santos has quickly put himself in the thick of the title chase in the 205-pound weight division.

While “Lionheart” is set to challenge Jon Jones for the light heavyweight title next week in the main event of UFC 235, Santos is readying to main event this weekend’s debut in Prague, Czech Republic against Polish veteran Jan Blachowicz.

On this edition of Inside the Octagon, we preview the main event of UFC Prague featuring Jan Blachowicz and Thiago Santos.

“I’m very happy to be the main event again,” said Santos, who headlined his first event back in September when he took on Anders in his light heavyweight debut. “I’m glad the UFC has given me this opportunity. I’m a little bit closer to my dream of being champion now.”

After beginning his UFC tenure with just two wins in six starts, the 35-year-old Blachowicz has used the last 16 months to bounce back and establish himself as a legitimate contender in the light heavyweight division. He closed out 2017 with two wins in three months, then followed it up by avenging his previous defeat to Manuwa in March and choking out the returning Nikita Krylov in September to push his winning streak to four.

Well-rounded and well-seasoned, the Polish veteran is a stern test for Santos as he continues on his quest to challenge for championship gold. Accepting that, “Marreta” opted to keep his thoughts on the matchup pretty cut and dry, rather than offer niceties about his impending opponent and provide some pre-packaged line about how he’s going to breeze through Blachowicz on Saturday without much trouble.

And after competing five times in 2018 after starting his campaign with a win in February, will the surging Brazilian striker look to do the same following a win over Blachowicz this weekend?

“I don’t choose my opponents; I will fight whoever the UFC puts in front of me,” said Santos. “But I want to get the belt. I want the winner of Jon Jones and Anthony Smith.”

For the record, he thinks Jones will retain his title, but added that he wouldn’t be surprised if Smith beats him.

Either way, “Marreta” wants next.