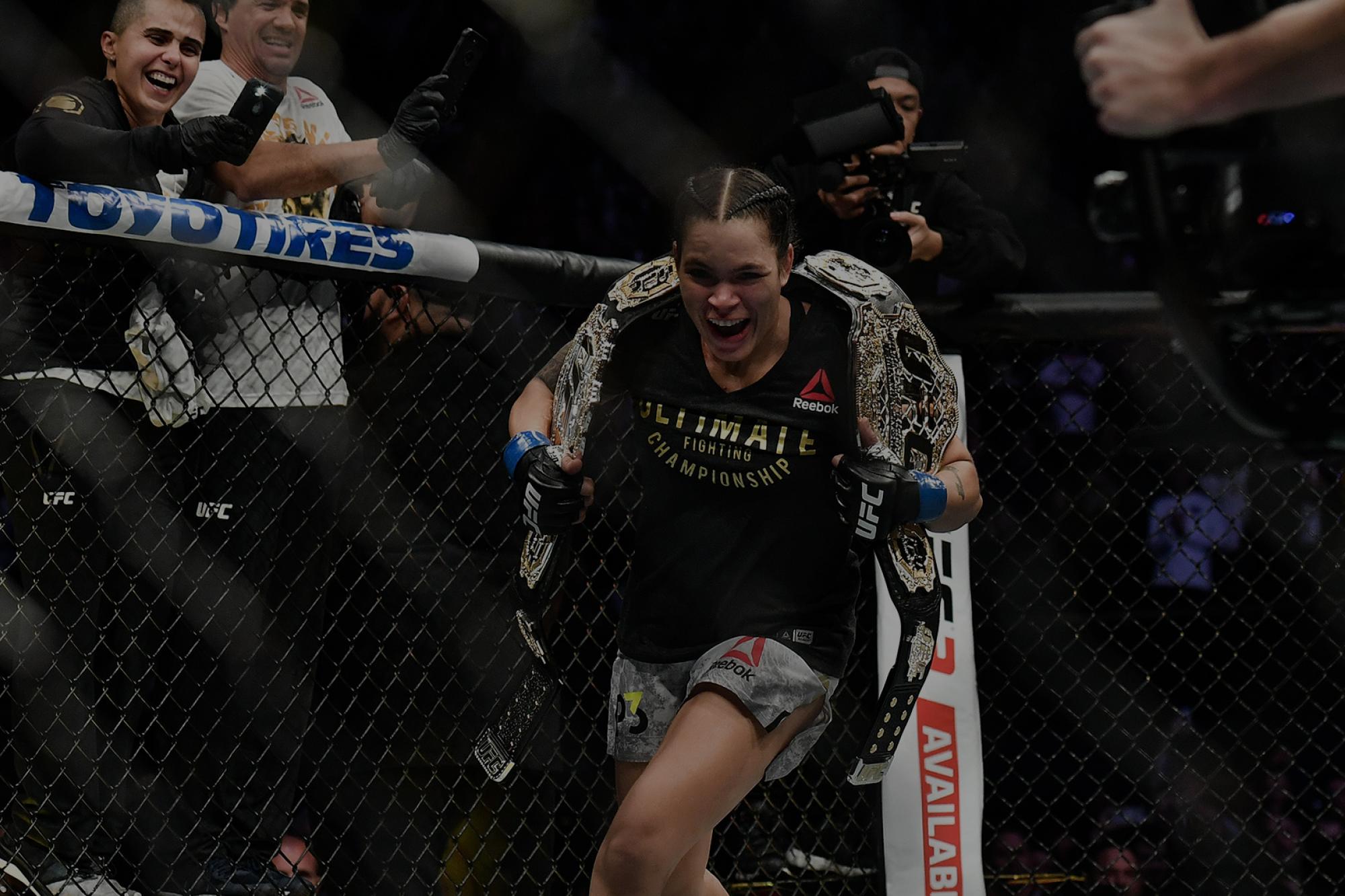 Amanda Nunes made history in more ways than one at The Forum in Inglewood. With her stunning 51-second knockout of Cris Cyborg in the co-main event of UFC 232, Nunes became the first woman to hold UFC titles in two divisions, the third fighter to hold two titles simultaneously and the first fighter to beat her fellow Brazilian in over 13 years.

That’s one heck of a Saturday night for “The Lioness,” the UFC women’s bantamweight champion who now has a UFC women’s featherweight belt to put in her trophy case, along with a list of wins over Cyborg, Ronda Rousey, Miesha Tate and Valentina Shevchenko.

Sounds like a Hall of Fame resume already, and if there are any doubters, they likely were silenced in the City of Angels.

There was no feeling out process in this one, with Cyborg and Nunes getting after it immediately. But in the midst of the exchanges, Nunes proved to be the faster and more accurate striker, with right hands producing several flash knockdowns before a final right hand ended Cyborg’s night, with referee Marc Goddard stepping in to halt the fight 51 seconds into the fight.

Michael Chiesa’s welterweight debut was a successful one, as he submitted former interim champion Carlos Condit in the second round.

Chiesa locked up with Condit early in the fight and got him to the mat. Condit tried to scramble his way out of trouble and he succeeded, making it back to his feet. Chiesa stayed locked on to his foe and scored a second takedown with a little over three minutes left, but Condit stayed busy from the bottom and nearly locked up an armbar before Chiesa escaped and the two rose. Another Chiesa takedown followed, along with another Condit submission attempt, wrapping up an interesting round.

Going back to the mat to start round two, Chiesa avoided Condit’s offense, and this time he sunk in his own submission lock, finishing Condit with a kimura that forced the Albuquerque native to tap out at :56 of the second round.

Cardio was king for Corey Anderson, as he outlasted Swedish powerhouse Ilir Latifi over three rounds en route to a unanimous decision win in a matchup of light heavyweight contenders.

Anderson was the aggressor throughout the opening round, but it was Latifi consistently landing the harder shots, whether a left to the jaw or kicks to the calf.

The second was all Anderson, though, as Latifi visibly tired and “Overtime” took over, landing a varied array of strikes on his foe.

Latifi remained dangerous in the third, even though he wasn’t able to put together the consistent offense that might have brought the fight back into his favor, allowing Anderson’s workrate to lead him to victory.

Australia’s Alexander Volkanovski made a statement in the main card opener, as he extended his winning streak to 16 with a second-round stoppage of perennial featherweight contender Chad Mendes.

Mendes and Volkanovski set a fast pace, with Mendes holding the edge on the feet, but Volkanovski not far behind. A takedown by Mendes in the final minute probably earned him the round, but things were just heating up.

A minute into the second round, Mendes rocked Volkanovski and then dropped him with a left hand. The Aussie was up immediately and he got even with some hard punches in return. With three minutes left, Volkanovski got more aggressive with his striking, but Mendes responded with a takedown. Volkanovski got up quickly, and both were now bleeding. With 1:45 left, Mendes got another takedown, and this time he took his foe’s back. In a subsequent scramble, they rose to their feet, and Volkanovski landed several hard shots before a body shot followed by a right to the head crumbled the former world title challenger, prompting referee Mark Smith to stop the bout at 4:14 of round two.