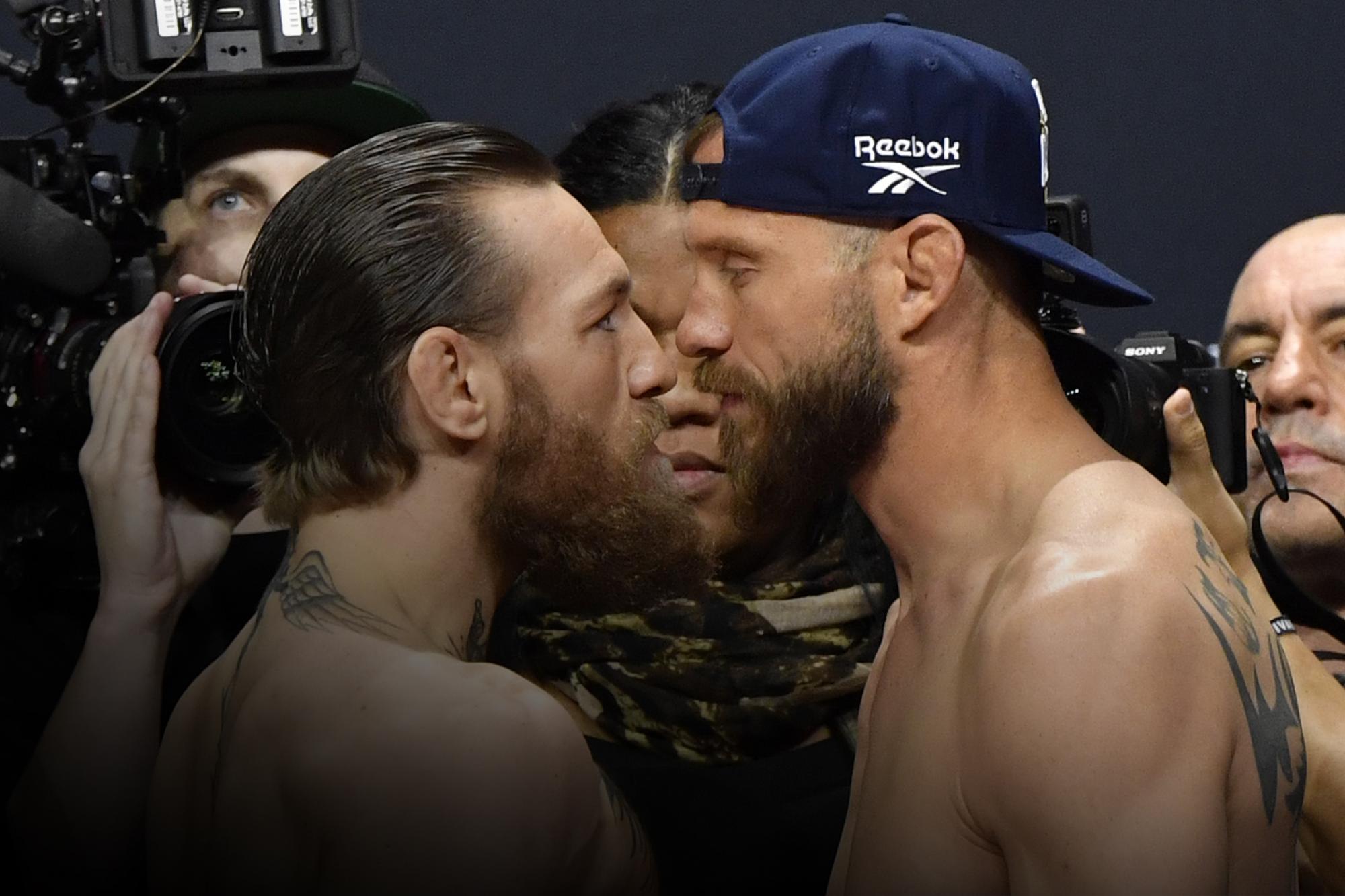 Check out all the big winners from Las Vegas
By Thomas Gerbasi, on Twitter: @TGerbasi • Jan. 18, 2020

Conor McGregor returns to the Octagon against the winningest fighter in UFC history live in Las Vegas, Nevada. Check out all the action, highlights and results right here.

Colombia’s Sabina Mazo got her year off to a winning start, as she took a three-round split decision victory over JJ Aldrich.

Aldrich had a solid first round, using her accurate punches and lateral movement to keep Mazo from setting her feet for any return fire. The Colombian came out fast for the second stanza, and while she landed a couple hard knees and a head kick, Aldrich bloodied her foe and scored with the harder shots. Mazo put Aldrich back in the clinch to start the final round, though, and she kept the heat on with excellent work at close range as Aldrich slowed down, and that late surge was enough for her to take the hard-fought win.

Contender Series graduate Aleksa Camur was victorious in his UFC debut, as he scored a close, but unanimous, decision over Justin Ledet in a light heavyweight bout.

The first two rounds were close, with Camur busier, but Ledet more effective as his veteran poise allowed him to stay calm under the fire from the Ohio newcomer, whose solid work against the fence late in the second round may have allowed him to steal the round.

The third round was as hard to call as the previous two, but a late takedown sealed the deal for Camur, who kept his unbeaten record intact while fighting in front of his longtime training partner, UFC heavyweight champion Stipe Miocic.

Veteran lightweight Drew Dober picked up a big win in prelim action, as he knocked out highly-regarded prospect Nasrat Haqparast in the first round.

Haqparast was swinging for the fences from the start, but the experienced Dober remained calm and waited to pick his shots. And when he landed with a counter left, it was basically game over. Haqparast fell to the mat and a series of unanswered blows brought in referee Mark Smith to halt the fight at 1:10 of the opening frame.

Rising Russian star Askar Askarov scored the most important win of his career as he took a three-round unanimous decision over fellow flyweight contender Tim Elliott.

Askarov’s striking was sharp in the first round, and he appeared to be a punch or two away from a finish when he rocked Elliott with a right hand with three minutes left. As the fight went to the mat, Askarov was in control, but Elliott cleared his head and tried to stay busy from his back before a late surge of ground-and-pound from the Dagestan native.

Elliott kicked off round two with a crowd-pleasing throw, but Askarov got right back to his feet and bulled the veteran to the fence. Once separated, Askarov continued to land with solid blows that were interrupted by two more throws by Elliott. After the second throw, Elliott was able to get some top control time, but Askarov kept him guessing with submission attempts.

In the third, Elliott dropped his hands for significant periods of time and dared Askarov to hit him. Askarov obliged, and it was the capper to an impressive first UFC victory for “Bullet.”

Featherweight up and comer Sodiq Yusuff showed off a well-rounded attack in winning a three-round unanimous decision over Andre Fili.

There was no feeling out process between the two, but in the midst of the hard shots thrown, it was Yusuff’s blows that were doing the most damage. Fili (20-7) responded with some grappling attempts, including two takedowns, but Yusuff didn’t stay grounded for long. Fili refused to back down when standing, though, and he rocked Yusuff briefly with under two minutes left before scoring another takedown. As the two rose, Yusuff locked in a kimura and nearly finished the fight with it, but Fili was able to survive.

Yusuff used a Fili kick to take the fight to the mat in the first minute of round two and the Nigeria native began to deliver hard strikes from the top position. Then it was a display of his grappling, as he controlled matters until the two rose with a minute left.

Fili got back on the board in the third as he worked from the southpaw stance and scored with a series of straight lefts while avoiding much of the incoming fire from Yusuff. A takedown at the end of the bout added to his scoring total, but all three judges ultimately scored it 29-28 for Yusuff, who improves to 11-1.

Veteran flyweight Roxanne Modafferi stunned previously unbeaten Maycee Barber as she scored a three-round unanimous decision victory over the highly-touted up and comer.

Modafferi landed a couple good right hands in the opening minute that led to a takedown, and the veteran went to work, keeping Barber grounded and doing just enough to keep the fight on the mat. Barber nearly caught her foe with a choke, but Modafferi escaped and got into the mount just before the end of the frame.

Modafferi put Barber on the deck with a jab early in round two and the fight was back on the mat, where the Colorado native grabbed her knee in pain. Ninety seconds in, Modafferi got into the mount and then cut Barber with an elbow, but “The Future” was able to scramble her way into the top position. Modafferi stayed busy from the bottom and reversed position, nearly locking in an arm triangle. Barber was poised under pressure as she looked for daylight, but it was another round in the books for “The Happy Warrior.”

Between rounds, the Octagonside physician examined Barber and told referee Jason Herzog that she had a partial ACL tear, but he cleared her to continue. It was evident, though, that each shot Modafferi landed was staggering her because Barber’s leg was compromised. In the second minute, the two were back on the mat. With three minutes left, Barber reversed position and assumed control, firing off elbows until Modafferi got free and was able to take over for the rest of the bout.

Surging lightweight Diego Ferreira likely earned his place in the top 15 after submitting former world champion Anthony Pettis in the second round to up his current winning streak to six.

Keeping the pressure on from the start, Ferreira took some shots from Pettis, but whenever he got his hands on the Milwaukee native, he was able to control the action. In the second, he took Pettis down early and got his back, and once he got his foe’s neck, a tap followed, with Ferreira getting the rear naked choke victory at 1:46 of the round.

Social Post
Brian Kelleher def. Ode Osbourne by submission (guillotine) at 2:45 of Round 1

Brian Kelleher’s first bout since December 2018 was a successful one, as he submitted newcomer Ode’ Osbourne in the opening round of their bantamweight matchup.

Fresh from the Contender Series, Milwaukee’s Osbourne landed a right hand out of a crouch to start the fight, but Kelleher got the fight to the mat moments later and bulled his foe to the fence. Osbourne fired off elbows from his back and Kelleher exchanged blows with him before locking in a tight guillotine. Moments later, Osbourne tapped, with the end coming 2:49 into the bout.

Social Post
Aleksei Oleinik def. Maurice Greene by submission (armbar) at 4:38 of Round 21

Aleksei Oleinik had to dig deep in heavyweight action against Maurice Greene, but the 42-year-old Russian ultimately got the win, submitting his foe in the second round.

A kick to the midsection by Greene put Oleinik down seconds into the fight, but a second kick moments later missed, allowing Oleinik to drag him to the mat. Now it was Oleinik’s world, but Greene used a pair of triangle attempts to get back to his feet. Oleinik put the fight right back down midway through the frame and he got the mount position. A choke followed, but Greene hung tough and made it out of the round.

The minute’s rest between rounds was a benefit for Greene, but Oleinik appeared to be tired after going all-in for the submission in the previous frame. But in the second minute, Oleinik was able to get the takedown, and after a grueling mat battle, “The Boa Constrictor” finally locked in the armbar that forced Greene to tap at 4:38 of round two.

Much of the first two rounds was fought in the clinch against the fence, Holm in charge for all but a few moments when Pennington was able to reverse position, and while the crowd wasn’t happy, it left Holm in the lead and Pennington needing a big finish in the third if she wanted to even the score with “The Preacher’s Daughter.” It wasn’t to be, though, as Holm continued to dominate in the clinch, allowing her to cruise to victory via scores of 29-28 and 30-27 twice.

He’s back. Returning to the Octagon for the first time since October 2018, Irish superstar Conor McGregor scored his first win since 2016, as he took less than a minute to stop Donald “Cowboy” Cerrone in a welterweight bout that headlined UFC 246 at T-Mobile Arena in Las Vegas.

A world champion at featherweight and lightweight, McGregor impressed immediately in his third bout at 170 pounds, as he fired off a shot at Cerrone at the outset. That left missed, but after the two tied up, a few shoulder strikes by the Dubliner drew blood from Cerrone’s nose and apparently stunned him because, moments later, a left kick to the head by McGregor put “Cowboy” in deep trouble. A couple punches then put Cerrone on the deck, and after a series of unanswered blows, referee Herb Dean stepped in and stopped the bout at the 40-second mark.