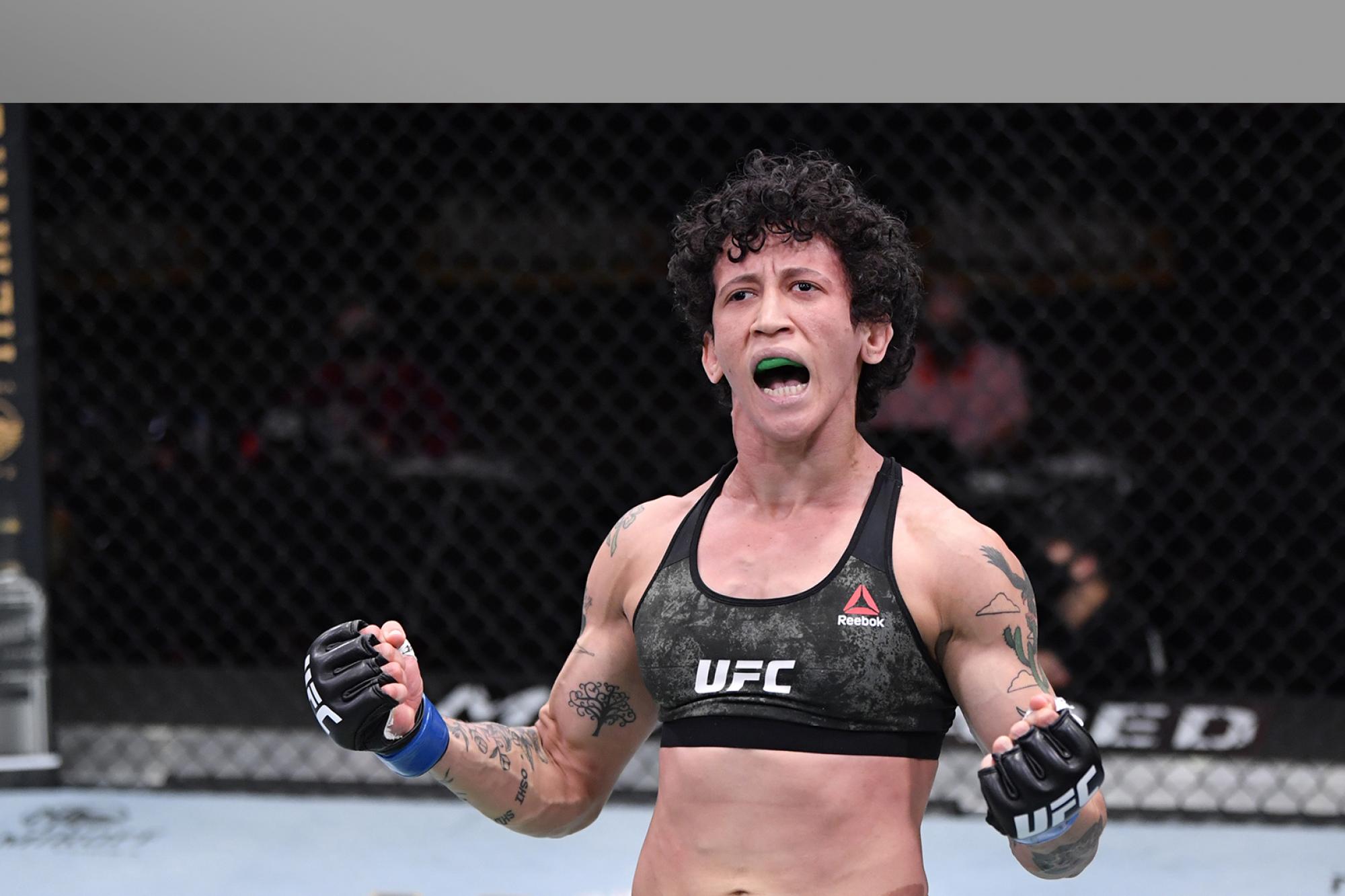 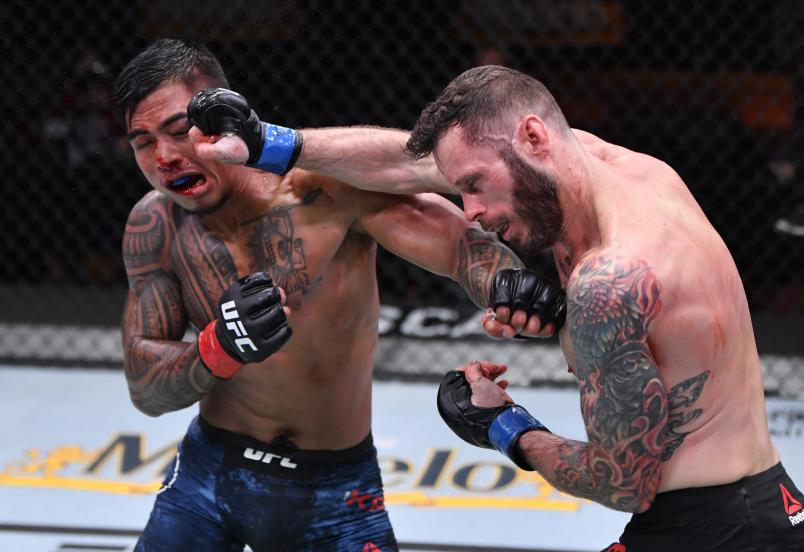 Tony Kelley and Kai Kamaka trade punches in their featherweight bout during the UFC 252 event at UFC APEX on August 15, 2020 in Las Vegas, Nevada. (Photo by Jeff Bottari/Zuffa LLC)

In the opening fight of UFC 252, Hawaii’s Kai Kamaka took home an entertaining and tough decision win over Tony Kelley.

Both men came out swinging early, with Kelley finding his range a little faster, but Kamaka soon found his counter shots, particularly left hooks to Kelley’s head as well as a good mix of body shots. A body shot is what looked to weaken Kelley late in the first round, and Kamaka took advantage, scoring a couple takedowns as well.

The second round featured a similar pace but, this time, Kelley seemed to be the one finding more success on the feet, particularly in the clinch with knees to Kamaka’s body and digging hooks to his head. Kamaka reasserted himself in the final frame, though, leaning on his wrestling to slow the pace down and grind the round out after Kelley went for a guillotine choke that ended with him with his back on the mat. An accidental groin strike paused the action for a bit, but after the pause in the action, the two featherweights went at it for the final 90 seconds.

In the end, Kamaka got the decision with 29-28 scorecards down the line and a win in his UFC debut

Performances of the Night
Daniel Pineda 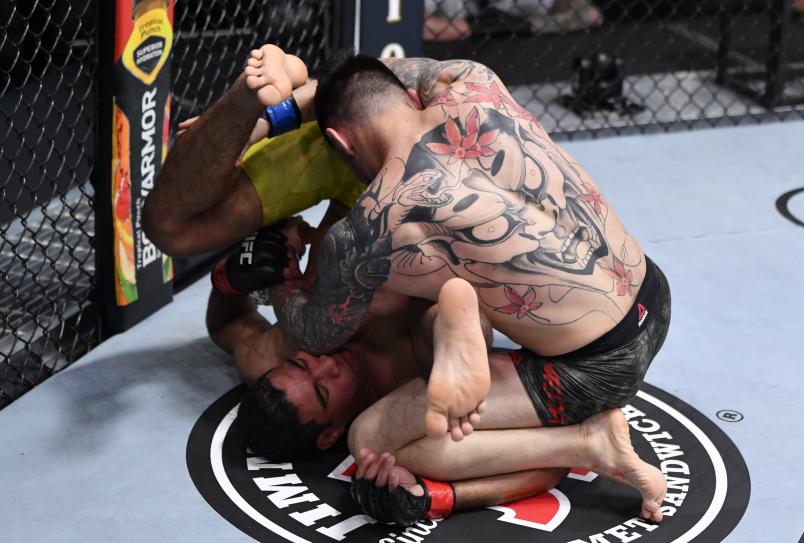 Daniel Pineda punches Herbert Burns of Brazil in their featherweight bout during the UFC 252 event at UFC APEX on August 15, 2020 in Las Vegas, Nevada. (Photo by Jeff Bottari/Zuffa LLC)

In his return to the UFC after six years away, Daniel Pineda made a statement in an impressive second-round TKO win over Herbert Burns, ending Burns’ undefeated run in the UFC.

Pineda pressed the action early, connecting with a big overhand right that forced a takedown attempt out of Burns. However, Pineda fought off the attempt well, and even though the fight eventually went to the ground, it was Pineda who found himself on top moments later, landing strong ground-and-pound to end the first frame. He had to weather a strong Burns attack early in the second round, but after surviving the onslaught, Pineda scrambled, found himself on top and got Burns stuck in the crucifix position. From there, he landed strike after strike until the referee stopped the bout before the end of the round. 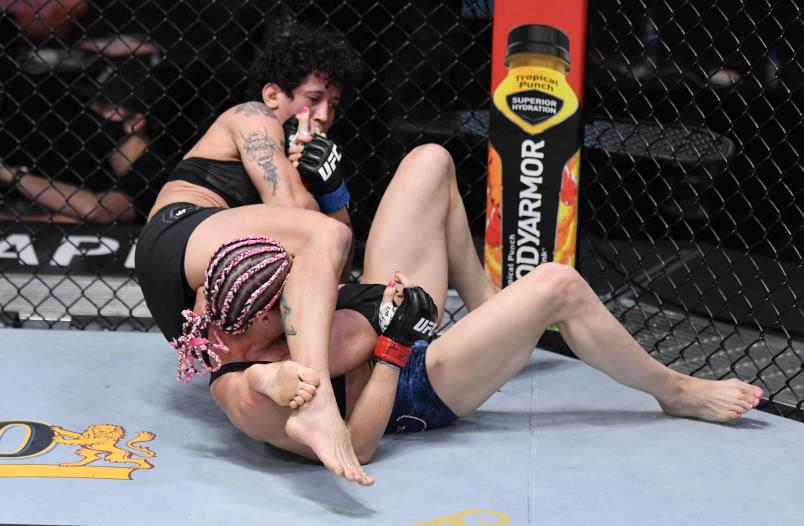 In this handout image provided by UFC, Virna Jandiroba (L) of Brazil secures an arm bar submission against Felice Herrig in their strawweight bout during the UFC 252 event at UFC APEX on August 15, 2020 in Las Vegas, Nevada. (Photo by Jeff Bottari/Zuffa L

In her toughest test yet, Brazilian strawweight Virna Jandiroba showed she is a real threat to the 115-pound division, submitting veteran Felice Herrig inside of two minutes.

Jandiroba shot for a takedown at the bout’s start, securing it without much problem. The jiu-jitsu ace sliced through Herrig’s defense on the way to full mount, locking up Herrig’s arm from there and getting the submission win and likely a place in the top 15.