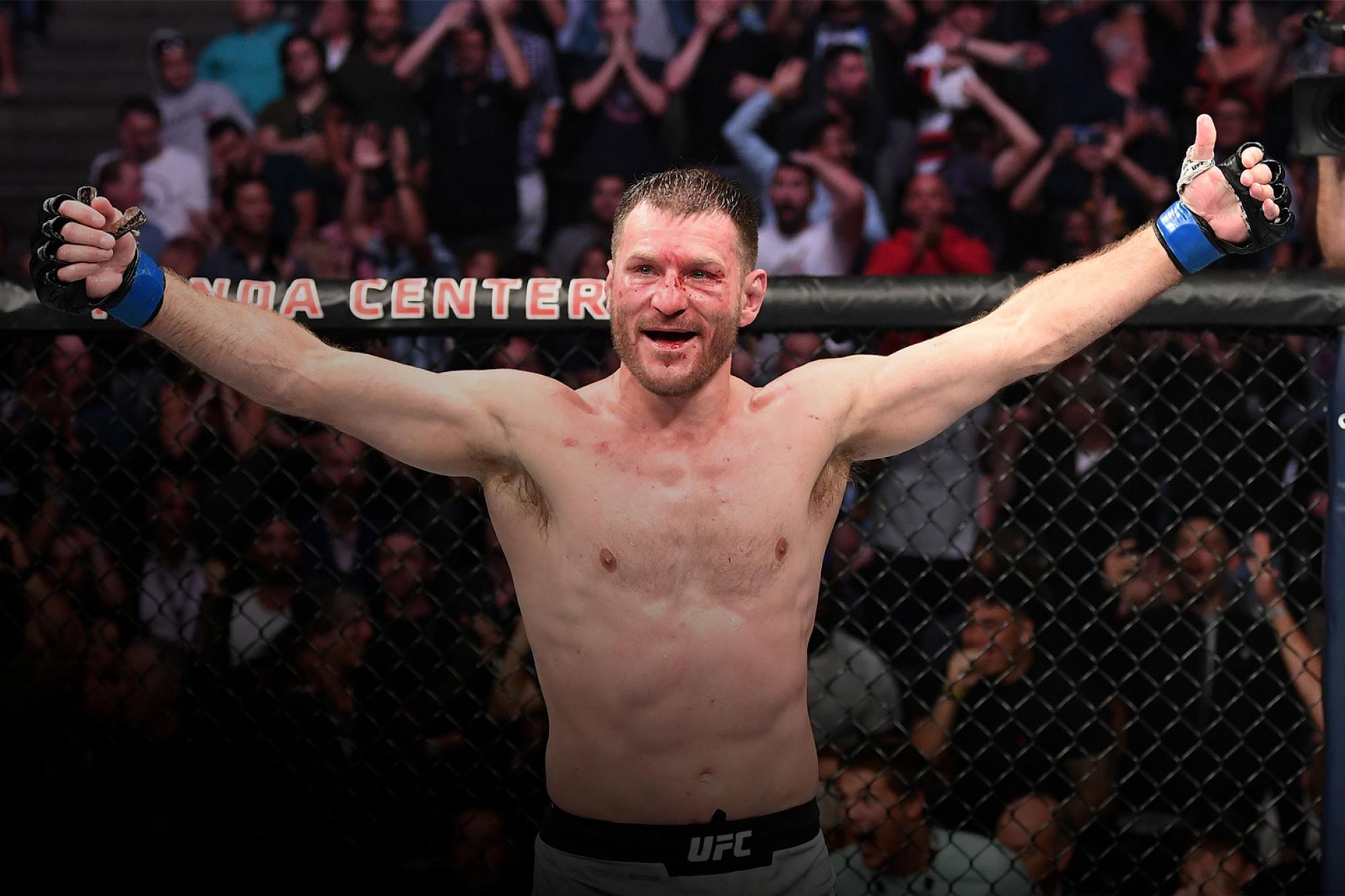 UFC 252 Where We Stand: Heavyweights

Ahead of one of the most anticipated bouts in UFC history, let's take a look at the broader scope of the heavyweight division before the belt is on the line
By Zac Pacleb, on Twitter: @ZacPacleb • Aug. 12, 2020

For about three years now, the epic showdowns between Stipe Miocic and Daniel Cormier defined the heavyweight division – though some would argue the two have held the division hostage, depending on who you ask. Regardless, the most-anticipated trilogy bout in recent memory goes down on August 15 inside the UFC Apex with legacies on the line.

The winner not only holds the heavyweight title but also the tag as “Best Heavyweight of His Generation,” and some would say “of all-time” That is especially in mind for Cormier, who makes his final walk to the Octagon on Saturday night. Miocic, on the other hand, hasn’t made any public announcements regarding his future, but if he were to defend his belt for a fourth time, not many would blame the Ohioan for walking away on top.

While Miocic and Cormier handled their business, the heavyweight division has seen its elite contenders jockey for position, so whether UFC 252 concludes with one or two retirements, there’s plenty of intriguing bouts ahead in the division’s immediate future.

With that in mind, it’s about as good a time as ever to put the division under the microscope to see what might be down the heavyweight road.

Outlook: Miocic has more or less reigned over the division for the last four years, and despite holding the record for most consecutive title defenses in heavyweight history, it feels like there’s a lot at stake for him in his third fight with Cormier. That could just be the hype of the moment, but it’s not a reach to say this trilogy bout is the most important heavyweight fight ever. That’s a credit to both fighters, but that said, regardless of the outcome, there’s plenty of fights left for Miocic after August 15. Francis Ngannou has gone on a tear worthy of a second shot at the title even if Miocic – who beat Ngannou in 2018 – still occupies that slot. Curtis Blaydes and Derrick Lewis have also built title shot-worthy resumes, probably in that order, so Miocic could very well continue to add to his legacy if he continues fighting.

Outlook: For Cormier, there is no outlook past Miocic. The former double-champ has long contemplated retirement, pushing it only to wrap up his business with Miocic. Win or lose, though, Cormier is undoubtedly one of the best to do it. He was the first man to hold and defend belts in two divisions simultaneously. His career is already historic, and yet it’s also fair to say he needs to beat Miocic to cement a strong case as the best heavyweight not only of his era, but of all-time. Granted, if his only career losses are to Jon Jones and Miocic, that’s nothing at which to scoff, but getting the better of Miocic in their trilogy certainly clears any questions regarding where he stands among the pack.

Outlook: While Cormier and Miocic have engaged in their three-year scuffle, no other fighter has distinguished themselves as more worthy of the next title shot than Francis Ngannou. Since his failed title bid in 2018 and subsequent underwhelming loss to Derrick Lewis, Ngannou has fought four times for a combined two minutes and 42 seconds, dispatching of Curtis Blaydes, Cain Velasquez, Junior Dos Santos and Jairzinho Rozenstruik without a hint of adversity. There might not be a more terrifying person or puncher on the roster, and he basically looms over whomever is in his way toward the belt. Few, if any, can match his power, explosiveness and sheer size, and those who can haven’t been able to absorb his attack long enough to find out. 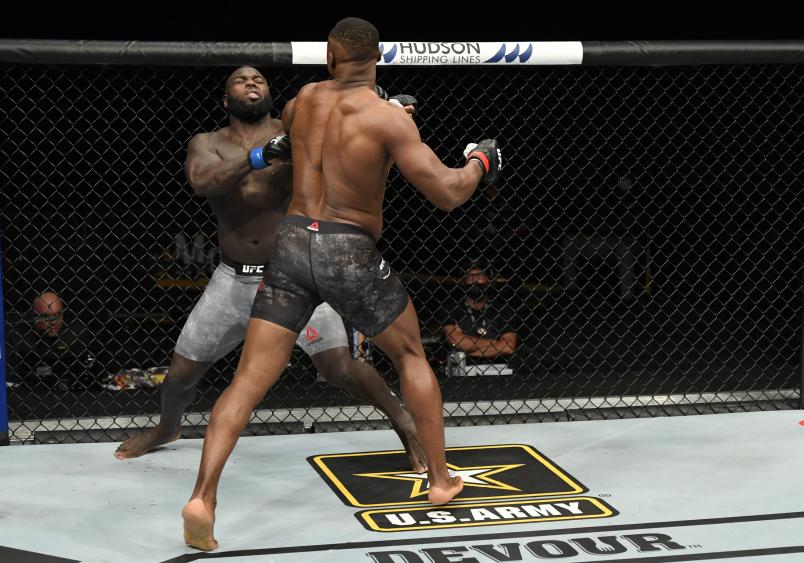 JACKSONVILLE, FLORIDA - MAY 09: Francis Ngannou of Cameroon punches Jairzinho Rozenstruik of Suriname in their heavyweight fight during the UFC 249 event at VyStar Veterans Memorial Arena on May 09, 2020 in Jacksonville, Florida. (Photo by Jeff Bottari/Zu
3) Curtis Blaydes

Outlook: Essentially, Curtis Blaydes’ record is 14 wins and two fights against Francis Ngannou. If the Cameroonian didn’t exist, Blaydes would undoubtedly be the consensus next contender for the belt. At 29 years old, Blaydes is young for the division, so he has some longevity that others at the top don’t, but it’s not time he wants to waste. Blaydes’ game plan doesn’t vary much. He wants to wrestle the hell out of his foe and, from there, he’s going to control his opponent while landing vicious ground-and-pound. A hypothetical bout against Cormier is fun to think about, but in reality, there’s still a few unexplored matchups that make sense for Blaydes while he bides his time for a title shot, most prominently Derrick Lewis, who entertained the idea after his last bout. Blaydes’ standup improves with each fight, but as he showed in his most recent bout against Alexander Volkov, he can keep the fight in his world for the better part of a full 25 minutes if he so chooses.

Outlook: The heavyweight division’s knockout king secured his 15th win in the Octagon just a few days ago over Aleksei Oleinik, and yet it’s not otherworldly to say Lewis might be in the best form of his career. Having finally dealt with back and knee injuries that hampered him, “The Black Beast” is looking as explosive and fit as ever. Everyone knows a fight with Lewis means plenty of “swangin’ and bangin’,” but the one-time heavyweight title challenger is just as eager to throw in a flying knee or head kick before launching that patented overhand shot. He expressed interest in fighting Curtis Blaydes, which seems like an intriguing stylistic matchup between the two top 5 fighters. Outside of that – and I understand this seems slightly insane to suggest given their first fight – a rematch with Francis Ngannou almost seems inevitable given how devastating both have looked since their infamous matchup at UFC 226.

Outlook: It’s pretty wild to realize “Cigano” is only 36 years old considering he made his UFC debut in 2008 with a knockout win over Fabricio Werdum. Although the Brazilian lost his last two fights, those came against the surging Curtis Blaydes and Francis Ngannou – not an indictment of Dos Santos at all. He has a chance to dig his heels in his top 5 status, though, when he takes on Jairzinho Rozenstruik. Stylistically, this bout is intriguing in that “Bigi Boy” is the most technically proficient power-puncher Dos Santos has faced in quite some time. JDS still packs a heck of a punch while also holding one of the more diverse standup attacks in the division. The bout is crucial for him if he hopes to get on the inside track to regain the belt he held in 2013, and as we’ve seen for more than a decade, few can do it like Dos Santos.

Outlook: A near-cliché statement you hear about the heavyweight division is how it always needs new faces. That argument can be made about any weight class, but because of the longevity the elite contenders can have without the stress of cutting weight, it is commonplace for the best to hang around a few years longer. That said, you never know who is going to catapult themselves up the ladder like Jairzinho Rozenstruik did in 2019. He essentially came out of nowhere before flying too close to the sun in a quick loss against Francis Ngannou, but now he gets a real litmus test against Junior Dos Santos. Similarly, but more slowly, Augusto Sakai is close to throwing his hat in the ring as worthy of a top-tier matchup. The 29-year-old Brazilian is blemish-free in four Octagon appearances, most recently toughing out a split decision win over the always-tough Blagoy Ivanov. He is probably primed for a big-name opponent sooner rather than later. Speaking of big names, Alistair Overeem has been one of those for what seems like eons. The 40-year-old Dutchman continues to prove he has plenty left in the tank, winning three of his last four, all by stoppage. But it’s a disservice to “The Demolition Man” to think of him as a sort of gatekeeper or steppingstone for up-and-coming heavyweights, as there are few on the roster with as historic of a pedigree as Overeem.