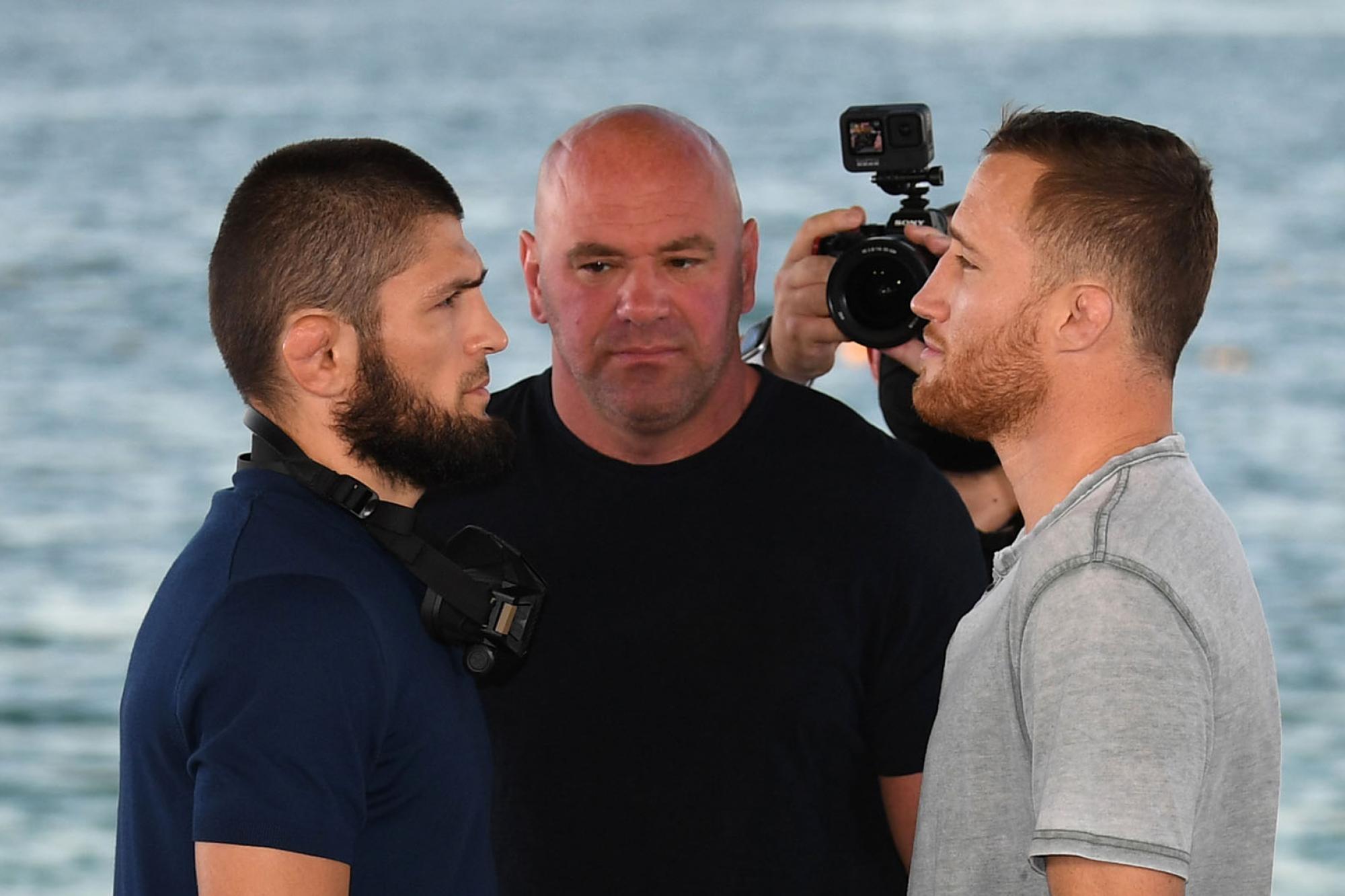 All The Big Winners From Flash Forum On UFC Fight Island
By Thomas Gerbasi, on Twitter: @TGerbasi • Oct. 24, 2020

UFC wraps up its second run on UFC FIGHT ISLAND with one of the most anticipated bouts of the year as UFC lightweight champion Khabib Nurmagomedov and interim champion Justin Gaethje battle to unify the belts. In the co-main event, former middleweight champion and No. 1 ranked Robert Whittaker takes on No. 3 Jared Cannonier in a pivotal bout with title implications.

Undefeated champion Nurmagomedov (28-0, fighting out of Dagestan, Russia) looks to put on another dominant performance and once again prove he is the best lightweight on the planet. Nurmagomedov is currently tied for the longest active win streak in the UFC with an impressive 12 victories in a row, which includes finishes over former champion Conor McGregor and former interim champion Dustin Poirier. He now seeks to extend his streak to 13 with a statement performance over Gaethje and make his case as the No. 1 pound-for-pound fighter in the world.

Gaethje (22-2, fighting out of Arvada, Colo.) has become a fan favorite for the relentless and entertaining fight style that has earned him nine UFC post-fight bonuses in just seven fights. A proven finisher with a remarkable 20 of his 22 wins coming by stoppage, Gaethje rose through the lightweight ranks with knockouts over Edson Barboza, Donald Cerrone and Tony Ferguson. He now looks to realize his ultimate goal of attaining the undisputed UFC lightweight championship by becoming the first person to defeat Nurmagomedov.

ESPN+ is available on ESPN.com, ESPNplus.com and the ESPN App for mobile connected TV devices. To subscribe, click here.

Spanish up and comer Joel Alvarez scored his third consecutive win in the lightweight opener, submitting Alexander Yakovlev in the first round.

After taking a series of leg kicks from Alvarez, Yakovlev shot in for a takedown, only to get caught in a guillotine choke momentarily. Once he pulled loose, the Russian went to work, but Alvarez stayed busy from his back, locking in the armbar that forced a tap out at 3:00 of round one.

Official Result: Joel Alvarez def. Alexander Yakovlev by submission (armbar) at 3:00 of Round 1

Jojua had some success early with her right hand, but Maverick adjusted and attacked with a variety of strikes, keeping the pressure on throughout. Jojua didn’t back down, but an elbow to the nose opened up a nasty cut that the corner wasn’t able to close between rounds, prompting a doctor’s stoppage at the 5:00 mark of round one.

Official Result: Miranda Maverick def. Liana Jojua by TKO at 5:00 of Round 1

Light heavyweights Da-un Jung and Sam Alvey delivered an entertaining three-round striking battle, with the judges rendering a draw verdict when it was all over.

Alvey (33-14-1, 1 NC) was busier than he has been in recent fights, allowing him to have several good moments in the first two rounds, including a hard left hand with two minutes left in the opening frame that jarred Jung briefly. Jung’s forward march remained steady throughout, and while he had his moments, he paid for his aggressiveness as Alvey stayed busy and landed plenty of counters.

Thirty seconds into the final round, Jung (13-2-1) dropped Alvey with a right elbow, but the Californian got back to his feet quickly. Jung kept the pressure on his now bloodied foe, yet Alvey landed some uppercuts that let his foe know that he wasn’t done yet. Midway through the round, though, Jung rocked Alvey with another elbow. After a spell in the clinch, a third thudding elbow landed, but Alvey took it and made it to the final horn.

Many wondered if Shavkat Rakhmonov was biting off more than he could chew by taking on Brazilian veteran Alex Oliveira in his first UFC bout. He wasn’t, as the Kazakhstan native submitted “Cowboy” in the first round of their welterweight bout.

Oliveira was Oliveira in the early going of the fight, but after he caught a knee to the body with  a little over three minutes to go in the opening round, it changed his strategy as he attempted to stay close with his foe against the fence. That was no problem for Rakhmonov, who locked in the guillotine choke that ended matters at 4:40 of round one.

Top bantamweight prospects Casey Kenney and Nathaniel Wood battled it out at a 140-pound catchweight for three action-packed rounds, with Kenney earning his second win of the month via unanimous decision.

The bout was fought at a frenetic pace in the first round, both fighters throwing everything in their arsenals at each other. Kenney had the edge in the opening frame as he landed the harder and more telling punches and kicks, but Wood evened the score in the second as the Arizonan began to tire and the Brit stayed busy offensively while tightening up his defense.

Kenney brought some of his grappling into the mix in the final frame, which added to his point total, and while the action level stayed high, it was the American who edged it out.

MORE: How To Watch UFC 254 | Official Scorecards | Weigh In Results | Fight By Fight Preview | Dana White: Lookin’ FWD to a Fight – Return to Fight Island Ep. 2 | Where We Stand: Lightweights | Fighters You Should Know | Khamzat Chimaev Sit-Down With Dan Hardy

Tuivasa looked like a different fighter for much of the first round, as he stayed busy and handled himself well in the clinch, avoiding any trouble from his much-taller foe. But in the closing seconds, the old “Bam Bam” resurfaced, as he caught Struve, sensed the Netherlands native was hurt, and he finished matters with a series of hard shots. The official time of referee Jason Herzog’s stoppage was 4:59 of round one.

Official Result: Tai Tuivasa def. Stefan Struve by KO at 4:59 of Round 1

There was no controversy in the light heavyweight rematch between Magomed Ankalaev and Ion Cutelaba, with Ankalaev opening the main card with a definitive first-round knockout victory to move to 2-0 against his rival.

In stark contrast to their first bout in February, the fight began at a downright sedate pace, with Cutelaba chasing and Ankalev waiting to strike. With 1:10 left, Ankalaev scored a flash knockdown of the Moldovan, and that was the beginning of the end, as the Russian nailed Cutelaba with a right-left combination that dropped him hard to the canvas. A follow-up barrage of ground strikes put an end to matters, with referee Anders Ohlsson stepped in at 4:19 of the first round.

Official Result: Magomed Ankalaev def. Ion Cutelaba by KO at 4:19 of Round 1

Veteran flyweight contender Lauren Murphy made the most of her first pay-per-view main card spot, as she submitted Octagon newcomer Liliya Shakirova in the second round.

Uzbekistan’s Shakirova fought well throughout the bout, but Murphy was patient and a step ahead, and after working her striking in the opening round, she took the fight to the mat in the second. And once on the mat, she took Shakirova’s back and sunk in a rear naked choke, with the tap out coming at 3:31 of round two.

With the win, the No. 5-ranked Murphy, who has won four straight, moves to 14-4. Shakirova who replaced Cynthia Calvillo, falls to 8-2.

It was a long trip to the Octagon for Phillip Hawes, but once he got these, he needed less than 30 seconds to stop previously unbeaten Jacob Malkoun.

Hawes went on the offensive immediately, and once he landed a right hand on the Aussie, it was game over, with a combination of punches sending Malkoun down and out, with referee Jason Herzog halting the bout at 18 seconds of the opening round.

Official Result: Phillip Hawes def. Jacob Malkoun by KO at 4:19 of Round 1

In a clash of heavyweight contenders, Alexander Volkov was in top form as he stopped Walk Harris in the second round.

With the heavyweights slinging leather, it felt like any blow landed could be a finisher. Harris got in plenty of shots in the first round, it was Volkov who did the better work, nearly stopping the fight with a left hand that rocked Harris before the Alabama native fired back and got back in the fray.

In the second, Harris got nailed with a kick to the body that provoked a visible reaction from “The Big Ticket,” and as he staggered backward, Volkov unloaded with his punches, and that brought in referee Lucasz Bosacki to halt the bout at the 1:15 mark of round two.

Official Result: Alexander Volkov def. Walt Harris by TKO at 1:15 of Round 2

Both fighters had positive moments in an interesting first round, Whittaker using his movement while mixing up his attacks, while Cannonier chopped at his foe’s leg with frightening efficiency.

Cannonier stuck to the game plan in the second, as he battered Whittaker’s leg, but the former champion largely controlled the action with a stiff jab and the occasional right hand, setting the stage for a pivotal third round.

Things went south quickly for Cannonier in the third when a combination capped off by a kick rocked the Arizonan, who was soon on the deck with Whittaker seeking a finish. With a little less than three minutes left, the battered Cannonier rose to his feet and tried to turn things around, and he nearly did when he rocked Whittaker with less than a minute to go. Whittaker smartly sought to grapple with his foe, allowing him to make it to the end of the bout.

After a brutal year that saw him lose his father and see a high-profile fight scrapped by the COVID-19 pandemic, Khabib Nurmagomedov could finally exhale, as the UFC lightweight champion successfully defended his title with a second-round submission of Justin Gaethje.

But his victory in the UFC 254 main event on Fight Island in Abu Dhabi, one which lifted his perfect record to 29-0, was followed by a shocking announcement, as he announced his retirement at the age of 32.

“Today I want to say it was my last fight,” said Nurmagomedov, whose father Abdulmanap passed away in July. “In no way am I gonna come here without my father. After what happened with my father, when UFC called me about Justin, I talked with my mother for three days. She didn’t want me to go fight without my father, but I promised her it’s gonna be my last fight. And if I give my word, I have to follow this.”

After a brief feeling-out process, a fight broke out, with Numagomedov looking to close the distance while Gaethje landed some solid shots before getting out of grappling range. Nurmagomedov kept the pressure on, landing knees, kicks and punches. With a little over a minute to go, Gaethje scored with a hard combination, but moments later, Nurmagomedov had his takedown with 40 seconds left. The champion quickly moved into the mount position and almost caught his foe’s arm, but the horn intervened.

Gaethje focused on kicking Nurmagomedov’s leg early in round two, but Nurmagomedov responded with a fast takedown and an even faster move to the mount, where he locked in the triangle choke that ended the bout at 1:34 of the second stanza.

It was the perfect end to a perfect career for “The Eagle.”

With the win, Nurmagomedov retires with a record of 29-0. Gaethje falls to 22-3.