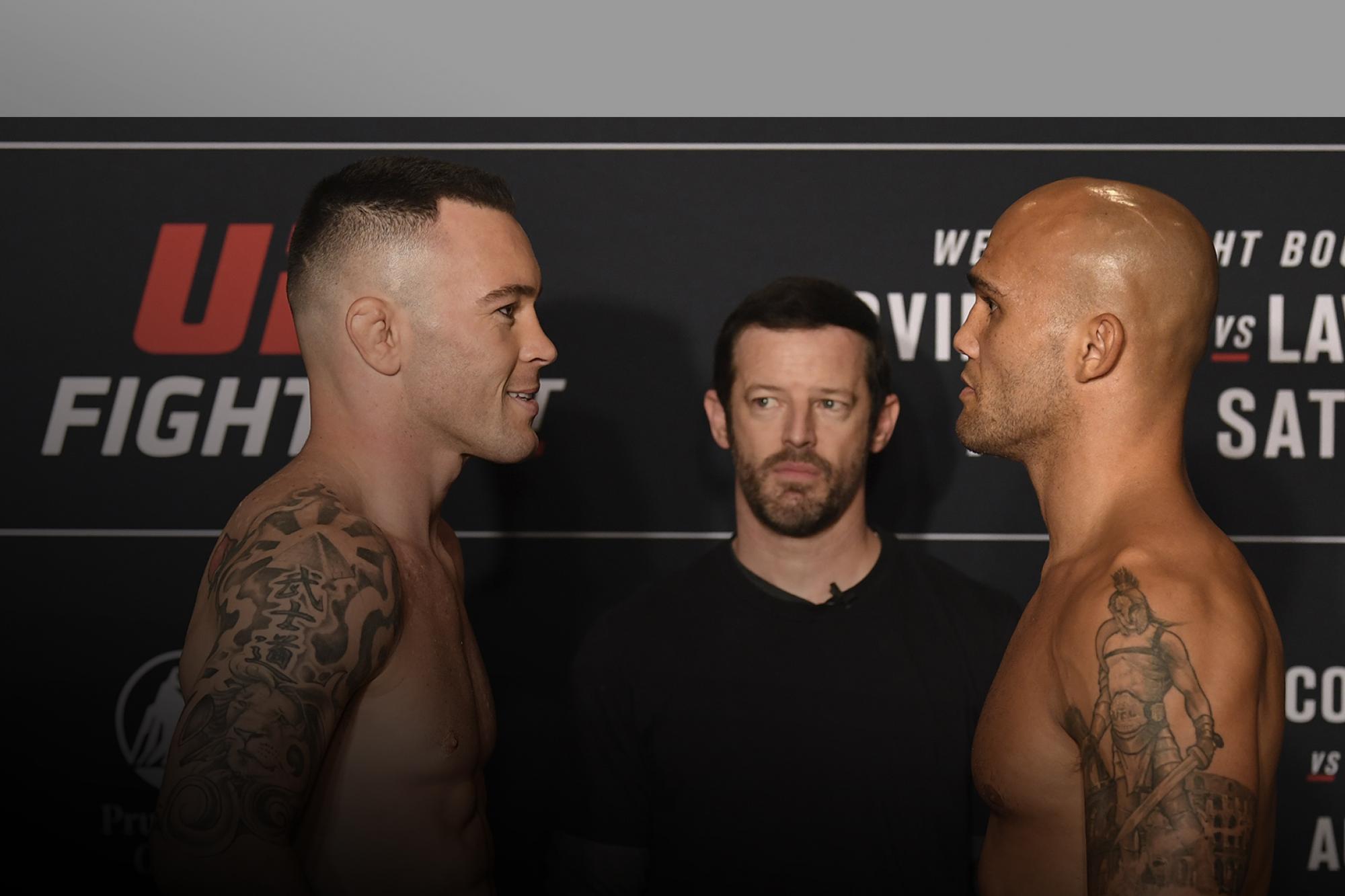 After a largely tactical first round edged by the busier Granger, things got closer in the second, but both fighters were able to land some significant shots while keeping the fight standing. Granger stayed a step ahead of her foe in the final frame, though, with a late surge putting a cap on the victory.

Social Post
Claudio Silva def Cole Williams via Submission due to a Rear Naked Choke at 2:35 in Round 1

Brazilian welterweight standout Claudio Silva extended his winning streak to 14, as he submitted Octagon newcomer Cole Williams in the first round.

Silva was all business with the late replacement foe, taking the fight to the mat in the second minute. From there, he softened up his foe with strikes as he took his back, and soon, the rear naked choke was in and Williams was forced to tap out at the 2:35 mark.

With the win, Silva moves to 14-1. Wisconsin’s Williams, who replaced Ramazan Emeev, falls to 11-2.

Social Post
Lauren Murphy def Mara Romero Borella by TKO at 1:46 in Round 3

In her first start since June 2018, flyweight contender Lauren Murphy made quite the return, stopping Mara Romero Borella in the third round.

After taking some time to deal with Borella’s leg kicks and speed advantage, Murphy began to get into a groove in the first round, and she landed several hard counters that got the Italian’s attention. There was more of the same in the second, and while Borella got a takedown with 2:50 remaining, once standing, Murphy was able to take control in the clinch against the fence.

Early in the third, Murphy rattled Borella with a right uppercut, and after trying to clear her head, Borella looked for a takedown but instead ate a left knee to the head that dropped her hard to the mat. A follow-up barrage of strikes ended the bout, with referee Lim Kerrigan stepping in at 1:46 of the final round.

Social Post
Matt Schnell def Jordan Espinosa via Submission due to a Triange Choke at 1:23 in Round 1

Louisiana’s Matt Schnell won his fourth straight in rapid-fire fashion, submitting Jordan Espinosa in the first round of their clash of flyweight contenders.

As the fight went to the mat in the early going, Schnell went to work for a submission, and after a guillotine choke came up empty, he moved to a triangle choke, and that was the one that forced Espinosa to tap out. The official time of the finish was 1:23.

Social Post
Antonina Shevchenko def Lucie Pudilova via Submission due to a Rear Naked Choke at 1:20 in Round 2

Antonina Shevchenko rebounded from the first loss of her career in style, submitting Lucie Pudilova in the second round of an exciting flyweight battle.

Shevchenko, who dropped a decision to Roxanne Modafferi in April, dominated the early stages of the fight thanks to solid clinch work that included several knees, but with less than 90 seconds left, Pudilova bounced back with two flush elbows on the break, the second of which cut Shevchenko over the left eye. Pudilova took the bout to the mat and appeared to be taking over, only to get caught in a tight armbar. Remarkably, Pudilova escaped, and the crowd was roaring by the time the horn sounded.

Pudilova took her chances with her ground attack again to start the second frame, but after slamming Shevchenko to the mat, the Kyrgyzstan native took the back and locked in the rear naked choke, putting an end to the bout at 1:20 of round two.

With the win, Shevchenko moves to 8-1. The Czech Republic’s Pudilova falls to 8-5.

Green Brook, New Jersey’s Mickey Gall got his home state fans cheering, as he returned to the win column with a close, but unanimous, decision over Poland’s Salim Touahri.

Gall and Touahri battled it out on fairly even terms on the feet throughout the first round, but when it came to the grappling exchanges against the fence or on the mat, it was all Gall, who nearly opened his foe up for a choke in the closing seconds of the frame.

Continuing to look comfortable on the feet in round two, Gall kept it standing until he sought out a takedown with two minutes left. But as the two tumbled to the canvas, Touahri landed on top and took advantage by landing several ground strikes before the two rose. Looking to close strong, Gall landed some elbows at close range, but as the fight went back to the mat, it was Touahri again on top.

Both 170-pounders continued to fight hard down the stretch of a tough fight, but it may have been Gall’s consistent aggression that allowed him to take the decision via three scores of 29-28.

Two point deductions cost Serbia’s Darko Stosic, as he dropped a three-round unanimous decision to light heavyweight prospect Kennedy Nzechukwu that he would have won if not for wayward kicks.

Stosic’s thudding kicks marked up Nzechukwu’s leg quickly, and as the Dallas product let his foe get closer, Stosic finished up the round with a series of close-range hooks to the head.

Going back to his kicks to start round two, the first one Stosic threw strayed low, drawing a brief halt to the action. Once the fight resumed, Nzechukwu got more aggressive in an attempt to even the fight up, and his task was successful, as he used kicks to the body and hard jabs up top until Stocic scored a takedown midway through the frame. Nzechukwu jumped up immediately and went back to work, but another groin strike cost Stosic a point and brought a second halt to the fight.

Showing a sense of urgency to open round three, Stosic was busy with his strikes and he threw in a second takedown. A third groin kick sent Nzechukwu to the canvas, though, and after another point deduction and a visit from the doctor, the bout resumed. Stosic got the bout to the canvas three more times, only to see Nzechukwu get right back to his feet each time, sending the bout to the scorecards.

A right hand by Holtzman knocked Ma down a little more than 90 seconds into the fight, and while the “Maestro” recovered quickly, his left eye rapidly swelled up and Holtzman was able to take over from the top position on the mat. The bout went back to the feet with 30 seconds left, and Holtzman maintained control, capping off a solid opening round.

After some even standup exchanges, Ma got a takedown in the second minute of round two, but Holtzman didn’t stick around long. More exchanges followed, and midway through the frame, it was Ma scoring a flash knockdown. Holtzman took a few moments to clear his head and then it was back into the fray, with each fighter landing flush shots. In the final minute, Holtzman scored a takedown and delivered some hard strikes before the horn sounded.

Yet before the third round could commence, the fight was waved off by the Octagonside physician due to the injury to Ma’s eye, pushing Holtzman to four wins in his last five bouts.

Social Post
Gerald Meerschaert def Trevin Giles by Submission due to a Guillotine Choke at 1:49 in Round 3

Midwest submission king Gerald Meerschaert earned his 21st victory on the ground by finishing Trevin Giles in the third round of their middleweight bout.

Giles scored the takedown less than a minute into the fight, but Meerschaert swept his way into the mount and began to implement his ground game. After a spell with his back on the canvas, Giles got a sweep of his own that put him in control on the mat, and he stayed there until the horn.

The first half of the second saw Giles again keeping Meerschaert grounded, but in the late stages of the frame, “GM3” reversed position and nullified Giles’ offensive attack, leaving the judges with an interesting call to make.

A left kick to the head by Meerschaert landed with a thud early in round three, but Giles took it well and went back to grappling. It was Meerschaert getting the takedown this time, though, and it was a guillotine choke that ended matters, with the end coming at 1:49 of the

Social Post
Nasrat Haqparast def Joaquim Silva by KO at :36 in Round 2

Lightweight up and comer Nasrat Haqparast earned his third UFC win and first stoppage in the Octagon, halting Brazil’s Joaquim Silva in the second round.

Silva was the aggressor from the start, and though busier than Haqparast, it was clear that the German’s counters were making their mark in the first round. In the second, though, it was Haqparast leading with the overhand left that dropped Silva to the mat. A few follow-up strikes later and referee Keith Peterson was stopping the bout at the :36 mark of round two.

Social Post
Jim Miller def Clay Guida by Technical Submission due to a Guillotine Choke at :58 in Round 1

It took years for lightweight veterans Jim Miller and Clay Guida to finally meet in the Octagon, yet once they did Saturday afternoon, Miller didn’t want to stick around long. That was just fine with the fans in his native New Jersey, as Miller took less than a minute to submit Guida in the UFC Newark co-main event at Prudential Center.

The action was fast and furious…but quick. And after Miller got rocked with a right hand by Guida, Miller came right back by rocking Guida with a left, and as the fight went to the mat, it was the Sparta product locking in a deadly guillotine choke that ended matters at :58 of round one.

There may be no such thing as a perfect fight, but Colby Covington came close in the UFC Newark main event at Prudential Center on Saturday, as he mixed striking, grappling and a relentless pace to shut out former welterweight champion Robbie Lawler over five rounds.

A wild exchange opened the fight, with neither Covington getting a takedown or Lawler landing a knockout blow. Covington did subsequently lock up with Lawler, eventually getting “Ruthless” down to the mat in the second minute. Lawler drilled Covington with an elbow as he rose, but Covington wasn’t going anywhere, and with three minutes left, he dragged Lawler to the mat and looked for a choke. But with a minute left, Lawler exploded back to his feet and got some daylight. Covington scored another takedown, again looking for a choke before throwing a big flurry as the two stood just before the horn.

Covington continued to swarm Lawler with his takedowns and clinch game in round two, and “Chaos” was even getting the best of the striking game when the two stood. That didn’t mean Lawler wasn’t still dangerous, but at this stage of the fight, the former champ was getting dominated everywhere.

Lawler had some moments in the third, briefly stunning Covington with a right hand as he stayed on his feet for much of the round, but the work rate of the former interim champ remained suffocating, and nothing let up from the Covington side in the fourth and fifth frames, as Lawler was befuddled by the constant stream of strikes coming his way, unable to land the punch that would turn the fight around, much to the chagrin of the fans in attendance who chanted for their favorite throughout the five-rounder.