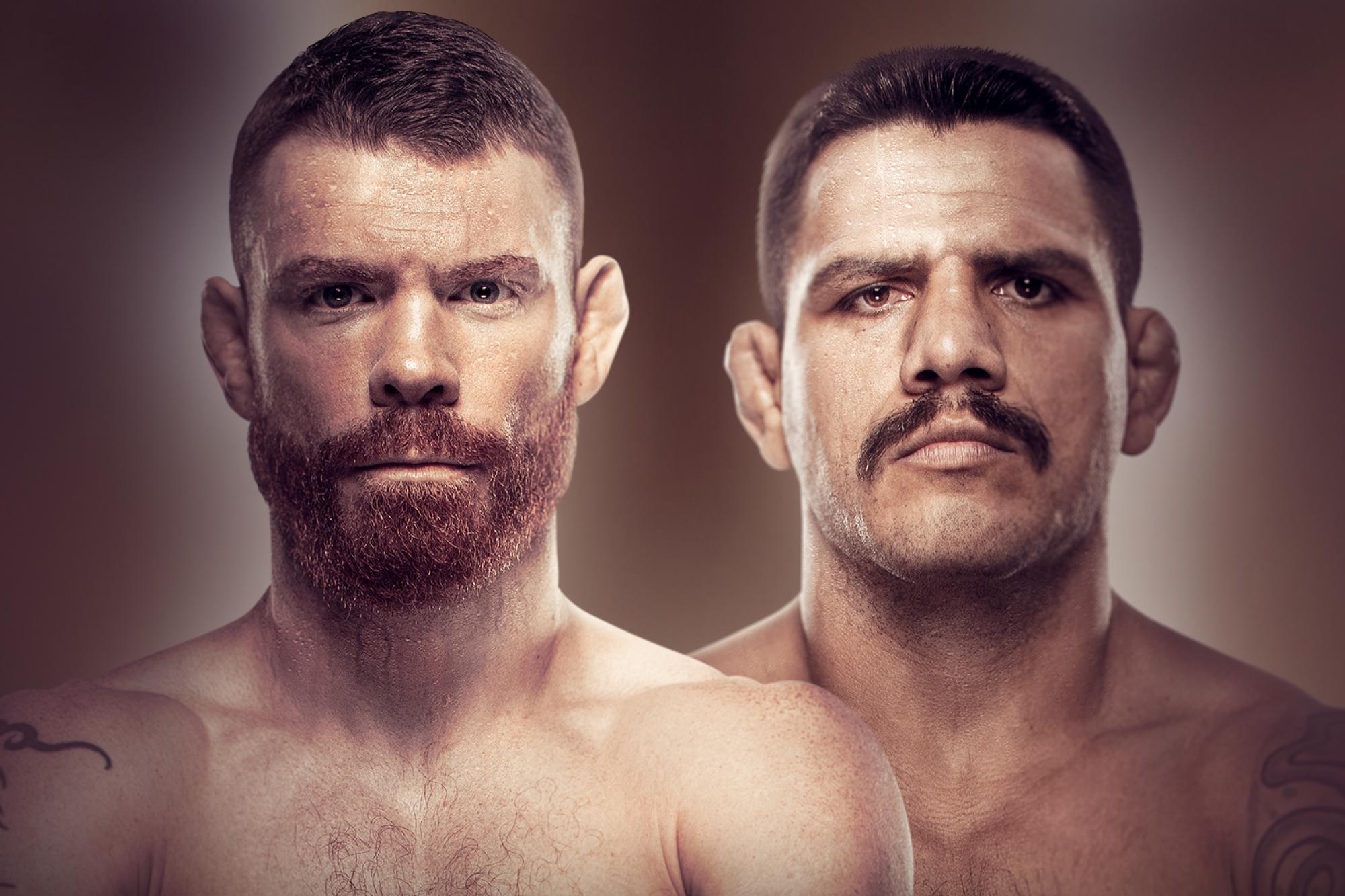 UFC continues its run of events in Las Vegas with a pivotal lightweight main event as surging No. 7 ranked Paul Felder steps into the Octagon on five days notice and welcomes No. 12 ranked welterweight Rafael Dos Anjos back to the weight class he once ruled as champion. In the co-main event, explosive welterweight strikers clash as Abdul Razak Al-Hassan meets Khaos Williams. Also on the main card, 21-year olds Kay Hansen and Dana White's Contender Series alum Cory McKenna faceoff in an exciting strawweight bout.

What time is UFC Fight Night: Felder vs Dos Anjos?

Mayes and Martinez pecked and poked at each other primarily with kicks for much of the first round, with Mayes extending his early lead with a takedown and some ground-and-pound in the final minute of the frame.

After several first-round warnings from referee Chris Tognoni for Mayes to keep his fists closed, Mayes got another stern one to start round two, but once the action resumed, he began to tag his foe with knees and punches at an accelerated pace. Martinez wasn’t going anywhere, but he was in a hole on the scorecards.

In the third, Martinez kept pressing, nearly locking in a choke, and when that didn’t work, he went back to his strikes, getting in some good shots on Mayes, but the night belonged to “Lord Kong.”

Texas’ Alex Morono got back in the win column in welterweight action, scoring a unanimous decision victory over Rhys McKee.

McKee was aggressive throughout the first round, but his forward march was greeted by several hard punches from Morono, who was particularly on target with his right hand throughout as he clearly won the opening stanza.

A knee just before the midway point of round two rattled McKee, and then it was back to the hands for Morono, who left his mark on McKee’s face. The Northern Ireland native was game to the core, though, as he kept pressing, having a better round than he did in the first.

McKee landed a couple good body shots early in round three, promoting a takedown from Morono, who caught his breath and got back to his feet. After a break in the action as McKee’s mouthpiece fell through the Octagon fence and under the cage, forcing his corner to grab a spare one from the locker room, the 170-pounders went back to work for the final two minutes, Morono scoring another takedown that secured his victory on the scorecards.

In a meeting of bantamweights, Tony Gravely survived some rocky moments in the third round to defeat Brazil’s Geraldo de Freitas via split decision.

De Freitas opened the fight throwing heat, but Gravely scored a takedown, landing in side control. The two soon rose, but it was Gravely landing another takedown. This time, de Freitas nearly locked up an armbar, only to lose it courtesy of a slam by Gravely, whose grappling work served him well in the first five minutes.

In the second, the two 135-pounders traded strikes and takedowns, Gravely able to keep the action grounded longer. With a little over a minute left, de Freitas was back on his feet and firing off strikes as Gravely sought – and got - another takedown.

In the third, de Freitas landed with some hard punches that rattled Gravely, but when the scores were tallied, it was the Virginia product leaving with the victory.

The strawweight division has a new fighter to watch, as Japan’s Kanako Murata shut out veteran Randa Markos to secure an impressive Octagon debut.

Murata had a dominant first round thanks to her grappling and ground work, both of which left Markos looking for answers in any way possible, and it was more of the same in the second, as Murata’s world-class wrestling was keeping Markos from getting any consistent offense going.

In the third, Murata came close to a finish with a D’Arce choke, but Markos hung tough and got free. The Canadian wasn’t able to turn things around before the final horn, though, as Murata locked up the shutout win.

McKenna had success with her striking through most of the first round, with her 1-2s landing repeatedly. In the closing stages of the frame, though, it was Hansen roaring back with a guillotine choke attempt, a couple hard knees and a takedown. And though Hansen took her opponent’s back late, McKenna landed several punches to end the round.

Hansen’s knees and body kicks were strong weapons in round two, and with a little over two minutes left, she scored a takedown and immediately took McKenna’s back. She transitioned into an armbar attempt, but McKenna pulled free and found herself in the top position where she stayed until the horn sounded.

Hansen scored her second takedown of the fight in the second minute of the final round, and she looked for a finish with an arm triangle choke, but it was McKenna reversing position in the final minute, allowing her to finish strong with some ground strikes.

Two weeks after a solid win over Jack Marshman, Sean Strickland was back and even more impressive as he stopped Brendan Allen in the second round of a 195-pound catchweight bout.

The combatants traded strikes in the early going before Strickland scored a takedown a minute into the fight. Allen took some ground strikes on his way back to his feet, Strickland staying locked on as the two battled against the fence for a spell. Once separated, there were some good striking exchanges with Strickland landing a higher volume of shots while Allen scored with a hard left in return.

Official Result: Sean Strickland def. Brendan Allen by TKO at 1:32 of Round 2

Granger had success on the feet early on before a Yoder takedown with 3:20 to go in the first round. Granger scrambled out of trouble and landed strikes from the top position, but Yoder nearly caught her in a triangle choke late in the frame.

Yoder controlled much of round two on the ground, even though she didn’t have Granger in any serious trouble, but in the third, the “SpiderMonkey” made a concerted effort to finish on the ground, as she used her strikes to set up submission attempts, nearly ending matters with a rear naked choke before the final horn intervened.

Khaos Williams talks about his knockout win at UFC Vegas 14.

The chaos continued in the UFC Fight Night co-main event, as Detroit’s Khaos Williams scored a second consecutive quick knockout, this one over Abdul Razak Alhassan, making it a total combined fight time of 57 seconds for “The OxFighter” in the Octagon.

Williams opened the fight with a trio of kicks to the leg, and then out of nowhere, he unleashed a straight right hand that landed flush on the jaw, knocking Alhassan out. The official time of referee Mark Smith’s stoppage was 30 seconds.

A week ago, lightweight contender Paul Felder was preparing for a March triathlon. Tonight, he was in the UFC Fight Night main event against former champion Rafael Dos Anjos, and despite having his moments and delivering his usual gritty effort, it was RDA making a successful return to the 155-pound weight class with a five-round split decision victory.

Both fighters were throwing heat from the start, wasting no time getting down to business. Dos Anjos landed some hard kicks, and while a punch from Felder subsequently cut the Brazilian over the eye, he soon found himself on his back after a takedown from RDA. Midway through the round, Felder got back to his feet and the striking battle resumed. Felder was sharp and fast with his strikes, but Dos Anjos was still holding the edge in the grappling exchanges, and a hard left just before the horn got the attention of “The Irish Dragon.”

Felder’s varied striking attack got the second round off to a good start for him, leading Dos Anjos to look for another takedown that came up empty. RDA wasn’t having any issues on the feet, though, as he threw and landed several hard punches and kicks, leading to some high-level exchanges. With under two minutes left, Dos Anjos got his takedown, and while Felder rose before taking any damage, the Brazilian stayed locked on to him until the final seconds of the round.

Dos Anjos continued to focus on his grappling game in the third round, scoring two takedowns, and while Felder gamely looked for daylight, those moments were becoming few and far between as the bout approached the championship rounds.

Felder had a strong comeback in the fourth, both on his feet and with a late takedown, but the blood was flowing from his forehead thanks to a Dos Anjos left hand, prompting a visit from the Octagonside physician, who gave him the green light to continue.

With five minutes left, Felder continued to press the action on the feet, but in the clinch against the fence, it was still all Dos Anjos, and in the second minute, he put Felder on the mat again. With a little over a minute remaining, Felder got to his feet, Dos Anjos attached to him, and that’s the way the fight remained, RDA getting one more takedown before the fight ended.